With Harold Larwood, Bill Voce was one half of one of the great fast-bowling partnerships – but he almost became a spinner. He was a Wisden Cricketer of the Year in 1933.

William Voce, the Notts left-handed bowler, was born at Annesley Woodhouse on August 8, 1909, so that like F.R. Brown, of Surrey, he is one of the youngest cricketers of the MCC team now in Australia.

His early cricket was what might be called rather primitive, for he played with a lot of other young lads for the Annesley Colliery team. At that time he bowled medium pace.

His abilities and promise were brought to the notice of the authorities at Trent Bridge, to which ground he went in 1926 for a trial. It was quickly seen that a bowler of distinct possibilities had been discovered and he obtained a position on the staff and came under the direct control of James Iremonger, from whom he received much valuable advice on the game.

He gained his place in the Notts eleven in 1927, taking part in 19 matches for the county and obtaining 36 wickets. At that time he had moderated his pace and was definitely a spin bowler, and everybody who saw him thought at once that here was a young cricketer likely to take front rank and possibly to follow in the footsteps of Wilfred Rhodes and Colin Blythe in even more important cricket.

Just about this time he must have been sorely exercised in his mind as to what type of bowler he would ultimately become. He found himself on the horns of a dilemma, for, while certain prominent members of the Notts eleven were advising him to stick to spin bowling pure and simple, others urged him to bowl fast and develop a swerve. In the end, he adopted the latter course.

He has met with considerable success but many fine judges of the game still aver that he would have attained greater fame had he remained a spin bowler on the slow side of medium. As it is quite likely the best has not yet been seen of him, it is a question which school of thought in this matter was correct.

Tall and strongly built, Voce can maintain his pace for a long period and, at his best, is undoubtedly a difficult player to face. But here again another controversy as to his methods has arisen. Walter Brearley, for instance, whose opinion on fast bowling few, if anybody, would care to question, is strongly of opinion that if Voce regularly bowled round the wicket from just inside the return crease, he would be even better than he is.

Generally, however, Voce now bowls over the wicket, relying for his success either on his swerve causing batsmen to turn the ball into the hands of one of the numerous fieldsmen on the leg side, or else on an occasional break-back to hit the stumps. 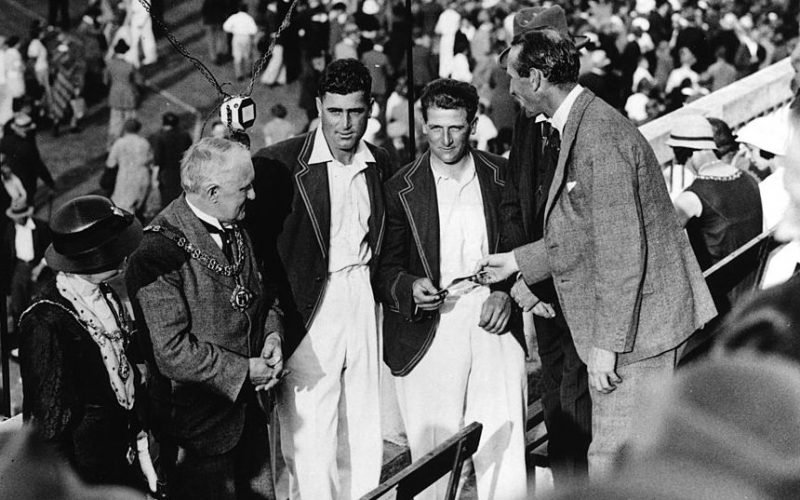 Bill Voce and Harold Larwood are felicitated by Douglas Jardine at Trent Bridge, circa 1938

In his second year in the Notts eleven he took 56 wickets but was a little expensive. During this season of 1928 in the match against Hampshire at Bournemouth he had strong inducement to concentrate upon spin bowling. He had been bowling at his quicker pace when it was suggested that he should try and spin the ball. He did so and proved so successful that he took seven wickets for 39 runs, Hampshire being all out for 194 after the score had been up to 150 with only three wickets down.

Pronounced improvement came in 1929 when he finished at the top of the bowling averages with 107 wickets for 16 runs apiece. He was not so good the following season, the number of wickets he took falling to 76, but in batting he gave proof of being able to hit very hard.

From the archives, 10 of the all-time great bowling pairs.https://t.co/hCEYiet1Hh

In 1931 he stood second to Larwood with 101 wickets for just under 17 runs apiece and last season the relative positions of the two men were the same, Voce taking 106 wickets at a slightly less cost than in the previous summer.

In 1931 he played for England against New Zealand at Lord’s and last season he appeared in the Test match against All India, bowling well and taking five wickets in the two innings. It was confidently expected that he would be chosen for one of the representative encounters against the Australians in this country in 1930 and the story is told that the Australians themselves were apprehensive of his inclusion.

So, when they met Notts at Trent Bridge just before the Third Test match they decided, whatever the cost, to try and prove, by devoting their energies to hitting him, that Voce would be unsuccessful against them. McCabe and Richardson carried out their task with conspicuous success and in the second innings of that match, Voce took only one wicket for 112 runs.

In this way, the Australians effected their purpose. At any rate our selection committee, no doubt influenced in their minds by his ineffectiveness on this occasion, did not consider him for any of the remaining Test matches that season.

In the winter of 1930/31, he was one of the MCC team to visit South Africa and in the Test matches took 23 wickets for 24 runs apiece. On the matting wickets, he was very good indeed.

When Wisden wrote that Voce was “now in Australia”, there was no hint that he was at the heart of England’s Bodyline assault. He took 98 Test wickets in 27 matches at 27.88.