Colin Blythe, the Kent and England left-arm spinner, was killed in action on this day in 1917. He was the most famous of all the cricketers who died during the First World War. Wisden editor Sydney Pardon paid this tribute in 1918.

The news that Blythe had been killed in France was received everywhere with the keenest regret. In as much as Kenneth Hutchings had practically done with the game before joining the Army, the loss is the most serious that cricket has sustained during the war.

It is true Blythe had announced his intention of playing no more in first-class matches, but quite possibly this decision was not final. He had certainly no need to think of retiring at the age of 38. That Blythe was a great bowler is beyond question. He had no warmer admirers than the many famous batsmen who had the satisfaction of making big scores against him. So far as I know they were unanimous in paying tribute to his remarkable powers. 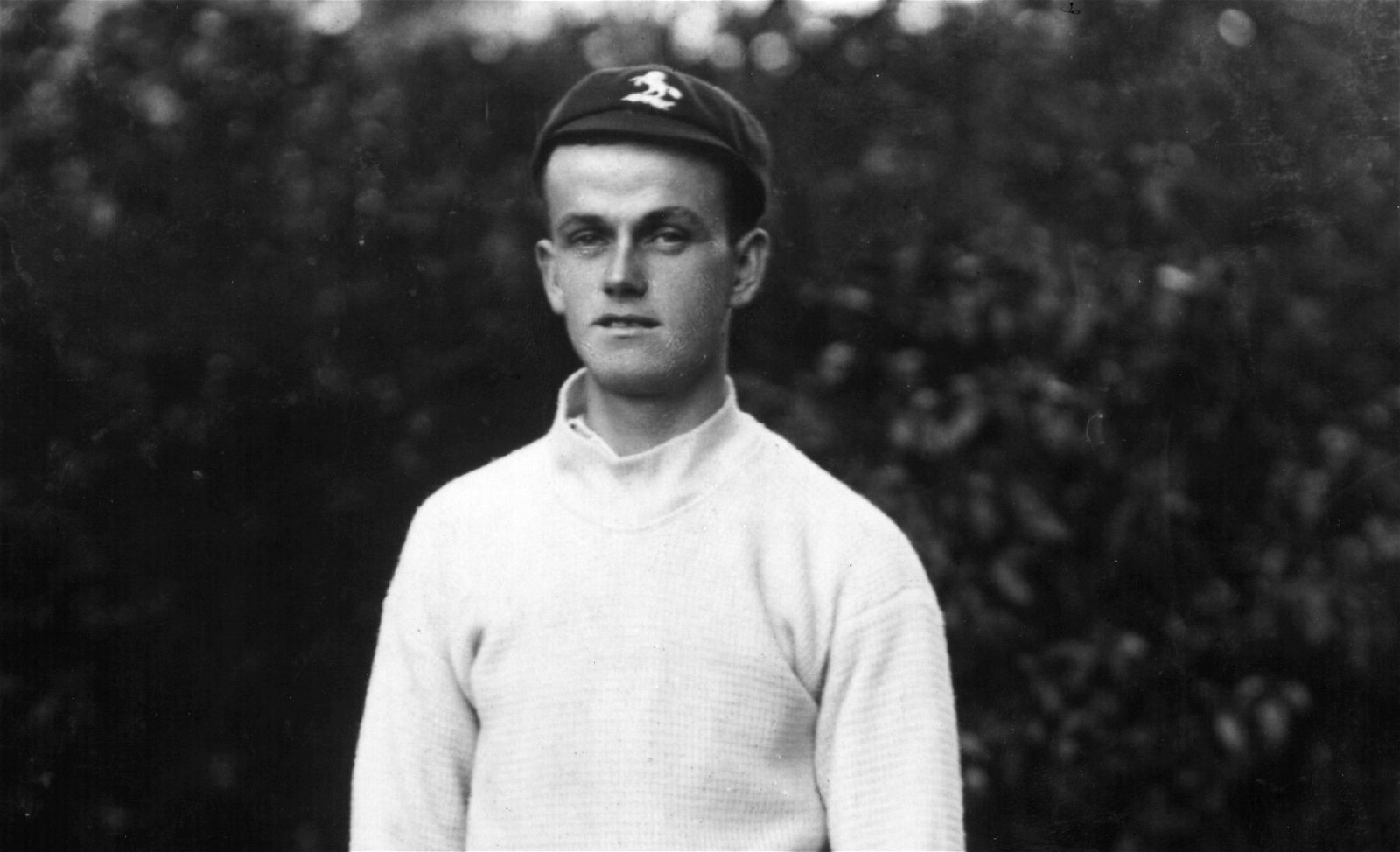 Colin Blythe was killed in Passchendale. Photo circa 1915

He was one of five left-handed slow bowlers of the first rank produced by England in the last forty years, the other four being Peate, Peel, Briggs and Rhodes. To place the five in order of merit is a task I shall not attempt. The best experts, if asked to give an opinion on the point, would vary considerably in their views. For example, W. L. Murdoch thought Peate far ahead of either Peel or Briggs, whereas Arthur Shrewsbury found Peel harder to play than Peate, the fast ball that Peel had at command keeping him always on the alert.

Again I have heard Ranjitsinhji say that he considered Blythe a finer bowler than Rhodes, the deceptive flight of the ball making him more difficult to hit. To these views I would only add that judging by the practical test of results a good case could be made out for Rhodes as the best bowler of the five – before he turned his mind to batting. The seasons in which he did such wonderful things for Yorkshire – 1898 to 1901 inclusive – were seasons of fine weather and huge scoring. Peate’s great deeds were done chiefly in summers of rain and bad weather. 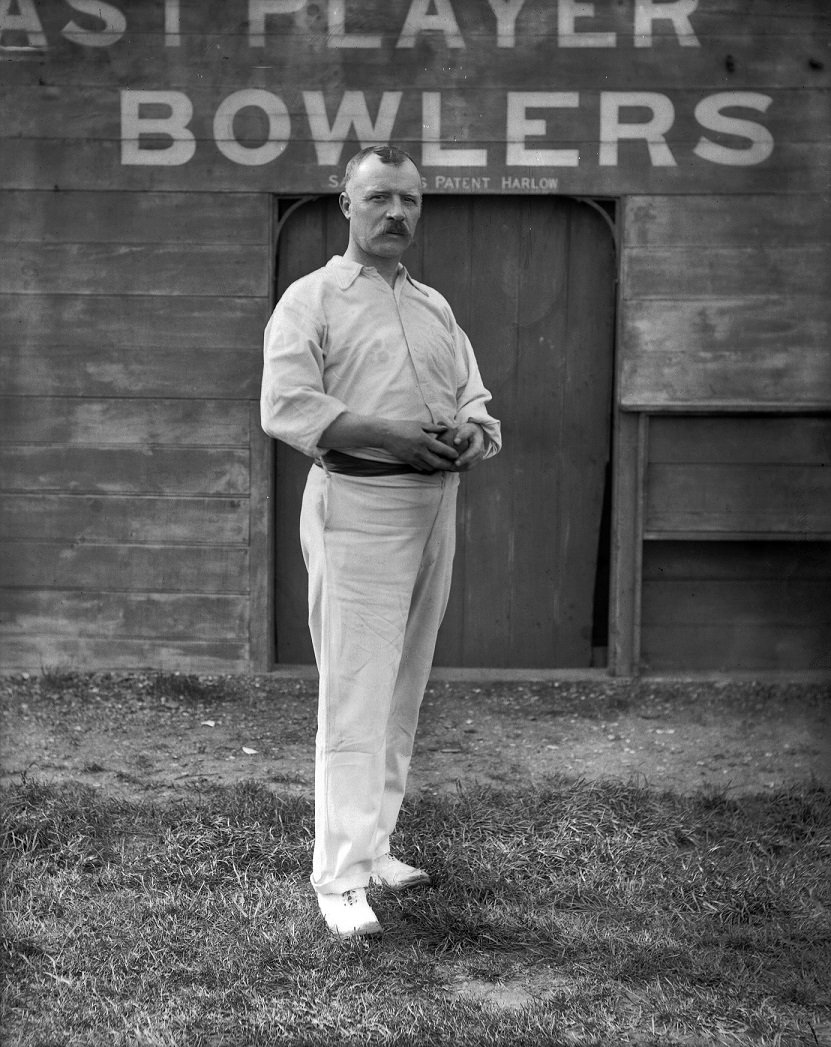 Blythe had all the good gifts that pertain to the first-rate slow bowler, and a certain imaginative quality that was peculiarly his own. Very rarely did he get to the end of his resources. To see him bowl to a brilliant hitter was a sheer delight. So far from being disturbed by a drive to the ring he would, instead of shortening his length to escape punishment, send up the next ball to be hit, striving of course to put on, if possible, a little extra spin. In this respect he reminded me of David Buchanan in the Gentlemen and Players matches of long ago.

Related Story: The summer Clarrie Grimmett arrived as Australia’s match-winner – Almanack
Blythe’s spin was something quite out of the ordinary. On a sticky wicket or on a dry pitch ever so little crumbled he came off the ground in a way that beat the strongest defence. He had, too, far more pace than most people supposed. The ball that went with his arm often approached the speed of a fast bowler and had of course the advantage of being unsuspected. On this point Fred Huish, the wicketkeeper, can be very illuminating.
He will live in cricket history as the greatest Kent bowler of modern days

Blythe was introduced to Kent cricket by Captain McCanlis, one of the best coaches the game has known. He was 20 years of age when he first played for Kent, and in 1900 – his second season – he took 114 wickets in county matches alone. Illness during the winter affected his bowling in 1901, but after his visit to Australia with the team captained by A. C. MacLaren in 1901-2 he never looked back.

His best season was 1909, when he took in first-class matches 215 wickets, at a cost of 14-and-a-half runs each. A list of Blythe’s feats with the ball for Kent would fill a column. Against Northamptonshire, at Northampton, in 1907, he obtained seventeen wickets in one day, taking all ten in the first innings for 30 runs, and seven in the second for 18.

Test matches, owing to his tendency to epileptic fits, were very trying to him, and after having had a big share in England’s victory over Australia at Birmingham in 1909 he was practically forbidden to play at Lord’s. Still he was, out by himself, England’s best bowler in the three matches with the famous South African team of 1907, taking twenty-six wickets for less than 10-and-a-half runs a-piece. Only one of the three matches was finished, England winning at Leeds by 53 runs. Blythe on that occasion bowled himself to a standstill, but he had his reward, clearly winning the game for his country. 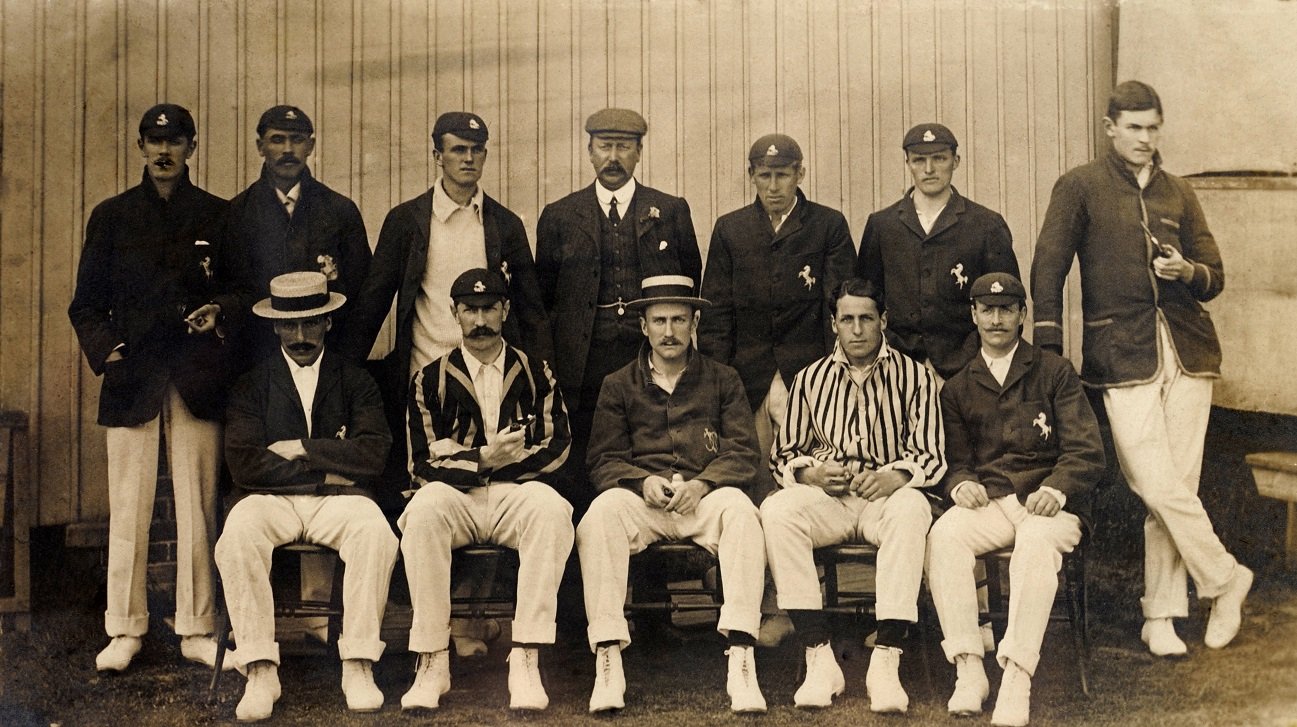 Kent CCC, photographed at Tunbridge Wells, 1905. Blythe is back row, third from left

Blythe’s reputation will rest on his doings in England. His two visits to Australia scarcely added to his fame, and when he went to South Africa in 1905-6 and again in 1909-10, he did not find the matting wickets altogether to his liking. In the second of his South African tours he had a fairly good record, but as he was only picked for two of the five Test matches, he could not have been at his best.

To sum up his career in a phrase, he will live in cricket history as the greatest Kent bowler of modern days. Nearly all his finest work was done for his county. It is pleasant to know that the Kent Committee have decided to put up a suitable memorial to him.