Bill Bowes was one of the leading seamers in English cricket in the 1930s. After his breakthrough season in 1931, he was named a Wisden Cricketer of the Year.

William Eric Bowes, the Yorkshire fast bowler who, with his colleague, Verity, helped so considerably towards the success of his county in carrying off the Championship last season, was born at Elland on July 25, 1908.

Curiously enough, his introduction to county cricket was not, like that of so many men, direct. He played first for the Armley Park Council School, and the West Leeds High School, and afterwards took part in Yorkshire Council cricket for Kirkstall Educational. Although he had been at the nets at Leeds under George Hirst, very little was known of him in Yorkshire until he began to attract attention by some useful performances for the MCC.

He came to Lord’s in 1928 in answer to the advertisement sent out by the Marylebone Club when they decided to get together as a staff at Lord’s a number of young cricketers. In his first year there, he earned fame by doing the hat-trick for the club against Cambridge University. So promising was his form that, in the following year, the Marylebone Club entered into a nine years’ agreement with him.

Naturally, his doings soon came to the ears of the Yorkshire authorities and leave was obtained for him to assist the county when circumstances permitted. MCC acted very generously in the matter and in 1929 Bowes, bowling in 13 innings for Yorkshire and taking 40 wickets, finished second to Rhodes with an average of 17.

In the following season, his services were still further utilised by the county and he again finished second in the bowling averages, obtaining 76 wickets for less than 17.5 runs apiece. 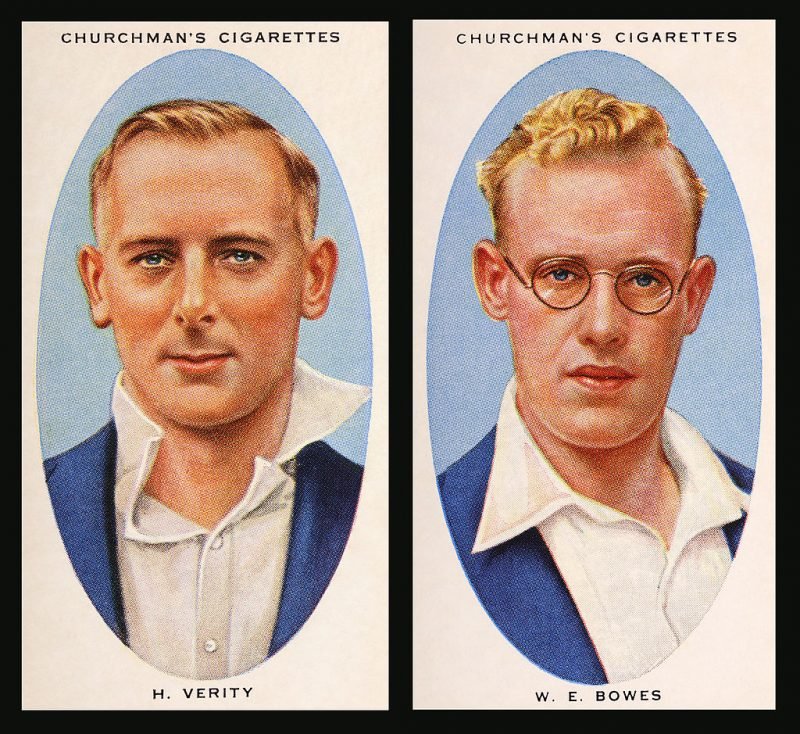 Last summer he was just behind Verity, with 109 wickets at a cost of under 15.5 runs each and, in addition to the many matches he played for Yorkshire, he appeared for the Players against the Gentlemen both at the Oval and at Lord’s.

By this time it was well recognised that in Bowes, Yorkshire and the MCC possessed between them a fast bowler of considerable ability. In the course of the summer he credited himself with many fine performances and at the end of the season came to be looked upon as only second to Larwood in his particular class.

Bowes plays in glasses but that apparently is little or no handicap to him. Tall and somewhat loosely-built – in fact almost angular – he does not at first sight create the impression of being a likely kind of bowler but as to his powers there can be no question. With a high action he makes the ball swerve, but he owes most of his success to the manner in which he is able to get pace off the ground, together with a decided lift.

On a wicket with any life in it, he can be most effective and he is very good at dismissing one or two batsmen to begin with, while few bowlers are more likely to break up a partnership, say, late in the day by one of these balls that come fast off the turf and get up among the knuckles of an opponent’s hand. Still young and strong, there seems every reason to anticipate further honours for this very useful and promising cricketer.

Bill Bowes made his Test debut in 1932, and was a key member of the England attack on the Bodyline tour the following winter. He took 68 wickets at 22.33 in 15 Tests. After retiring as a player, he became a well-known journalist.