Anil Kumble became one of the great spin bowlers of all time for India, but it was a season in county cricket that earned him a Wisden Cricketer of the Year award in 1996.

The summer of 1995 saw a pleasing contrast between international cricket and the domestic game. The Test series between England and West Indies was so dominated by pace bowlers, on both sides, that spinners took less than a tenth of the wickets. In first-class cricket, on the other hand, the two leading wicket-takers were Asian leg-spinners: Mushtaq Ahmed with 95 wickets, and Anil Kumble with 105.

Kumble thus became the first bowler to take 100 wickets since 1991; the first spinner to do so since 1983; and the first leg-spinner since 1971. But only nominally can Kumble be classified as a leg-spinner, for he does not specialise in temptations that end in a stumping, or a catch at long-off, and a deceived bat slammed against pad. He is a bowler of his own kind: a brisk top-spin bowler, making the ball turn a little both ways; tall at 6ft 2in and dangerously bouncy on a hard pitch; and as persistently accurate in finding his target as a mosquito.

Not one of his 105 victims was stumped. Twenty were leg-before and 21 bowled, most of them making the mistake of thinking they had time to play back to this leg-spinner. All the rest were caught, seldom in the deep, largely by Richard Montgomerie at short leg, David Capel at slip, Rob Bailey at silly point and Kevin Curran at gully. Kumble paid tribute to them all, and to Bob Carter who conducted their practices, for fulfilling such a demanding task without previous experience of such bowling.

Over the first-class season he conceded 2.3 runs per over, and then the bat’s edge was frequently the scorer: at times a whole session would pass without Kumble conceding a boundary in front of the wicket. He bowled more overs than anyone else as well, except Mushtaq; and as his Indian compatriots at Gloucestershire and Durham, Javagal Srinath and Manoj Prabhakar, were equally hard-working, together they did much to change the perception of Indian players, hitherto not renowned for their stamina, in county cricket.

After the NatWest Trophy final at Lord’s when Kumble turned on what he thought was his best one-day bowling of the season, Warwickshire’s captain Dermot Reeve summarised the impression of all English cricket when he declared that Kumble was “a fabulous bowler”.

There is only one bowler of the last generation to whom he could be compared. But as Anil Kumble was born on October 17, 1970, in Bangalore, he was too young to have studied Bhagwath Chandrasekhar and did not take him as a model. However, the conditions which prompted Chandrasekhar to bowl medium-paced top-spinners and googlies were those that governed Kumble’s development.

Club cricket in Bangalore is played on matting spread over baked mud (Kumble still occasionally turns out for his club, Young Cricketers), and the springy rather than fast surface can make a top-spinner bounce exceptionally. Kumble smiles at the recollection of wicketkeepers who were apprehensive about standing up to him. As in the case of Chandra, the batsman can sometimes hear the ball fizz after leaving Kumble’s hand – although it is no easier to play for being audible as well as visible.

Kumble’s father, a management consultant, had not played the game formally. Anil began by playing tennis ball cricket in the streets outside his house, a form of the game which has organised tournaments there. He moved on to bowl medium-pace until his conversion at 15, when for one reason or another, his elder brother Dinesh persuaded him to try leg-spin as a novelty, even in southern India. “There was no one to guide me or coach me or show me how to grip the ball,” Kumble remembers. But with a long and energetic arm-swing, and powerful shoulders, he could soon make it bounce like a tennis ball.

He was rapidly selected for Karnataka Schools Under-15, then for Karnataka in 1989/90, when Chandra was in his last year as a state selector. On the 1990 tour of England he made his Test debut at Old Trafford, aged 19, as a bespectacled No.10 (he has since shed the glasses for lenses, and his lowly status in the order, making hundreds for Karnataka). His first Test wicket was Allan Lamb, caught at silly point, which had long-term consequences. 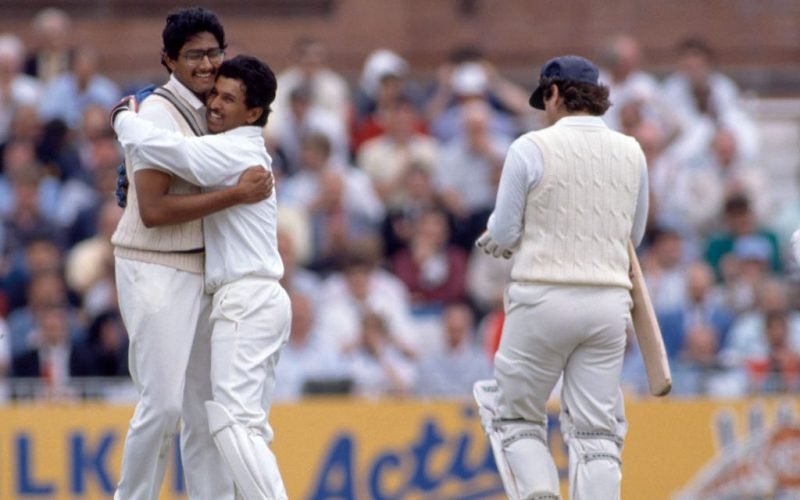 Anil Kumble is congratulated by Kiran More after he gets Allan Lamb for his maiden Test wicket at Old Trafford, 1990

His 100th came in his 21st Test, on his home ground in Bangalore. In home Tests he often had turning pitches to bowl on, and large Tendulkar-fed totals to bowl at, but that is still a fine record: Shane Warne took two more Tests to reach his 100. His Indian captain, Mohammad Azharuddin, phoned Lamb to recommend Kumble when Northamptonshire wanted to replace Curtly Ambrose; and when the county contacted him at a Madras hotel, he accepted without even discussing terms.

Kumble’s aim in undertaking county cricket was to develop his variety and to learn more about pitches, with a view to India’s tour of England in 1996. This ambition he fulfilled. While he kept to his lower trajectory and faster speed for one-day matches, in the Championship he bowled more slowly than hitherto, and turned the ball sideways both further and more often, not just fizzing it through. He would bowl six googlies in an over against a left-hander.

His county did their best to make Northampton’s pitches as similar as possible to Bangalore. He took 64 wickets at 16 runs apiece at Northampton, and 41 wickets at 27 elsewhere. If he sometimes had to come on before the seam bowlers had taken a wicket, he was always accurate, and calm, as native Kannada-speakers are reputed to be.

“I’m very satisfied with my season,” he declared afterwards, and so were the county, who failed to win that elusive Championship through no fault of their overseas signing. Unmarried, teetotal and vegetarian, a graduate in mechanical engineering and speaking excellent English, Kumble would join in with his team-mates at the bar, even if taking soft drinks. They would have him back any time he can get away from his public relations job for Triton Watches, his employers in Bangalore; and from the Test match game so dominated by seam.