Yas Rana looks back at the innings in which Sam Curran announced himself as a force to be reckoned with in international cricket.

There were 170 occasions in 2018 when a batsman scored more than Sam Curran’s 63 at Edgbaston, but none were more edge-of-the-seat exciting, or as pivotal to their side’s hopes.

Context, as always, is key. Despite India’s recent dominance in Asia and their position at the top of the ICC Test Rankings, they hadn’t won a series outside Asia or the West Indies since winning 1-0 in New Zealand in 2009. England, meanwhile, had won just one of their last nine Tests, including a 1-1 draw at home to Pakistan – they were as vulnerable as they had been in a long time.

India need 194 to win with Sam Curran ending his brilliant innings on 63.

Here's how he reached 50, smashing Ishant Sharma for six over cover.pic.twitter.com/1WfUkmy2kx

Curran’s innings began with India surging, a three-wicket over from Ishant Sharma leaving England 87-7, leading by exactly 100. He started streakily – he was lucky to survive one particular Mohammad Shami over in which he twice edged the balls through the slips.

But when Umesh Yadav bowled Adil Rashid to leave England 135-8, the lead still not at 150, something clicked, and Curran entered a dreamlike state of nerveless hitting that tilted the game decisively in England’s favour.

First he guided an Umesh Yadav delivery past the slips before emphatically showing his intent by launching Ravi Ashwin for a huge straight six. He nearly repeated the trick the very next ball, drilling another Ashwin delivery straight down the ground, this time for four. 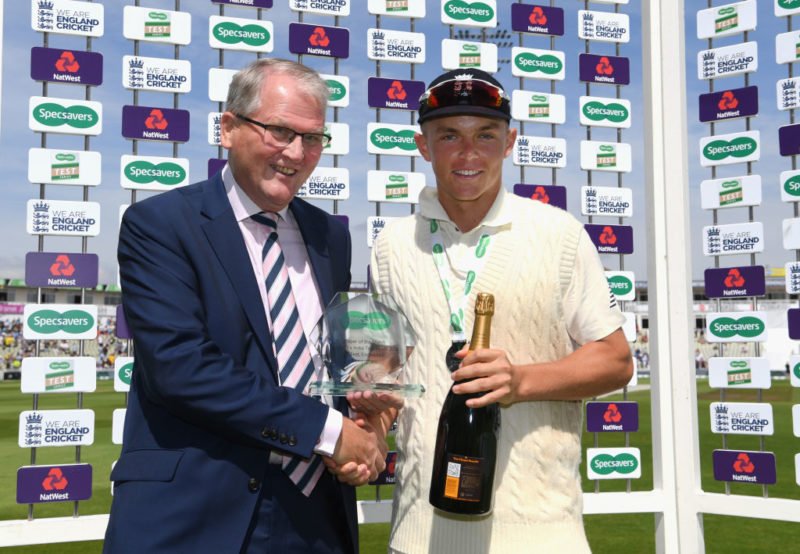 Then, off Ishant Sharma, came the shot of the summer. Curran, all of 20 years old, playing in his second Test match and without a first-class hundred to his name, shimmied down the wicket, gave himself room and deposited a straight ball over extra cover for six to bring up his maiden Test half-century. Edgbaston rose as one.

After the game he credited watching Virat Kohli bat so effectively with the tail the previous day and the advice of his former Surrey teammate Kumar Sangakkara about his approach to batting with the lower order for his effort. This was a knock which either of them would have been proud to play.

Curran’s 63 was ultimately crucial as England defended 194 to win by 31 runs. It was the decisive hand in the tone-setting Test in the biggest series of the year, but it was also so much more.

There is nothing more exciting in sport than the arrival of a prodigy on the world stage. Not yet scarred by failure, those blessed with the gift play as if they’re totally oblivious to the possibility or consequences of it. This was Curran announcing himself as one of the most significant talents England have seen in some time.