India fans rocked the 2019 World Cup with their own brand of vibrant and, at times, intense fanaticism, slowly reverse-colonising England. Anand Vasu, in the 2020 Wisden Almanack, put it down to sheer bloody-mindedness.

India might not have won the World Cup, but their fans lorded it over the tournament. This was clear from their first game, against South Africa at Southampton, when a train full of blue jerseys headed south from Waterloo. In the stands, the effect was more extreme, and fans could be divided broadly into three categories – Indians from India, Indians from the UK, and Indians from America and elsewhere.

Indians from India have not always travelled abroad in large groups, but the Bharat Army have changed that. Despite ICC figures suggesting only 4% of World Cup ticket buyers lived in India, this group were the most vociferous – the likeliest to wear masks of nationalist prime minister Narendra Modi, and chant “Mandir Yahin Banega” (“the temple will be built here”), a reference to right-wing Hindus wanting to develop the site of the demolished Babri Masjid mosque in Ayodhya, Uttar Pradesh.

British Indians tended to be found in smaller clusters, and lingered longer in the beer tents. Those from America (home to another 4% of buyers) gave themselves away by their accents. But whatever their origin, they turned up in huge numbers. Four days later, against Australia at The Oval, the joke was that the only yellow in the crowd came from the fluorescent jackets of the stewards. Officially, 32% of all tickets were bought by supporters of India.

How did they become so dominant? Mostly, it seems, through old-fashioned doggedness and innovation. Take Akshay Natarajan, an investment banker from London who extended his sabbatical to watch the World Cup. Before it began, there were two ballot windows, but he failed to get tickets in either. “I could not stand the thought of a World Cup in my backyard without going to an India match, so I stumped up £750 for a hospitality ticket for the India-Australia game,” he says. But his luck improved, and he eventually attended nine league games (including India’s first five), their semi and the final.

“I got my tickets mainly by patrolling the ICC resale website,” says Akshay, who discovered there was most liquidity in the top-end (platinum) and lowest-end (bronze) tickets. “You had to check it every 15 minutes or so and, when you did get in a queue, it took as long as five hours for your turn to actually buy a ticket. I did this because I had the time and inclination, but there were entire Indian families living here who did it as a business. Every member of the family would be logged on, in shifts, and as soon as tickets became available they would add to their basket and put them up for sale on a WhatsApp group.” 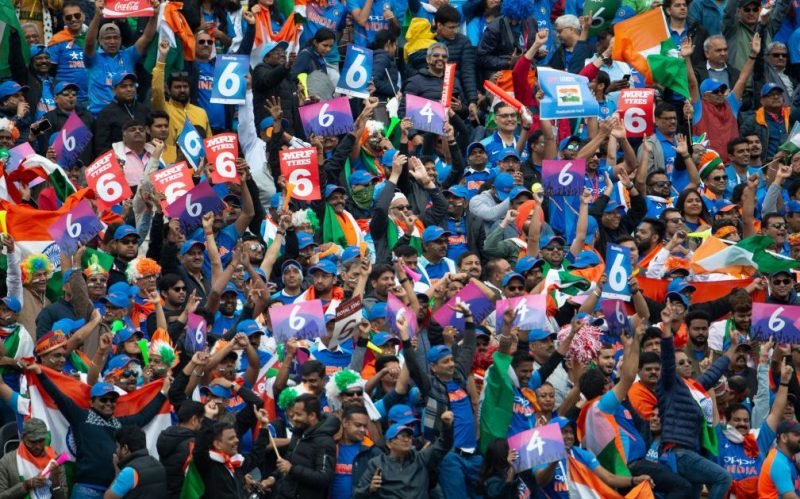 Akshay monitored three such groups, which had as many as 500 members. But getting to so many matches came at a price: tickets at face value, food and drink, and train travel all added up to nearly £2,500.

Others paid touts far more. One young man from Delhi wanted to propose to his girlfriend in the stands at India v Pakistan, and paid £10,000 for a pair of tickets (she said yes). Another, on a work trip in Europe, took a week out to attend five matches, each in a different city. When he arrived home, in San Francisco, he discovered a ticket had become available for the Pakistan game, so flew to Manchester on the morning of the match, then flew straight back after the last ball.

Sheer bloody-mindedness – that was the story behind India’s fans reverse-colonising England, one ground at a time.