In issue 16 of The Nightwatchman, Rob Johnston waxed lyrical about the tradition of winter net sessions.

Cricket is a game built on hope. Never is that hope greater for club players than during winter nets, a time of promise and future glory. Yet those emotions were far from my mind one cold and dark Sunday in February about 15 years ago. My only hope was that I would get out of the session with my pride and body intact.

I was 15 or 16 and had made my debut for the second team of my club the previous summer. I had obviously showed something in the previous few nets as I was invited to bat in the first-team lane. It would be ten minutes I would never forget.

We used to train during the winters in a school sports hall. It had three lanes and a quick and bouncy indoor surface, totally alien to the players at the club. We were used to toiling away on a slow and low pitch more reminiscent of Mumbai than Perth, and that day the sports hall felt a hundred times quicker than the WACA.

Our first team at the time had a good side, full of hardened club cricketers who had been promoted to Division One of the Essex League. These boys could play and the team was built around two blokes who had joined the club as overseas players but who had liked England so much they decided to stay. They were all-rounders: a Kiwi and a Zimbabwean, both of whom bowled quick and batted well. 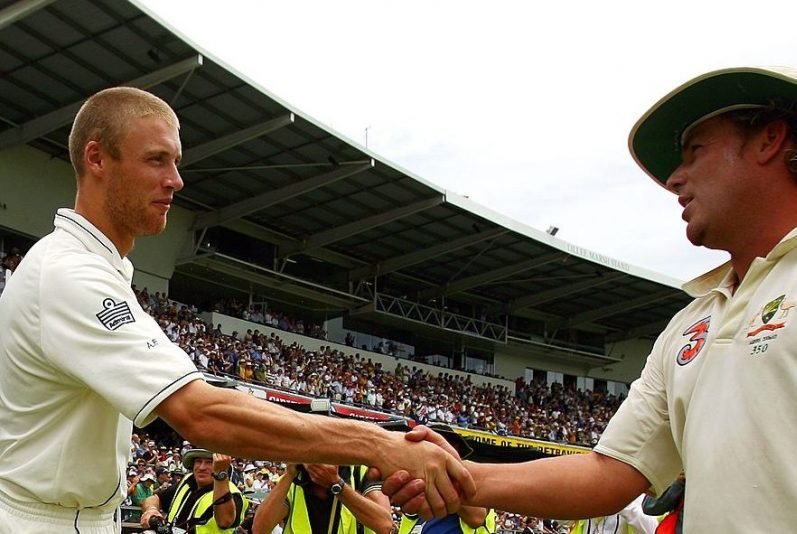 Andrew Flintoff shakes hands with Shane Warne at the WACA

I remember walking down to the batting end, nervous as I had ever been. I don’t think it’s cowardly to admit that I was scared I’d be hurt. For the first few balls, I saw a blur of dark red shoot past my body. These balls were of a good length, not short, but quick. After a couple of plays, and misses, I started to see the ball clearer, even if I still had not hit one.

The New Zealander was a tough brute of a player. He was big and hairy, an intimidating presence on the field but a gentleman off it. His third or fourth ball to me was a bouncer that whistled passed my helmet. I managed to get out of the way – just. “Don’t back away to the next ball I bowl you,” was all he said. Great, I thought, I know what’s coming next.

Another short ball. Too quick for me to play a shot at but I dropped my hands and swayed out of the way. “Well played,” he said, two words I’ll never forget.

The Zimbabwean was a class batsman, compact and technically perfect, who scored a mountain of runs for us but could also bowl. Whilst I was getting peppered by the Kiwi, he was swinging the ball round corners: play and miss followed by play and miss.

For club cricketers, training throughout the dark winter months is simply a part of the cricketing year

I remember being furious with myself. I hadn’t hit one ball out of the middle all net. After each delivery, he would have a look or a reassuring word but he would not ease up, bowling quickly and showing no mercy.

After I had had my ten minutes, the two guys patted me on the back and I got some tips. I think they were impressed I hadn’t shirked the challenge, even though I had been evidently out of my depth. I batted a few more times in the first-team net that winter and it made me better.

For club cricketers, training throughout the dark winter months is simply a part of the cricketing year. Winter nets in sports halls are part of the fabric of cricket but unlike proper cricket. There is no pressure in the nets, no fielders to catch you out. If you get bowled you can face another ball and if you bowl a long-hop it doesn’t cost you a four.

The bombardment I faced from the two overseas players was panic-inducing at times but after that initial session, facing them again was strangely enjoyable because I knew I could get bowled a hundred times and it wouldn’t matter. I was trying desperately not to get bowled, but if I wasn’t good enough, so be it. I could carry on trying to be better and carry on batting. 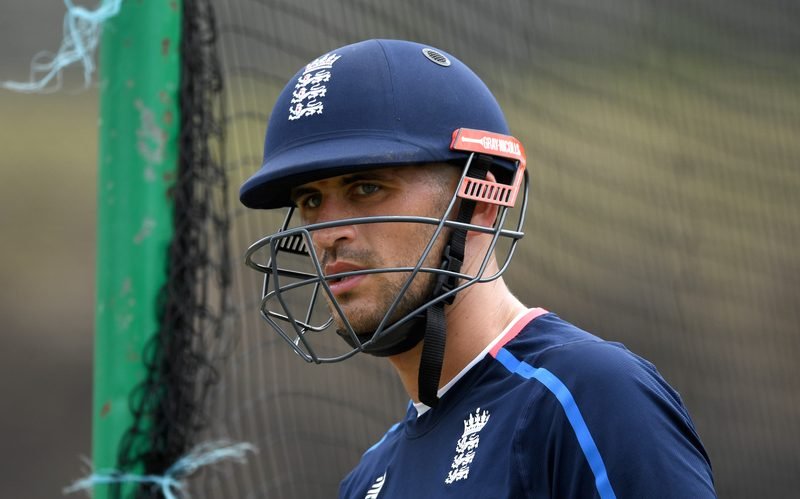 Alex Hales waits to bat during a nets session

Hope is greatest during this time because of that lack of pressure. The cover drive you hit rather uppishly into the net felt good, you weren’t caught and you hit it hard. So it went for four, right? Suddenly, you have hit eight of those in your ten minutes which leads you to think … maybe this will be the year. You forget that six of those shots would have been caught in a game.

Whilst the seasons move on, the winter net routine barely changes, with the same rhythms, sounds and characters year after year. It’s comforting to know that after a few months off, you can return to cricket and know what you’re getting from it, at least until the season starts.

There is a uniform that most, if not all, will adhere to: in older times it was full whites, and some in the older generation still maintain those standards, but now it is usually tracksuit bottoms coupled with your club shirt, if you can remember where you packed it away at the end of September. Perhaps you wear it with your club jumper too; it is winter after all.

As much as the cricket, winter nets are about the characters. New players will turn up. Some will appear for one session, never to be seen again and others will net, happy to commit to an hour a week in the winter, but who can’t be away from their families for longer and so are never seen during the summer months. If you’re lucky, some might hang around and actually turn out on a Saturday.

For those that stay the course, there is yet more hope. There is hope for the club that maybe the new player can add that missing ingredient desperately needed, whilst the new recruit will want to contribute on and off the field, do well and perhaps find something special to be a part of, new friends and a sense of belonging.

Another certainty is that at least one player who used to play for the club will turn up to winter nets. Their kids might have grown up or they might want to get a bit fitter so they turn back to the game they love, arriving in January to see if they can still cut it, reliving past glories and hoping they have another season in them.

Then there are the regulars who never miss a session. They are the lifeblood of winter nets, ever-present even when there is football on TV or it is Mother’s Day, and deservedly wear their full attendance as a badge of honour. In my experience, these are the players who do most to lend a hand off the pitch too and are the lifeblood of any local cricket club.

In the first-team net, the second-team young fast bowler might get a go, just like I did all those years before. He may have pace, but then so does everyone on an indoor school hall quicker than any ground in the world, where even the pensioners of the club can rush you on the hard green surface, covered with lines for five-a-side football and netball pitches.

The youngster may show his worth with a bouncer, perhaps giving the batsman a smile as he retrieves the ball. The batter will think that if it was back at the club ground, the bowler would be fishing it out of the Thames Estuary, but everyone else thinks that maybe the young gun has put on a yard or two and wonders if he could be the next big thing?

You can experiment in winter nets without fear of reprisal. During the short days of the English winter there is a lot of cricket going on around the world. On the television, Steven Finn bowls like the wind in Johannesburg or Glenn Maxwell plays a ramp shot in front of 90,000 spectators at the MCG. The same afternoon, those things are attempted in a school hall in Southend-on-Sea.

It’s fun to try new shots and deliveries never attempted before in a game. You can laugh and enjoy it and embrace the freedom. Successfully attempt a ramp shot in the nets and, unlikely as it seems, you can feel for a moment that perhaps it is the one shot your repertoire has been missing all these years. In reality, daring to play it in a match has consequences but, in the middle of winter, freedom can be found in those nets.

As the season approaches, thoughts turn away from ramp shots to selection, matches and tactics. The blissful simplicity of winter nets fades from memory to be replaced by the frustration and expectation of weeks without taking a wicket and runs of low scores.

But come the following January, the renewed sense of hope will be back, as regular as clockwork. Yes, this really could be our year. I’d better get down and have a hit. The season is only a few months away.

This article appears in issue 16 of The Nightwatchman. Available in print and digital editions.