Nottinghamshire head coach Peter Moores on laying a platform on which to improve your game.

The first thing I say to anybody who wants to play the game and wants to get better is that the skills don’t change particularly as you move up the levels – it’s the pace at which you’ve got to do them that changes. That’s the big difference. In top-flight sport in general, it’s the basics done at pace. And those basics are things you can’t get away from.

Whether you’re batting, bowling or fielding, the first fundamental is balance. As a batter your head should be somewhere roughly inside your shoulders, both eyes level, going towards the bowler. A lot of the amateur batters that I watch are going towards extra-cover.

The second basic of batting is alignment and alongside that comes rhythm, which is almost the forgotten art of coaching. Rhythm means you’re relaxed – no one can play well if they’re uptight. When you first go into bat you’re going to be a bit uptight because it’s the start of your innings. You’ve got to find a way to relax to get through that and know that you’re only going to focus on the simple things: watching the ball and your balance. As you develop your skills you’ll look more at things like playing late, letting the ball come to you, but the key initially is to keep it simple. 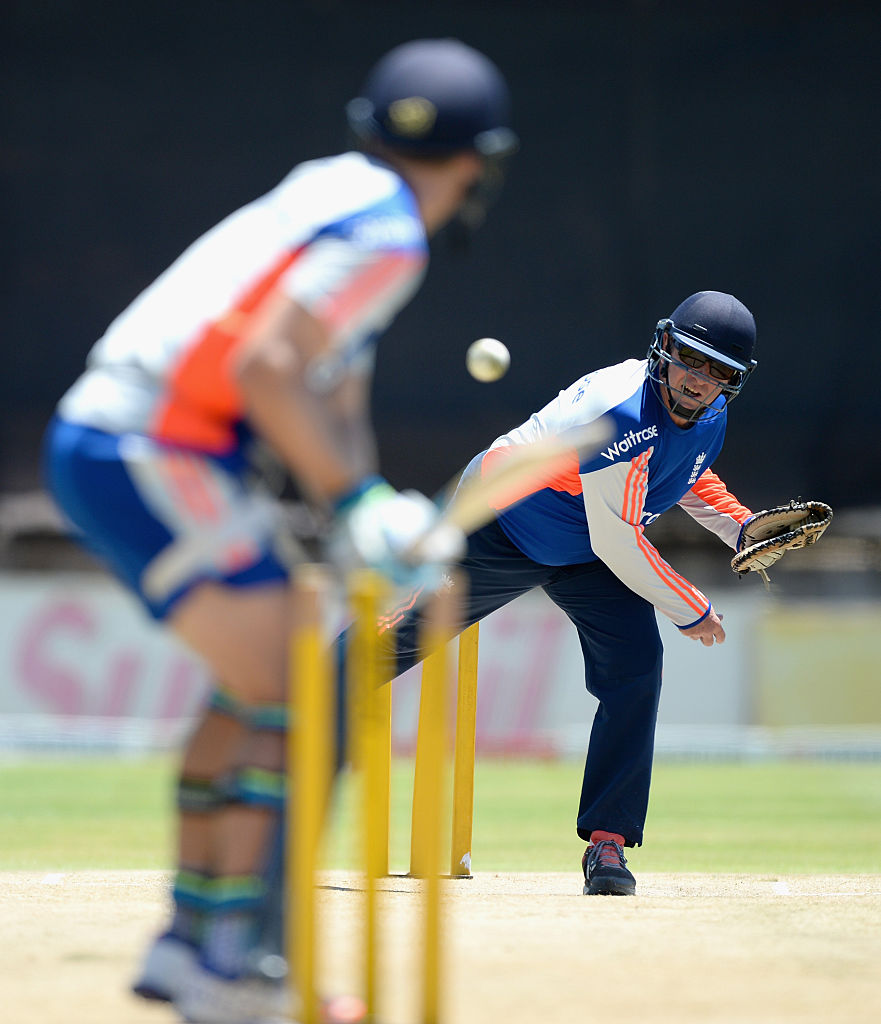 In the world we live in now there’s a lot of information out there which I think a club player can get lost in. But if you focus on going towards the ball with your eyes level, and you’re letting the ball come to you and you’re watching it hard, then you’re not going to be a million miles off.

Even someone like Jos Buttler playing a ramp shot, the basics are still in place: his head is still inside his shoulders, he’s still balanced. The con of elite sport is it looks simple because it looks effortless, and that’s normally because that player is balanced and moving correctly. There’s a great line, from ballet I think: ‘Brilliance is when you can’t see the effort behind the movement.’ With amateur players there can be a temptation to always want to look for something funky and new, and actually the key is to do the basics better.

There’s no quick fix to improve your game. To get better it’s important to hit a lot of balls so it’s necessary for the player and the coach to have fun doing that.

The ability to have fun and hit the ball is part of what you play the game for, and hitting the ball hard is a fundamental to becoming a good player these days.

Whether you’re batting, bowling or fielding, the first fundamental is balance

There are two different ways of practising: there’s practising to expand your game and there’s practising to apply your game. If I’m netting and the focus of that session is on not getting out and playing like I would in a match, that is about application. Then in another session I can free up a bit and see if I can move my game forward.

I’d hate people to think they can’t go out and look at different things, you just have to be focused in how you practise them.

Hitting the ball back to where it came from, from straightforward throws, is a really nice way of starting off any net. It is probably one of the hardest things to do and it shows everything about your balance and alignment. It gets you to repair your basics and then from there you can expand your game. Most things ‘straight’ in sport are difficult. Hitting the ball down the middle of a fairway, for instance: a simple concept but tricky to do.

A challenge you can face in a club net is the quality of bowling, as it might vary a bit. Try and arrive five minutes early if you can and get a few taps before the net session begins.

Peter Moores is one of a host of elite mentors being utilised by new app Proatar, giving coaching advice to players of all levels across the world. Fifty WCM readers can get early access to the app using code WISDEN-PROATAR when registering