Next in our series eulogising titans of club cricket, Scott Oliver meets a record-breaking all-rounder from Lancashire who was forced to reinvent himself in the face of serious illness.

Such is David Makinson’s legendary status in Northern League circles, he has been given special dispensation to field in gloves. Not for the cold, though. He has a rare condition called Dupuytren’s contracture, affecting the tendons in his hands and making it impossible to straighten his fingers. Not ideal for a spinner. And it hasn’t been his only ailment. 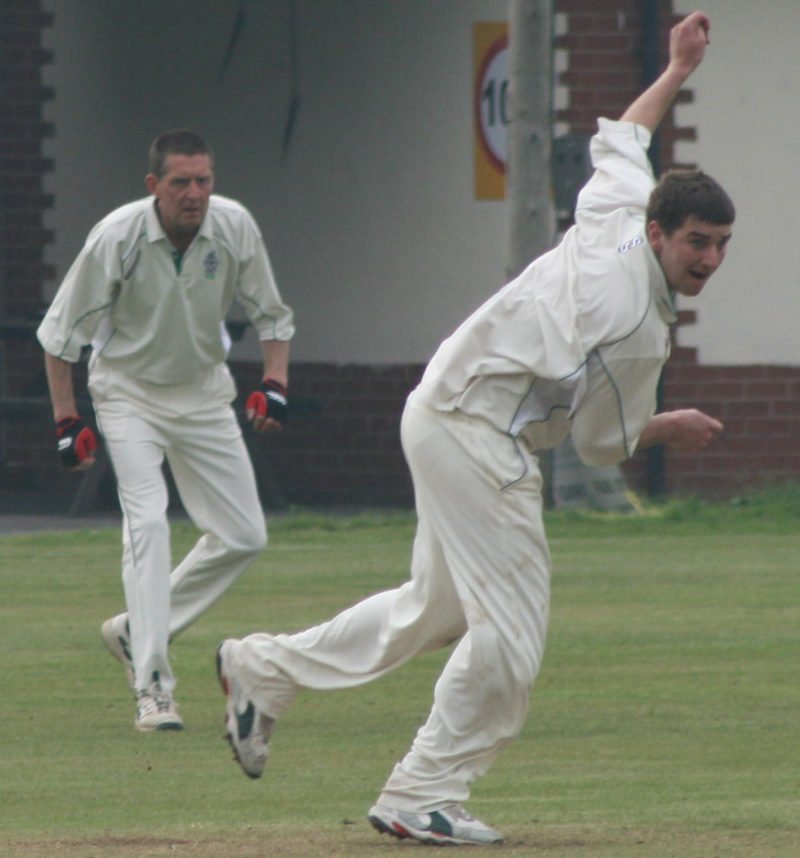 His four-year stint on the Lancashire CCC staff ended after an operation to have two vertebrae fused (laminectomy); his long stint as a pro at Leyland Motors was ended by having a tumour removed from his brain (Cushing’s disease); and he missed the whole of last season after shoulder surgery. All of which makes one marvel at how eager the 58-year-old – the Northern League’s all-time leading wicket-taker with 1,352 – is to resume his post as Leyland skipper this summer.

Makinson grew up across the road from Ecclestone CC, before making the four-mile trip to Leyland at 17, where he would spend the rest of his career at one or t’other of its clubs. Early success at Leyland, culminating in the 1981 title, saw him become pro at Motors, where he worked as a draughtsman. He made the three quarter-mile return trip when the traditionally more successful Leyland made him their paid man in 1984 – the year the left-arm seamer and useful lower-order batsman was picked up by Lancashire on a two-year deal.

“They signed me because Warwickshire asked for permission to talk to me,” he says. “Even though it meant less money than pro-ing plus my job, I said yes straight away. It was always my dream.”

"[I was] sacked, effectively. They said I wasn’t fit enough. I was fit enough to bowl seamers as Cumberland pro for the next eight years...”

A regular in Lancashire’s Sunday League side, then increasingly in the Championship team, he mixed it with the superstars of the era, even surviving a hat-trick ball from future Leyland pro Malcolm Marshall, before hooking the next delivery for four. Macko looked at Mako, then down at the Liverpool featherbed, and said, “Wait till I get you on a quick wicket”. He did, the very next day in the Sunday League. “I got a scruffy leg-bye and watched from the other end,” says Makinson.

In early 1988, the back injury that first flared while he was an overseas pro for Maroochydore in Queensland and saw him miss the entire English season resurfaced during a pre-season game in Jamaica. Physio Dave Roberts advised rest, but after a season out injured, management wanted him to bowl.

“At the end of that season I got retired from professional cricket,” he recalls. “Sacked, effectively. They said I hadn’t recovered and wasn’t fit enough. I was fit enough to bowl seamers as Cumberland pro for the next eight years…”

Makinson is the only player in the league’s history to have done the double of 1,000 wickets and 10,000 runs

Minor Counties cricket was combined with nine years as a pro at Motors until, in 1997, he started to gain weight, lose muscle mass and feel weak. “Driving back from Stockport Grammar, where I’ve worked since leaving Lancs, I almost fell asleep at the wheel. They found a tumour in my pituitary gland and I had to have it cut out. This was when I switched from seam to… well, I won’t call it ‘spin’. It’s slow bowling. But my legs couldn’t carry me to the wicket.”

It hasn’t dented his prolific output. Makinson reckons he’s taken “virtually the same amount of wickets with both styles” and is the only player in the league’s history to have done the double of 1,000 wickets and 10,000 runs. The runs have dropped off since 2007, when he switched back to Leyland after Motors lost their ground and went under. “Leyland had a good ground, good committee men and no real team. We had good players but no ground. It worked out well.”

Related Story: Glen Chapple: ‘I was disappointed not to play Test cricket but I’m over it’

Indeed it did. In 2010, Makinson lifted a first title for 29 years, followed by two more with a largely homegrown side that included Luis Reece, who has since gone on to play for Lancashire and Derbyshire. The secret to his undimmed enthusiasm for the game, he says, is “being captain all these years, fielding where the ball shouldn’t go and whipping the bowler off if the ball starts coming your way too often!”