Scott Oliver profiles Ron Cross – a hero of the Hampshire club cricket scene, in the most literal sense of the word.

In some quarters of the English cricketing firmament, the phrase “we shall fight on the beaches” perhaps conjures images of Duncan Fletcher’s teams – the techniques of ‘forward press’ and lap sweep drilled into them with military precision – heading off to play on the under-prepared, loose- topped and, well, sandy pitches of Sri Lanka to face a bombardment from Muralitharan and friends.

For Ron Cross – stalwart umpire of the Hampshire cricketing circuit, life member of Gosport Borough CC – it is more likely to conjure images of being under bombardment from the Wehrmacht as part of those first battalions landing on the beaches of Normandy on June 6, 1944 during the Allied invasion of occupied France. Nothing metaphorical there.

Cross served in the Royal Engineers’ 79th Armoured Division – specially created to form the advance-guard, carrying out demolitions clearing the way for Allied tanks in those first few critical hours and days – which landed at Juno Beach with the Canadian Regina Rifles two days before his 24th birthday, opening up a channel through the German front line by 9am. Expected to lose 75 percent of its men, there was not a single casualty in 79th Division, which stayed together until the end of the war. All of which puts those tricky decisions about thinly-gloved leg-side catches in perspective. “I still remember it very clearly but definitely wouldn’t want to do it all again,” he says.

Cross had been an apprentice joiner before the war, and a keen cricketer, and after being discharged in 1946 he worked in the Occupational Therapy department at the Royal Naval Hospital at Haslar for 37 years, his work in transforming it later earning him an MBE. He also chaired the local Stroke Association for a number of years.

He returned to cricket, too, an opening batsman and off-spinner for Gosport CC until 1960, when he had to be carried from the field with a back injury. Gosport Borough was formed in 1966 – a merger of Gosport and Gosport Amateurs – and Cross has been deeply entwined in the club’s life, coaching junior sides right up until he was 80, as well as being fixtures secretary for many years, all done by post since he was without a home telephone.

It is perhaps his 35 years as an umpire (and trainer of umpires on the South Coast Panel) for which he is best known, though, officiating in the early days of the Southern League, in Inter-Services matches, in the 1983 National Knockout final at Lord’s, and in regular Hampshire Second XI fixtures, featuring the likes of Robin Smith and Nasser Hussain. He says the most famous cricketers he has umpired are “Gordon Greenidge and Peter O’Toole, who was playing for Lord’s Taverners and was a real cricket fanatic”. 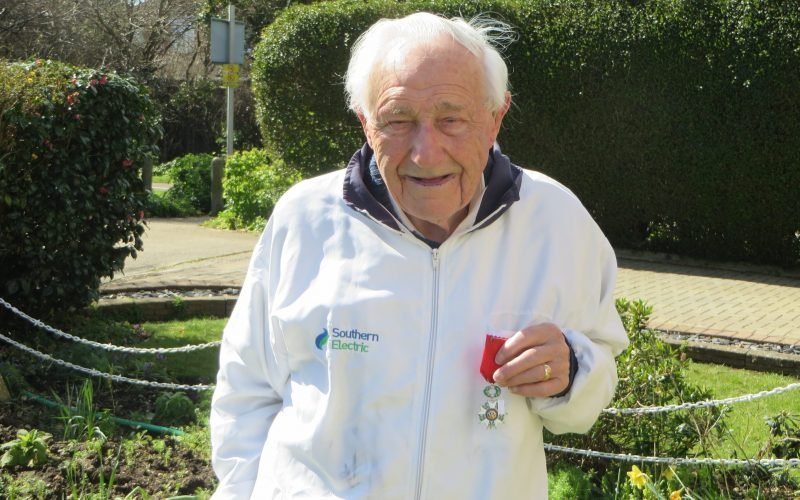 Ron’s eyesight started to deteriorate in 2009. By 2012, he was registered blind. Undeterred, he undertook a Blind Veterans UK IT course, and with a special screen to magnify text and software to read back his messages, he has been able to stay in touch with family via email.

Ron only made one hundred as a player, he says, but on June 8 he brought up a far more impressive century, receiving a sackful of cards from well-wishers and, of course, a telegram from the Queen. The second ton was marked by a socially-distanced garden party with four generations of his family, although the pandemic has delayed a celebratory event at Gosport Borough’s Privett Park, at which he planted a row of now mature trees under the benign shade of which sits the Ron Cross commemorative bench, ready for him to occupy it once more as something akin to normality returns.

Cliché it may be, but it has been one hell of an innings – one of small kindnesses, large honours (in 2016, France conferred him with its highest military award, the Légion d’honneur, for his part in their liberation) and many unfathomable experiences. And, of course, a little bit of cricket.