As a part of our series celebrating titans of the club game, Scott Oliver profiled Peter Wood, a record-breaking run-machine from the Lancashire League.

For Peter Wood, Rawtenstall’s all-time leading run-maker, 1991 was a bittersweet year. He turned 40 after a season in which he made 16 40-plus scores in 25 knocks, finishing with what remains the Lancashire League’s amateur record of 1,227 runs, eclipsing the previous best of 1,130. His father had passed away the year before, however. “Instead of going abroad during the season and missing the usual few games, that season I drove up from Torquay at the weekend,” says Wood. “I was determined to get the record for my dad.”

Ten years earlier, Wood had made a pair of unexpected Sunday League appearances for Nottinghamshire. “Clive Rice had been pro at Ramsbottom [in 1973] and he always said, ‘Why the hell haven’t you played county cricket?’”

The first game was at Edgbaston, and Wood was told he was batting No.3. “Richard Hadlee was in the dressing room smoking a cigar and said, ‘Do you want me to come and bowl some at you?’ So I spent lunch with him firing them past me. Then Gladstone Small turned up and did the same.” Wood sat through a 188-run opening stand before being nicked off for 3 by Bob Willis, fresh from his Headingley miracle.

He played once more for Notts, run out by Tim Robinson, “then I told Clive, ‘I’m too old for this’ and went back to work”. That meant IT at the time, although he later took on four McDonald’s franchises. “If I have any regrets, it’s not having more belief in myself to play professional cricket.”

In his late-teens, Wood spent two years in Durban during apartheid, his father emigrating to run a textiles factory. In 1969 he was named Natal’s ‘Most Promising Young Cricketer’, which meant two days netting with the South Africa team – Mike Procter, Graeme Pollock, Barry Richards et al – before the Kingsmead Test against the Australians, the Springboks’ final pre-isolation series.

By 1971 he had resumed a 513-game Lancashire League career that netted 14,951 runs at 33.97, the second-best average (by just 0.06) of any local player to have broken the five-figure barrier. His aggregate – fourth on the all-time list – would be considerably higher but for a year as pro at each of Walshaw, Norden and Blackburn Northern. 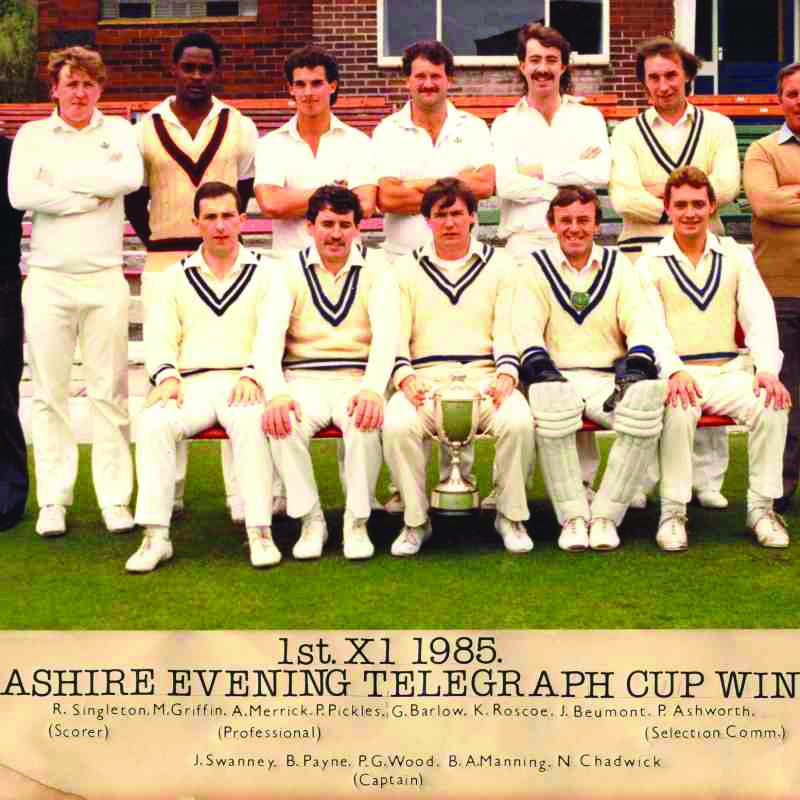 There have been several other highlights: winning the league and cup double in 1976 with the second-choice pro and Indian Test all-rounder, Abid Ali; playing against the touring Indians in 1986; opening the batting with Michael Bevan, “the best batsman I’ve played with”; and winning the title as skipper in 1981, when Franklyn Stephenson was their pro and rival clubs had Michael Holding, Andy Roberts and Kapil Dev in their attack.

“I used to enjoy the thrill of facing fast bowling,” he says. “You were a bit nervous going out to bat, thinking how quick some of these guys were, but also excited by the opportunity.” A week in intensive care following a brain aneurysm, aged just 47, puts these things in perspective.

In 1996, aged 44, in his final season before hitting the golf course, Wood scored 40 out of 90 all out against peak Allan Donald. “He was very quick, but he wasn’t the quickest. That was Patrick Patterson, in 1989. Not the best, but definitely the quickest. The worst part was seeing how far back the keeper was, and then the first ball going over his head for four byes!”

Still, Wood made an unbeaten 84 as Rawtenstall knocked off 178.