Earlier this year, Scott Oliver met Neil O’Brien, a talismanic all-rounder who dominated the club scene after his dreams of representing his beloved Lancashire were dashed.

“Brian Statham, Ken Shuttleworth, Ken Higgs, Ken Grieves: a lot of the Lancashire players used to stop off at my dad’s pub, the Dog & Partridge in High Lane, on the way back from Derby,” recalls Neil O’Brien, who once pined to wear that red rose himself. “Dad was on the Benefit Committee at Old Trafford and Ken Grieves asked him why I’d given up cricket. I’d have been 20 or 21 and only ever wanted to play for Lancashire.”

A string of good performances for Lancashire Colts saw the county’s coach, Tom Reddick, tell O’Brien in 1965 that he was in line to join the staff the following summer. However, that winter Reddick remained in South Africa and the new coach had other plans, which didn’t include ‘Nobby’. He found out after reporting to Old Trafford for second XI pre-season. “They told me: ‘You can stay today for practice, but that’s it’.”

Grieves coaxed O’Brien out of a two-year cricketing hiatus largely spent playing golf and took him to Stockport in the Central Lancashire League. In 1970, with Vinoo Mankad’s son in the side, they went to Lord’s for the final of the National Club Championship in its second season. Cheltenham needed four off the last over, which began with five dots, but the final ball sailed over O’Brien’s head and into the Tavern for six.

In 1972, he became the pro at Crewe of the North Staffordshire & South Cheshire League; a six-year stint that brought one league title and some very tough cricket. “I broke Garry Sobers’ record for the most runs, and all for £12 a match. In the second year it went down to £10 because the club was hard up.”

In 1978, O’Brien headed back to the Manchester fringes with Cheadle Hulme – winning five Cheshire County League titles in his first seven seasons – where he remained until retiring in 1992, aged 47.

Throughout all this, he was a fixture of the Cheshire team, scoring 7,795 Championship runs, with a best of 148 not out against Lancashire second XI, and skippering them from 1987 to 1990, the end of a hugely successful decade.

They won the inaugural MCCA Knockout Cup in 1983, repeating the feat in 1987, O’Brien taking 3-37 and 4-32 in those finals. They also topped the Western Division three times, going on to lose the Championship final to Durham in 1984, before beating Suffolk in 1985 and pipping Cambridgeshire at Worcester in 1988, giving O’Brien both available trophies inside two years of captaincy.

He also led his side to a famous NatWest Trophy win over Northants in 1988 – nine down and with a ball to spare – the skipper chiselling out a vital 28 in a low-scoring game after an earlier spell of 12-3-21-1. 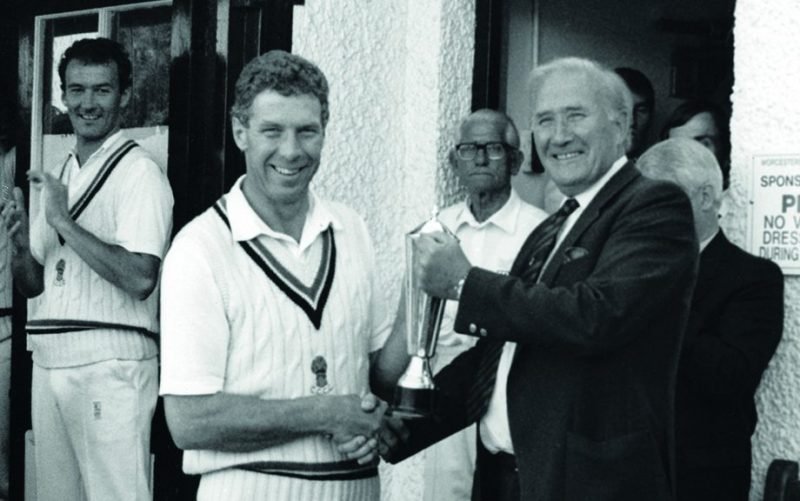 Neil O’Brien with the Minor County Championship trophy in 1988

There were several outings for the Minor Counties XI side, too, including famous wins over New Zealand, in 1978, and India, leading into the 1983 World Cup. And there were 25 games in the B&H Cup, with Gooch and Boycott among O’Brien’s scalps. In 1981, he became the first Minor Counties player to pick up two B&H Gold Awards when he scored 51 out of 98 all out against Sylvester Clarke’s Surrey at The Oval.

Three years earlier, on a sticky dog in Chesham, Bucks – the venue having changed from Amersham which was even stickier – O’Brien almost orchestrated the Minors’ first ever win in the competition, top-scoring with 31 of 110 all out in a game which featured 35 maidens. His spell of 11-6-15-4 then saw Leicestershire subside to 93-8 before crawling over the line thanks to one of those Dog & Partridge habitués, Ken Higgs.

A hugely popular and widely admired all-round cricketer among teammates and opponents alike, O’Brien brought plenty of grit and wit to his cricket, “a game that almost broke my heart”.