Has the grassroots game struck the right tone and is the Spirit of Cricket still relevant to club cricketers? Writing for Wisden Cricket Monthly, Rich Evans investigates

Poor player behaviour – and its impact on the participation levels of both players and officials – has been in the spotlight in recent seasons, leading to the introduction of Law 42 by the MCC ahead of the 2018 campaign, empowering umpires to apply run penalties and banish extreme offenders from the field.

We know we can’t overstep the mark, but is there a consensus as to where that line is? Furthermore, is the Spirit of Cricket an archaic concept or an aspect of the game we’re morally bound to preserve?

“The Spirit of Cricket is essential to the game,” opines Peter Frost, director of cricket at Harpenden CC. “It’s something all clubs should value highly. Parents encourage their children to play cricket due to the standards they set while playing. It needs to be continually prioritised and explained to players.”

With succession planning a constant worry for many league and club committees, it’s regrettable that energy must be expended on policing spats. “The Hertfordshire league have worked tirelessly over the last few years to reduce verbals and dissent towards umpires,” adds Frost. “The league has a very difficult job maintaining those standards; it’s taking more of their time, which shows standards are deteriorating.”

If teams were incentivised to make the right on-field calls – such as via a ‘fairness’ league table, based on the marks awarded by opposing captains – would that help to address poor umpiring and abject player behaviour? #ClubCrickethttps://t.co/pITZkiRCp9

We’d like to believe that most club cricketers would prefer to spend their Saturday in an amiable environment, so why is animosity between sides so commonplace? A Lancashire Knockout Cup game was abandoned in May after a batsman allegedly head-butted the bowler after he was dismissed. In New Zealand, a playing-umpire reportedly suffered a broken nose after being kicked in the head by an opposing player. A match in the North Wales Cricket League was halted in 2018 after two players fought when the batsman refused to walk. In another incident last year, a club cricketer head-butted the standing umpire, dislodging one of his teeth, before being slapped with a 17-match suspension, with the same league structure reporting that a bat had been thrown at an official in a different match.

Of course, these are extreme cases of on-field violence, but what about the habitual ‘mental disintegration’? Is that an acceptable component of the game? “There’s no clear line,” says James Tomson, performance analyst at Tamworth CC and Warwickshire, and second-teamer for the former. “What’s encouragement and what’s sledging? As soon as it becomes personal that’s unacceptable. I believe recording how many times a batsman has played and missed is OK, but some don’t. It’s very subjective and needs clarifying.” 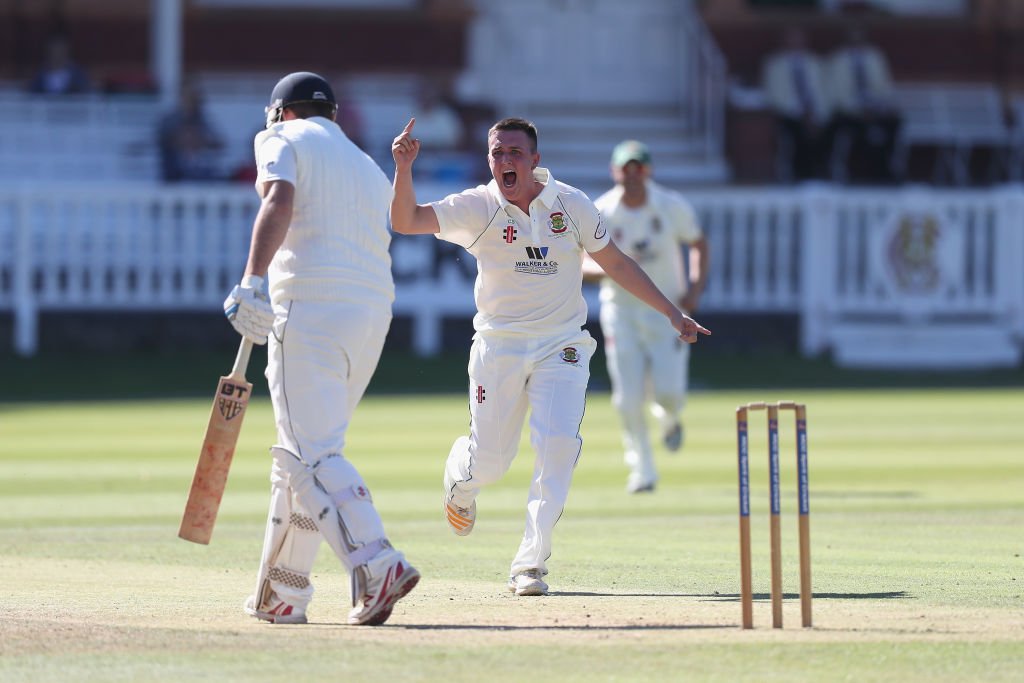 Send-offs are just one way to antagonise opponents

Recently, a teammate of mine angered an opposing batsman – and many of his own team – with a bombardment of chirps, which led to a minor confrontation. His comments didn’t get personal, but I stood at slip pondering whether such behaviour is damaging to the game at large.

So, where does this conflict stem from? Is it the intensity of league cricket? Or is the game suffering the ill-effects of our midweek stresses? While many friendly cricket teams used to ‘drink back the fixture’ after a mismatch on the field, post-match sociability between sides is also on the wane. Whatever the reason, there is a general sense that things are getting worse.

“The declining Spirit of Cricket is representative of a bigger thing: how you want to be treated as a person and how you should treat other people,” says Michael Brown, president of Burnley CC. “The etiquette in first-team cricket is definitely worse – the manners, the language – but it’s just a reflection of society. I don’t object to somebody waiting for an umpire’s decision – especially at a lower standard when you’re likely to get bad decisions on another week. But you’ve got to take the rough with the smooth. Your attitude and behaviour in those circumstances needs to be appropriate; no send-offs, showing dissent to umpires, sledging that borders on abuse.”

“Numbers – or lack thereof – is of course the primary selection hurdle, but to what extent can you reward commitment over talent?”@Rich_Wisden wades into the subject of the weekly selection merry-go-round. https://t.co/RBSF8ly6Bz

We can’t really blame antagonism at recreational level on the visible unpleasantries of the professional game – while sledging is of course a feature of the international arena we aren’t privy to much of it, and in general the relationship between players and officials is harmonious, especially so since the introduction of DRS – but Brown argues cricket is feeling the impact of other televised sports, most notably football.

“Poor attitudes stem from watching TV,” he says. “The footballing mentality permeates through many sports now. I am not a fan of what football stands for – constant diving, a desire to cheat. Rugby is the flagship for how people should play sport. I’m sure some things in the scrum tread the line, but when the referee speaks, they listen, and there’s a genuine respect between players.

“Judgment comes in determining what’s disappointment and what’s dissent. People react because you’re in a competitive league environment in the heat of the moment. But to eff and blind, kick the turf and escalate dissent is not on – you have a duty to the game to behave.”

Tony Horn, chairman of the Wiltshire Association of Cricket Officials, offers an umpire’s perspective, outlining the importance of experienced officials. “League cricket has made people aggressive – it’s easier to get emotional – but if you’re a competent umpire and the players recognise that – they know you, you know them, they know what they can and can’t get away with it – it’s usually OK. The worst behaved players are the ex-pros or those on the fringes of the county set-up, because they’re used to playing at an intense level. It spills over. From a personal point of view, ill-discipline was worse five years ago than it is now, but I’m a more experienced umpire now. I know where the potential flashpoints are.”

To walk or not to walk?

Many deem a batsman walking after feathering the ball behind as the epitome of the Spirit of Cricket, and refusing to do so leads to regular remonstrations, even though walking is not enshrined in the laws of the game. Opinions are divided, but could we tame tempers by codifying the correct response? Nick Campion, writing recently for WCM, suggested the MCC should outlaw walking, arguing it should be considered as “undermining the umpire’s authority and against the Spirit of Cricket”. He believes that “90 per cent of bad blood in club matches would be eliminated”. It’s an outlandish proposal, but not without logic.

“If we banned walking, 90 per cent of bad blood in #clubcricket would be eliminated” … Do you agree?

What’s your big idea? How would you improve club cricket? Email us at editorial@wisden.com. https://t.co/H8q2BWKcx1

“Many players will stand there until given out – innocent until proven guilty,” says Tomson. “In first-team cricket, for sure. Generally, the spirit is good in our second-team’s league, but people still don’t walk. You get enough bad decisions. I’ve got reasons for and against walking, but I’m a batter, so I’ll generally stand there.

“When you umpire yourselves, you lose that degree of authority. If your mate’s umpiring, walk – don’t put him in a difficult position. If it’s a paid umpire, stand your ground.”

Horn adds: “I’m of an age where I was brought up to walk, but I’m now inclined to let the umpire make the decision. I umpired a game between South West under 15s and Wales under 17s last season; an ECB coach of the under 15 side had a clipboard and the last point read ‘do not walk’.”

WCM understands discussions between key club cricket personnel have been taking place to establish a national standard for auditing and improving player discipline, with many county boards backing the initial proposals that would prevent banned players migrating to another league before their suspension has been served. Illegal bowling actions is another issue aligned with this thinking.

Cricket is all too aware of the difficulties in establishing a one-size-fits-all rulebook, but while leniency towards wides understandably differs from one level to the next, rules on player behaviour must surely be universal – though, as Horn concedes, “We should have neutral umpires at all levels of grassroots cricket, but it’s a big ask”. In Hertfordshire, for example, Law 42 can only be exercised by a non-playing umpire, meaning the bottommost leagues fall outside its jurisdiction. Guidelines exist on what constitutes each of the four levels of sanction, but we’re some way off widespread usage and understanding.

While substandard umpiring will always ruffle feathers, perhaps it’s time the players themselves raised a finger to underhand tactics and insulting language, to help foster an environment worthy of a precious day of leisure. Otherwise, we’re in danger of becoming our own worst enemy.

What factors should govern team selection?

“I dream of having a need for a selection process. Unfortunately, like many teams at the lower end of the food chain, getting enough bodies to fill available places is the start and end of it. Add in personalities and it becomes a minefield. Remind me why we do this again?” Warnham CC – via Twitter

“I’ve played with plenty of players who are too good for the team they were in, and didn’t want to test themselves at a higher level. It often meant players like myself – while not on their level – were spending 45 overs in the field, batting No.11 (that part was deserved!)” Andrew Watson – via Twitter

“He has to play because he cuts the outfield”
“His wife makes cracking sandwiches and is the best baker in the club”
“He can’t drive when it gets dark, so has to play at home”
“He sponsors the Player of the Year award” Steve Dolman – via Twitter

“I once played in a match where an opposing player had to bat high up the order, despite being a bowler, as he was tagged and on a curfew!” Hector Cappelletti – via Twitter