Could action indoor cricket be an ideal vehicle for inspiring future generations? Rich Evans investigates a largely forgotten form of the game that’s thriving in the Midlands.

The make-up of action indoor cricket – high intensity, inclusive, exciting finishes – is seemingly a nice fit for club cricketer 2.0 and the ECB’s Inspiring Generations programme. But while it’s blossoming in the Midlands, the number of venues is at an all-time low. So why has the game faded in recent times when it’s flourished overseas? And could this be the time for a renaissance?

There are two primary indoor cricket formats: action indoor cricket – the eight-a-side, soft-ball edition endorsed by the ECB, which uses a tension net – and the hard ball six-a-side sports hall version, which is more commonplace in the UK. Action, however, is the only format that has a formalised code of rules adopted globally and an international pathway from under 12s to over 50s for both males and females.

Think you know your stuff? Prove it here and some prizes could be coming your way…https://t.co/6AyNevcEoF

Indoor cricket boomed in the UK in the late eighties and early nineties, but rising rent, bills and council tax, along with a lack of player availability during the summer, made it unsustainable. Around 30 action indoor cricket centres existed then – the likes of Mike Gatting, Kim Barnett and Gladstone Small would play during the winter months before their contracts prevented them – but now only five remain, in Derby, Nottingham, Leicester and Birmingham, and a one-court facility in Mansfield.

Three or four have fallen in the last five years – around 3,000 London-based action indoor cricketers were left without a facility after its centre was replaced by housing – but there’s still interest in the format, with players from Essex, Manchester, Cheshire, Northants and Kent due to compete in an upcoming junior tournament.

Founded in Perth in the late seventies, action indoor cricket has blossomed in the Southern Hemisphere. The Action Indoor Cricket England (AICE) Facebook page has around 600 followers, while its Australian counterpart has 29,000. “It’s a huge part of their cricketing world and player pathway,” says Anish Patel, the vice chairman of AICE, who first played the game in Australia in 2009. “Both New Zealand Cricket and Cricket Australia truly embrace the game, juniors grow up playing both, many pros have played indoor cricket and its on the coaching syllabus. There’s a big disparity; they have over 100 centres in Australia, we have five.” While British participation is limited by comparison, the five remaining centres in the UK are performing healthily, with numbers “on the up” after the gradual decline.

The international pathway is a major selling point. AICE annually field teams in global events: there was a Junior World Series in Christchurch in 2018 and a Masters World Series in Cape Town in 2019, while the men’s, women’s and under 21s event will take place in 2020. England, captained by Patel, will take on Sri Lanka in an international series in January – a rarity in an amateur sport where players must pay their own way. And an exciting new Super League, which will be livestreamed with commentary, is also on the horizon.

The high-energy game played in purpose-built centres comprises 16 six-ball overs, four four-over batting partnerships per innings and five-run penalties for dismissals. The playing area is enclosed in tightly tensioned netting, including a four-metre high ‘ceiling’, which makes the game faster.

You must run to score – you can’t just hit a net to claim points – and you need to score every three balls, otherwise you receive a five-run penalty. The laws allow for mini battles; for example, if the opening pair in the first innings score 19, the openers in the second innings will get a point if they score 20. Only a bat and a pair of gloves are necessary for batting, and the specially adapted soft impact leather ball is suitable for newbies.

“You suspect that no-one who played with him – much less those who had the dubious pleasure of facing him – will forget the year Allan Donald roared into bowl in the shadow of the east Lancashire moorlands.”

“There are many more pressure moments compared to outdoor cricket,” says Patel, who has worked in the Birmingham centre since 2015. “How often in outdoor cricket do you see a team needing two or three to win off the last ball? It rarely happens. The World Cup final was a once-in-a-lifetime game. In indoor, you get those moments all the time. You’re not reliant on the weather and it’s fast-paced, with games lasting one hour and 15 minutes – perfect for those who struggle to play on a weekend. It’s great for fielding, great for fitness and just as demanding as a 50-over match.”

While AICE are bidding to grow the game at all levels, enlarging their junior pool is a primary goal. In 2018, England under 13s beat hosts New Zealand in the Junior World Series. Derby now has junior leagues at under 10 (six teams), 12 (11 teams), 14 (15 teams) and 16 level (eight teams including a girls’ team), with Nottingham running leagues for under 11, 13 and 16s. Leicester is reviving its junior league, while Birmingham will soon launch their inaugural junior competition.

“The format is ideal for juniors because everybody must bowl two overs, including the wicketkeeper, and everybody bats,” adds Patel. “You can’t just have a strong batsman batting with a weak one, blocking five balls then stealing a single, like the other indoor format.” Some believe that playing indoor cricket can allow technical bugs to creep into your outdoor game, but Patel disputes that. “In sports hall cricket, you’re looking to angle the bat, work it into corners and sneak quick singles, but in action we develop strong outdoor shots that you just play later. It’s the same full face of the bat, but you play it under your eyes, like Kane Williamson. It’s all transferable. It’s not bad for your outdoor game, it’s just another top-up.

“The kids learn to play under pressure. We’ve got lots of our junior players playing county outdoor cricket and they’re ahead of their peers because they’ve developed a strong mentality, play more regularly and experience high-pressure moments. Warwickshire, Staffordshire and Derbyshire county cricket boards are on-board with action because they’ve seen their age-group players benefit. The stronger players are playing indoor cricket, so they’re understanding in-game situations so much more.” 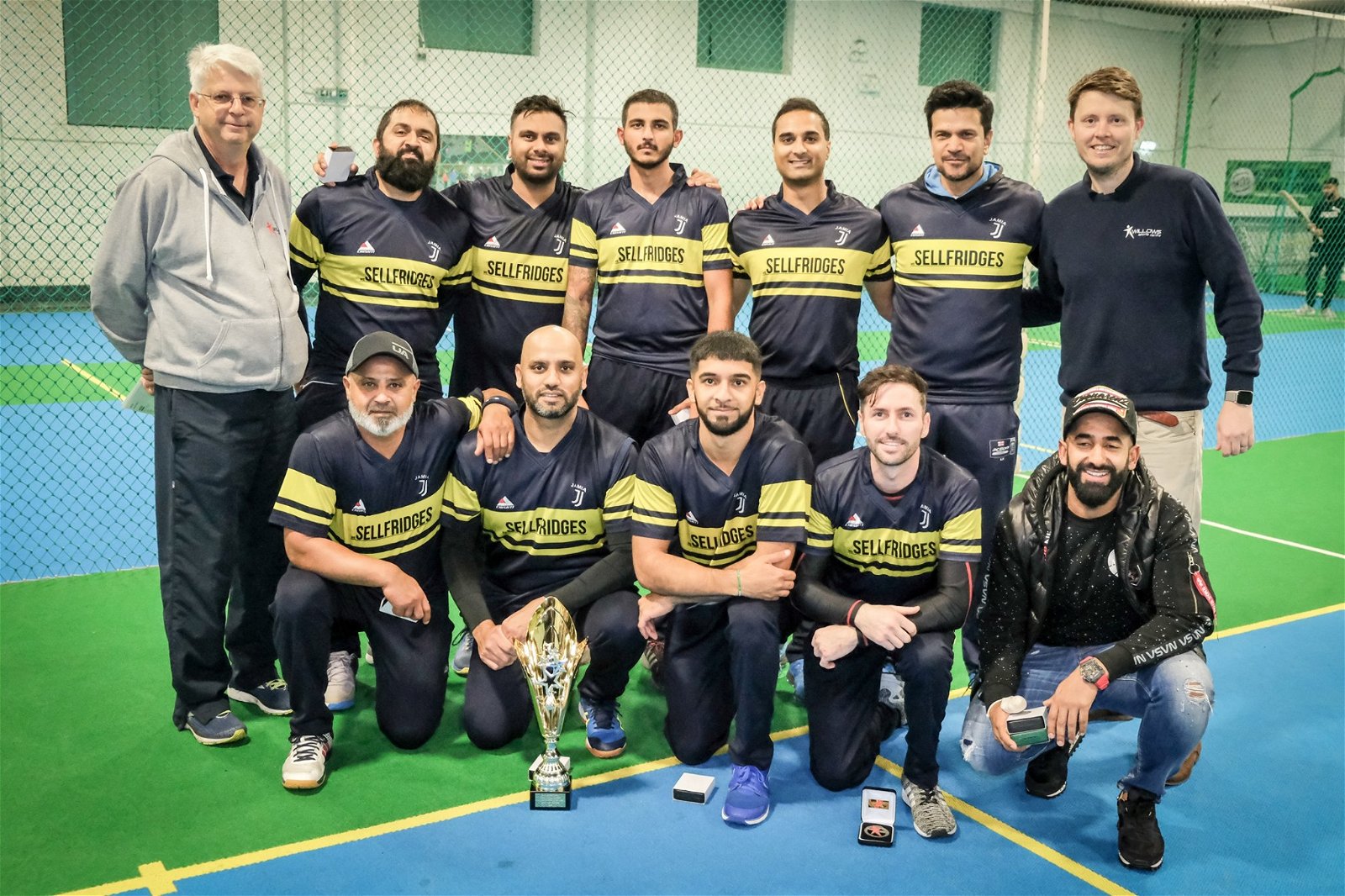 “There is real potential to grow the game through indoor cricket”

Kieran Cooke, a junior team coach, selector and tournament organiser, offers a convincing endorsement. “Action indoor cricket has the potential to be the format which improves participation. Rather than the top-down approach of The Hundred, action actually has the potential to grow participation. Kids love the game, it’s over in 90 minutes and it’s more accessible for people who don’t have time for outdoor cricket. Rules are specifically designed to promote inclusion and activity, such as the third ball rule, batting pairs and every player needing to bowl and field. It doesn’t require full equipment, so it’s more affordable and appealing to non-cricketers.”

“All forms of indoor cricket are fantastic for developing juniors but the tension net version is the pinnacle,” says Pete Staley, a coach for Northern Star Indoor Cricket Club’s under 13s team, three of whom have been invited to train with the action England under 12 pathway side. “It offers greater opportunities to develop skills on smaller playing areas with more fielders. Playing under standardised rules with no local variations also helps. Each facet of the game can be honed but the biggest improvement I have seen in my players is fielding, running between the wickets and rotating the strike.”

Nick Reeves, who captains Harpenden CC’s indoor team, says there is also still value in the sports hall version. “There are no cons from a technical perspective. Many players play indoor cricket with initial scepticism, but manoeuvring the ball indoors develops your ability to rotate the strike outdoors. There is real potential to grow the game through indoor cricket, which can make cricket an all-year-round sport, so it can challenge football and other winter sports that are increasingly eating into the cricketing summer. A fast-paced game, smaller teams and more exciting moments suit modern society’s sporting needs perfectly.”

In this month’s Club Debate @Rich_Wisden finds out what has gone on to lead to the abandonment of The Tees Herts & Essex Cricket League.https://t.co/xfPwMch4li

The ECB’s involvement in action indoor cricket is largely restricted to assistance with safeguarding and coaching qualifications – all the centres are privately owned, which is problematic from a funding perspective – but it appears to tick many boxes for the Inspiring Generations blueprint, appeasing shortened attention spans and a modern society that demands inclusivity and accessibility. Furthermore, there’s an elite pathway and, like All Stars Cricket, the formula has been proven to work in Australia.

The ECB’s 2020-24 strategy forecasts that 88 per cent of us will live in towns and cities by 2030, with urbanised cricket and South Asian participation key components (action’s Birmingham and Leicester bases have a strong Asian representation). Indeed, the ECB opened its first indoor urban cricket centre in Leyton this summer – the first of a planned network.

According to AICE, Cricket Australia are pushing action’s case for ICC endorsement and inclusion in the Olympics, but for the UK game it’s about growing awareness. There are challenges ahead and more passionate entrepreneurs required, but with a product aligned to the demands of youngsters, this could be the perfect time for an indoor cricket resurgence.