The story of Great Habton CC offers a beacon of light to small village teams nationwide, suggesting that finding a point of difference can allow them to compete with large cricket factories. Rich Evans investigates.

Having all but folded in 2001 due to poor player availability after over a century in the Scarborough Beckett League, Great Habton CC were reformed 11 years ago by 17-year-old John Lumley. It started as a family project; the teenager was aided by his mum, dad and uncle, with only the essential equipment and a few grand in the pocket. Between the death and rebirth of the Saturday team, one evening side limped on, but eight regulars has now swelled to 50 members and five teams across several leagues, with 2019 set to see a Saturday second XI introduced for the first time.

The club has achieved five Saturday promotions and triumphed in various night leagues and weekend cups, but the real victory lies not only in their continued existence, but a team culture centred around fun. Unlike many clubs they know exactly who they are and what they represent: “Recreational cricket in its truest sense”. 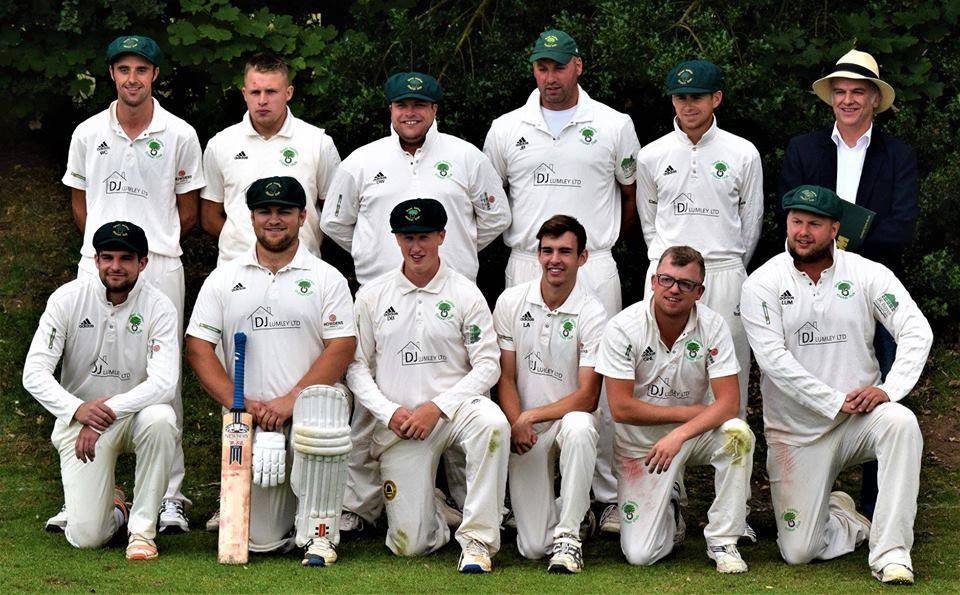 On-field success of course contributes to enjoyment – the spine tingles when you’re involved in a dramatic victory – but should a club be directed by fun or professionalism? Most clubs strive for a balance, but that can often be hard to find. Lessons can be learned from Great Habton’s approach, the success of which offers proof that small village clubs are not necessarily sitting ducks.

“We’re bucking the trend in village cricket,” says Jack Stockdale, secretary of Great Habton. “By rights, we should have gone under a long time ago. We’ve created a model of how village clubs can compete in a world increasingly dominated by big-town clubs. The club is a fascinating example of how the old and new ways of village cricket have fused to form a very successful little club with big ambitions.”

Great Habton is a small village in the district of Ryedale in North Yorkshire, and its cricket club does not look like a thriving outfit at first glance. There are two old sheds in the corner of a disused paddock owned by horse owner Tim Easterby. No showers, no kitchen, just a portaloo and an outdoor tap, while tea is sometimes served from a car boot. It’s a far cry from the provisions on offer in the Yorkshire Premier League North and Bradford League, and those provided by neighbouring Pickering CC and Malton & Old Malton CC. As such, they have struggled to raise a junior section and cannot access ECB funding. So how do they keep afloat? 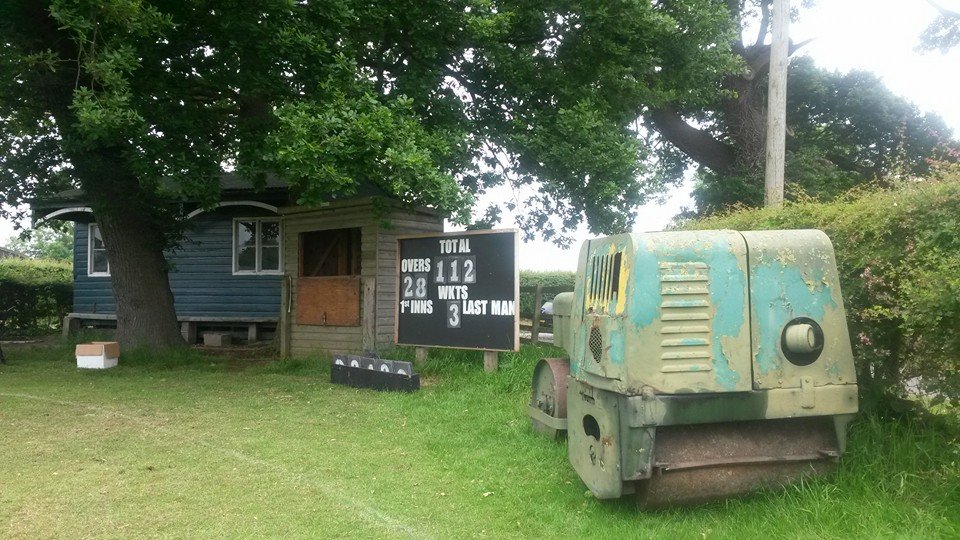 Despite the death of his mother several years ago and his father suffering a stroke shortly after, which saw his son take over his construction business, Lumley has worked tirelessly as captain, treasurer and groundsman to keep his beloved club thriving. He also serves on the Ryedale Beckett League committee. Still only 28, he was first fuelled by boyhood nostalgia of “the glorious Saturdays watching my dad and uncle play at my home ground where I was brought up. I never got that chance and I thought, ‘People deserve this opportunity’. That’s what we need to show people again.” Lumley was awarded the Ralph Pritchard Award for Volunteer of the Year in the 2018 Yorkshire Cricket Board NatWest OSCAs.

He admits that the growth has exceeded his own expectations. A player exodus nearly ended the dream after the first season, but a local newspaper advert yielded three replies – two young lads and a seasoned clubbie willing to travel 200 miles from Oxford! One acquisition in particular, the 16-year-old Jack Stockdale, now 26, proved a real asset, and he has helped Great Habton station themselves as a ‘social side’ powered by beer and giggles.

"We try to win, but the pint’s more important than the win. Having 11 players out on any given day is a good enough medal to have around your neck. Just being there is winning"
“We agreed that we can’t have grand ideas to play Yorkshire Premier League cricket, so we needed to offer something different,” says Lumley. “Ever since ‘Stocky’ joined, we’ve recruited lads who play for enjoyment – not to play the highest standard and strive for professionalism. We backed ourselves as the social side, the underdogs – those who enjoy a beer and a laugh. We’re bucking the trend just by having that ethos.

“You can’t saturate the market with the same product, so we offer something different. If you come to us, you know you’re coming to the pub afterwards. We try to win, but the pint’s more important than the win. Having 11 players out on any given day is a good enough medal to have around your neck. Just being there is winning. These clubs can have their medals but it’s about having people to play in the future.”

Stockdale elaborates on the importance of new recruits subscribing to the ethos: “As this was the first sports club I’d been involved with, I presumed all clubs were like this, and that everybody got along. But the more I saw other clubs, the more I realised it wasn’t like that. We always had this corny recruitment policy: we’d rather have good lads than good players. We had one lad who’s played seven years with us and 20 years in total, and he got his first double-figure score this year! But he’s a cracking lad. He’ll cut the outfield, have a few beers and happily bat No.11 to allow the youngsters to have a go. We actively recruit like that. 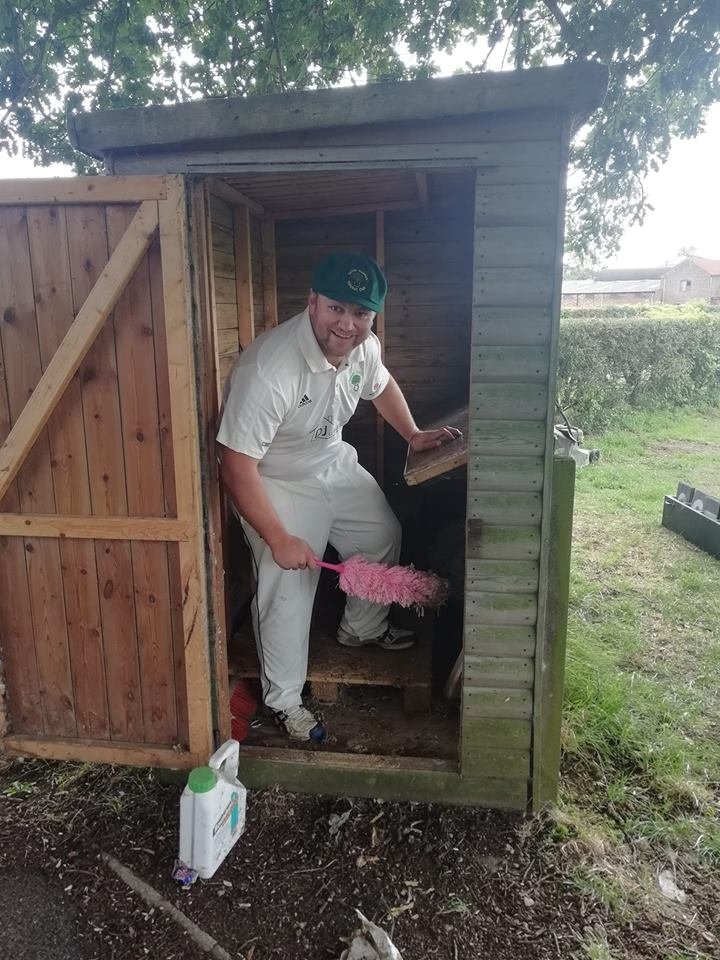 “It’s hugely important for small village clubs to find that niche. When people see us walking around town, they say, ‘Oh it’s the Habton lads’, which sounds trivial but it’s not. Crucially, we’re not cricketers – we’re a group of friends, first and foremost, who happen to play cricket – and there’s a big difference.

An article by Great Habton in The Scarborough News in October read: “If you don’t know us and fancy joining up, know that we’re a bit old-fashioned (in a good way). The old sheds maybe aren’t the best, you might have to help paint the boundary before the game… but you’ll be promised one of the best groups of mates to play cricket with.”

“If we make Habton the same as Malton, the big club next door with four sides, we’d fail,” adds Stockdale. “If your objectives are based on results, stature and league position, why would anybody join a club with a shed to get changed in? We realised we had to offer something different, so what we offered was recreational cricket in its truest sense.”

A junior section has always proved a step too far for Great Habton – though they are “toying with the idea” of introducing an All Stars Cricket centre – but their provision of short-form evening cricket has boosted the recruitment and retention of younger seniors, delivering an accessible entry-point before hopefully converting them into weekend regulars.

Lumley concedes that the village club don’t have the same pulling power as their rivals. “You can’t blame the parents; they aren’t going to send their junior to a club with two timber sheds, a tap and porterloo when they can go down to Malton or Pickering and have a great junior section with a changing facility and bar.” Without a junior section, many grants are simply unavailable to them, but Lumley advocates a need to recognise clubs who retain younger senior players as well as those who introduce juniors. “They don’t bat an eyelid at us,” he says. “Grants are available to your large clubs, but they don’t consider the little clubs with a couple of sheds. 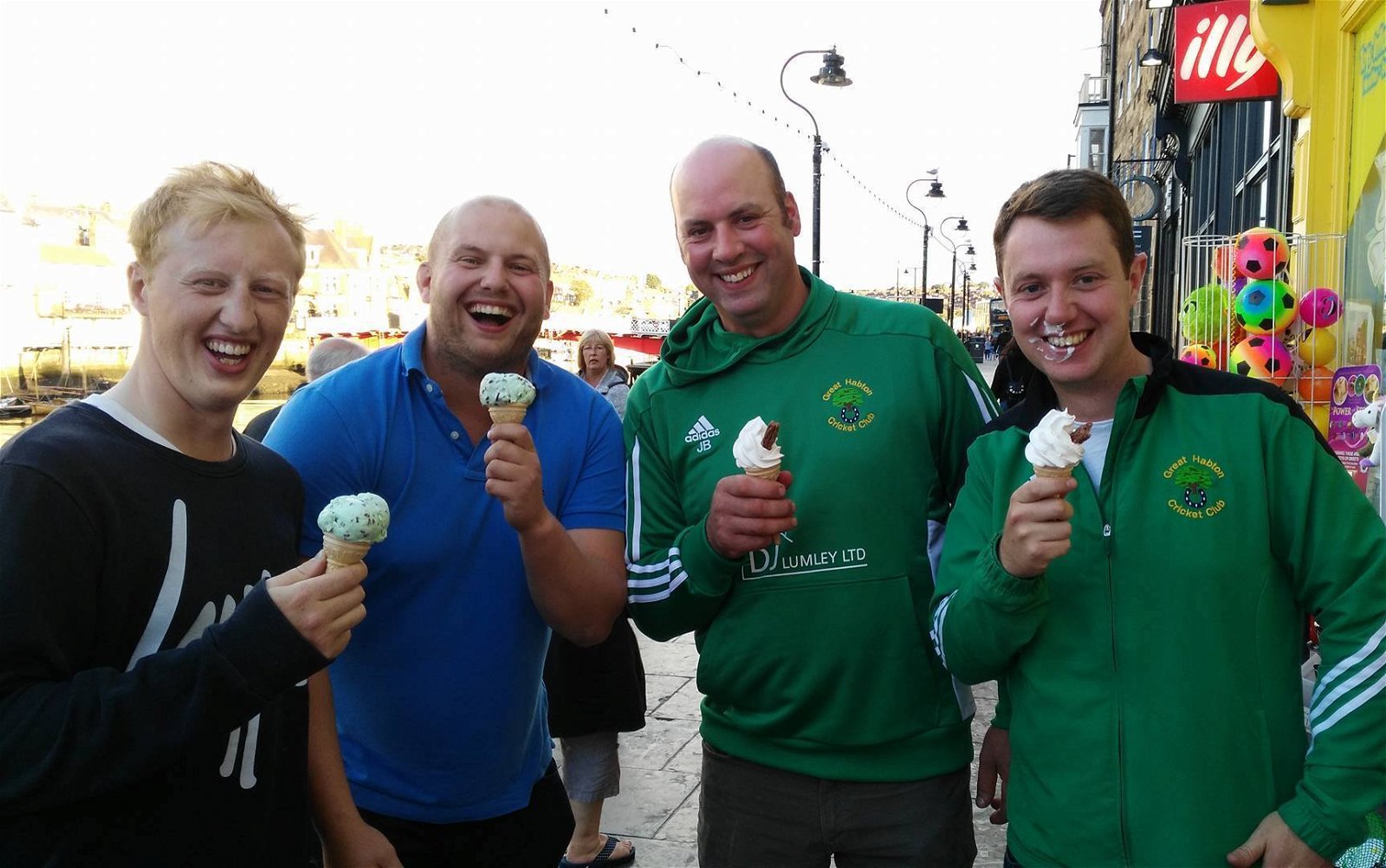 Great Habton CC players have fun away from the cricket ground. John Lumley second from left

“The grant applications fall short because they don’t ask what you’re doing to help keep young senior players in the game – it’s all about introducing young juniors… numbers. But there’s such a drop-off rate between the age of 16 and 21 that they need to start recognising clubs that retain young senior players. Most youngsters come through and realise cricket – or the club – is not for them because most clubs don’t have an ethos centred on enjoyment.”

Stockdale adds: “Some clubs go wrong by becoming too elitist, pushing standards more than participation, especially with young lads. We marketed the club with your typical village cricket narrative. We realised there’s a lot of young lads who want to come and have a laugh, and we don’t overcoach them.” 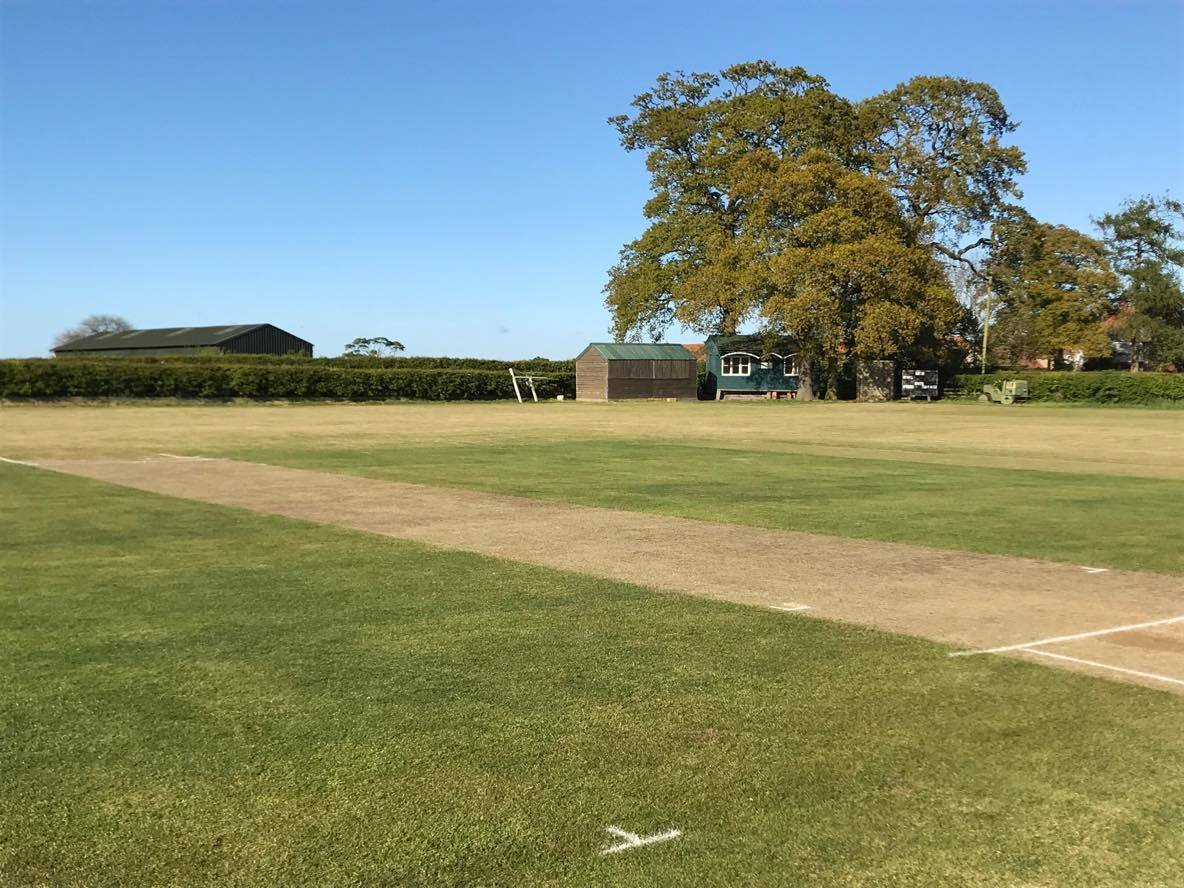 Maybe some clubs should reassess what constitutes success. Perhaps we shouldn’t judge a club by its covers. Lumley, who describes club cricket in Yorkshire as “not stable, but stabilising”, concludes with his top tip for small clubs: “Move from a professionalism stance to a social stance – stress you want people to come and have fun. The more they have fun, the more they’ll want to be there. The more they want to be there, the more likely you’ll turn them from members to volunteers.” There’s beauty in its simplicity.

Related Story: Teamo: Revitalising club management in a modern, digital world
Great Habton should serve as an inspiration to other longstanding village clubs to find their point of difference in order to compete with local powerhouses. Maybe team spirit, rather than bank balances or bulging trophy cabinets, can see the identities of these clubs preserved. And maybe then they’ll have their dramatic victory.

Can the Hundred be club cricket’s saviour? 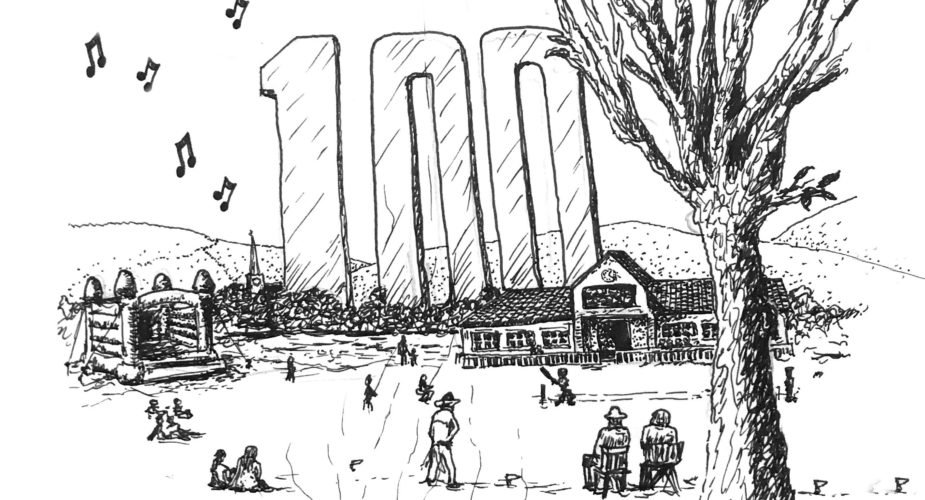 Whether you like it or not, the Hundred is coming

“When reducing the number of overs and balls you need to consider if you’re getting the balance right so that all 11 players get a decent game. I skippered a team for over a decade and this was a constant issue. T20 is probably the limit from that perspective. When batting you want more than a couple of balls at the crease, and as a bowler if you bowl anything less than three overs you feel short-changed. The danger is that some may not get much of a game and lose interest.” Hector Cappelletti – via Twitter

“The idea that amateur clubs will voluntarily play five-ball overs is a non-starter. Amateurs are going to play the tried and tested formats that work. This is a monstrosity of an idea. Junior cricket games change end halfway through each innings. It saves time with kids, but it’s not necessary for adult cricket, and some of the tactics are lost.” Adam Brown, cricket coach – via Twitter

“No, it can’t. Clubs are already struggling to convert T20 kids into weekend 45- or 40-over match players. The thirty-somethings “who want to still be involved but can’t play 8-10 hours on a Saturday” choose not to play.” Angus Smith – via Facebook

“No. The game has got used to 20-over cricket. The Hundred is only a change for change’s sake. No justification so far. No wonder it is dead.” Prabhakar Kaza – via Twitter

“The 100-ball game could be good for age-group league cricket or for time-pressed fathers wanting to play with their sons, but it will not save much more time compared to T20. Whether the 100-ball is a saviour at grassroots level is anybody’s guess, but it is worth a go.” David Rimmer – via email