Rod Edmond describes a dramatic finale to the league campaign for his club side Walmer which evoked images of seasons past on the East Kent coast.

Simon Raven’s cricketing memoir Shadows on the Grass (1982), described by EW Swanton as “the filthiest cricket book ever written”, opens with Raven on the field at Worth, a small village on the East Kent coast. It’s the first Sunday of October, the last match of the season. The remains of a fair – swings, roundabouts and slides – are being towed down the road from Deal towards Sandwich: “the cortege of summer, one more summer going to its long home, as the wind over the salt marshes brought the first of the evening chill”.

Raven lived in Deal, his publisher Anthony Blond having put him on a monthly stipend if he’d stay well away from the temptations of London – gambling especially – that were distracting him from his successful and critically admired Alms for Oblivion series of novels published between 1964 and 1976. It was during these years that he’d played cricket for Worth.

I was thinking about Raven’s prelude to his memoir as I took the field at Walmer CC’s ground at Deal on the first Saturday in September. It was a perfect early autumn afternoon – bright sun, clear skies, a light north-easterly breeze – a month earlier than Raven’s elegy for the passing of a cricket year, but with something of its end-of-season feel.

Our opponents were Minster, with whom we’d been neck and neck throughout the season. The winner would take the title and secure promotion

This was the last match of the year for Walmer 2nd XI. Our opponents were Minster, a team from the Isle of Thanet with whom we’d been neck and neck throughout the season. The winner would take the 2A East title in the Kent Regional League and secure promotion. There would be a long winter ahead in which to enjoy the memory of victory or live with the ache of disappointment.

Our captain, Liam Milroy, had, for once, won the toss and chose to bat on a pitch that, unlike most wickets in East Kent, has pace and bounce. Minster’s opening bowlers, Khan Maroofkhail and Khan Wali, made good use of it in an accurate penetrating spell and early wickets fell. Not for the first time this season Walmer were rescued by the son-and-father combination of Liam and Stuart Milroy. Liam made an aggressive 32 and Stuart, who played for Kent 2nd XI in the early 1990s, held the innings together with a patient and well-judged 57. But 153-9 after the allotted 40 overs was at least 30 runs shy of where we’d wanted to be.

The shadows were beginning to lengthen as Paul Ogburn handed out the sweets that he always distributes as we take the field, but there was more tension and urgency in the air than Raven had described at Worth.

Our 17-year-old opening bowler, Kieran March, bowling with aggression and subtle variations of pace beyond his years, took three early wickets to set Minster struggling. But their opener Henry Roberts settled in for a long innings and with stubborn support from the late middle-order Minster fought back, keeping up with the required run-rate as they approached our total. When Roberts was caught on the long-off boundary by Mark Birkett, a remarkable one-handed overhead catch that would have had multiple replays at a T20 final, it felt as if we were in.

At the start of the final over Minster, with their last pair at the wicket, needed nine to win

But Minster’s tail wagged and saving runs became as important as taking wickets. With the field now pushed back to the boundaries, a skied catch to short mid-wicket saw our wicketkeeper Andy Furness run at least 20 yards and make a despairing dive, the ball dropping just out of reach. I’d landed on the point of my shoulder diving to stop a boundary, lost the feeling in my right arm, and was dreading a high catch, any catch really.

At the start of the final over Minster, with their last pair at the wicket, needed nine to win. An over of skied catches not quite going to hand and a near run-out, until with one ball left Minster needed three runs. The last delivery was a dot ball, which sounds anti-climactic but it wasn’t. Kieran Marsh (5-34) led Walmer off the field and into the next division of the East Kent Regional League. 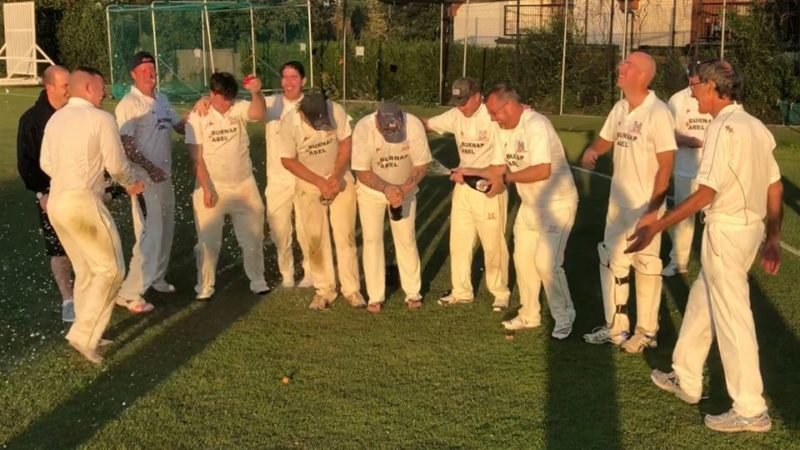 Later that evening, the pain in my shoulder dulled by the pints I’d sunk, I reflected on how club cricket in East Kent had changed since Raven’s time. Most obviously, there wouldn’t have been Afghani cricketers in the opposition. Khan Maroofkhaali and Khan Wali had taken four of our first five wickets to fall and their powerful hitting towards the end of Minster’s innings had almost won the game for their side. But in the end it was continuity rather than change that marked the day.

Walmer, Raven’s club Worth, and Sandwich, the team he was playing against that autumn afternoon around 50 years ago, are within five miles of each other. Walmer was founded in 1865, Worth is just a couple of years from its centenary, and Sandwich is more than a hundred years old. Three neighbouring clubs along this strip of coast – with its golf courses, sandhills and salt marshes – which have survived and prospered so long, in tune with the turning of the seasons.