The footballer Christian Eriksen’s collapse from sudden cardiac arrest at the Euros has thrown into focus the need for sports clubs to be equipped with the necessary equipment to preserve life in the event of disaster. Scott Oliver reports in issue 46 of Wisden Cricket Monthly.

It is difficult to think of anything more pulsating with life than a football stadium packed for a big game, fans roaring as elite players press their opponents into errors. In the 43rd minute of Denmark’s European Championship opener against Finland, Christian Eriksen harried the Finnish defender into conceding a throw-in, made himself available to receive it and, as he did so, toppled forward and collapsed. Sudden cardiac arrest (SCA), the fragility of life laid gruesomely bare.

Thankfully, the story had a happy ending, partly due to it happening where it did, with highly trained medical officials on hand to administer cardiopulmonary resuscitation (CPR). “You have five minutes,” says Robbie Book of the Club Cricket Charity, an adjunct of the National Cricket Conference. Book has spent the better part of four years evangelising for the roll-out of affordable portable defibrillators to cricket grounds, and did not agree with the widespread condemnation the live broadcaster of the Eriksen incident received (although much of the ire was wrongly aimed at the BBC). “People made a lot of noise, saying they shouldn’t have shown the situation on live television. As far as I’m concerned, it was unpleasant to watch but an educational process for the nation. I think, unfortunately, people need to be shocked into things.”

Not everyone is as ‘lucky’ as Eriksen, of course. The former Pakistan all-rounder Wasim Raja  died on the field while playing for Surrey Over-50s at Marlow in 2006, complaining toward the end of one of his overs that he felt poorly and failing to make it off the pitch before collapsing. Teammates tried to revive him with CPR but couldn’t do so.

In August 2012, 33-year-old seam bowler Richard Beaumont of Pedmore CC in Stourbridge, Worcestershire, collapsed on the pitch not long after taking five wickets for the club’s first team. He was airlifted to Queen Elizabeth Hospital in Birmingham but pronounced dead shortly after arrival. The cause was SCA.

In August 2017, 41-year-old Mark Collin of Effingham CC in Surrey died after suffering SCA during a match  at Newdigate. He was airlifted to hospital, where he was pronounced dead. Effingham had a defibrillator at their club, Newdigate did not.

“If anyone had a cardiac arrest and there was no defib and they died,” says Book, “I can’t believe there’s any family in England who would hold the club responsible. However, it’s your moral responsibility as a club, your duty of care to your members, to have one. Not just for players, but also spectators. You’ve got a pavilion, you’ve got a bar, you’ve got insurance in case someone robs you or burns you down. Surely this is the next stage? The average club has between 60 and 150 members. So, you’re talking a levy of £10 per person to potentially save someone’s life.”

Book’s self-professed obsession with defibrillators began when the Club Cricket Charity sponsored a survey in 2016, in which one of the questions asked what clubs would do if given £10,000. Surprisingly, every single response mentioned investing in a defibrillator. Book says he couldn’t even spell the word at the time, but spent a year looking into the cheapest way of providing these life-saving devices to clubs. He then started to lobby the ECB’s Facilities Group.

With ECB funding of £100k per year, a ‘pilot’ scheme was run for three years in conjunction with the Community Heartbeat Trust (CHT), supplier of portable AEDs (automated external defibrillators). Around 350 clubs have received one under the scheme, says Book, at a subsidised cost of £600 for a four-year lease, plus annual “contingency costs” of £150, with an option to buy for a nominal £1 at the end of the lease. This fee is less than half the usual cost, and includes training, insurance, local authority registration and PTS (post-traumatic stress) counselling, as well as mandatory participation in the remote maintenance and monitoring scheme, WebNos.

As of July 1, the ‘pilot’ project has been upgraded by the ECB to a ‘programme’, meaning an increase in annual funding to £400k and the possibility of supplying 870 units per year (the first 100 are to be given away free to hard-up clubs under the auspices of the National Asian Cricket Council). It is an urgent requirement, believes Book, given there are around 6,000 cricket organisations in the country. “Not only that, but many cricket clubs are remote, down narrow lanes out in the countryside, far from hospitals and air ambulances. You only get five minutes to save someone after a sudden cardiac arrest.”

According to the CHT website, each year in the UK approximately 60,000 people sustain cardiac arrest outside hospital and are treated by emergency medical services. “If defibrillation is delivered promptly, initial survival rates as high as 75 per cent have been reported. The chances of successful defibrillation decline at the rate of about 10-20 per cent with each minute of delay.” The good news for sports clubs is that 80 per cent of cardiac arrests happen at home, and of the rest, only about one per cent occur at leisure facilities. That is still, however, 120 SCA incidents.

Defibrillation – an electric shock applied to the heart that allows it to reset its rhythm, rather than a ‘heart- starter’ – is an insurance policy, not a panacea, says the CHT. “Even if available immediately, an AED would not be of use in 25 per cent to 30 per cent of heart disturbances caused by cardiac arrest, and CPR is the appropriate treatment.”

Such a situation arose in May this year, when Josh Downie, brother of Olympic gymnasts Ellie and Rebecca, collapsed while netting at Birkenhead Park CC (which has a defibrillator and a dozen members trained to use it). There was a doctor present, too, yet despite his efforts and those of the ambulance crew, Josh could not be revived. He suffered from arrythmogenic cardiomyopathy, a genetic condition affecting approximately one in 5,000 people.

Thankfully, some victims of SCA on cricket grounds do survive, through both the quick thinking of colleagues and, often, the crucial presence of defibrillators. Oz Christie, co-chairman of Histon CC in Cambridgeshire, was playing for the third team at Wimblington in July 2019 when his 62-year-old teammate Phil Vasey suffered a heart attack on the field.

“I had been scoring with Phil,” recalls Christie, “and we’d both said how rubbish the youngsters’ running between wickets was. So we got out there and were knocking it around. We’d just run a three and I looked up and Phil was doing ‘wobbly legs’, which I thought was a joke. Next thing, he’s fallen flat on his face. Bearing in mind, he’s got a helmet on.” 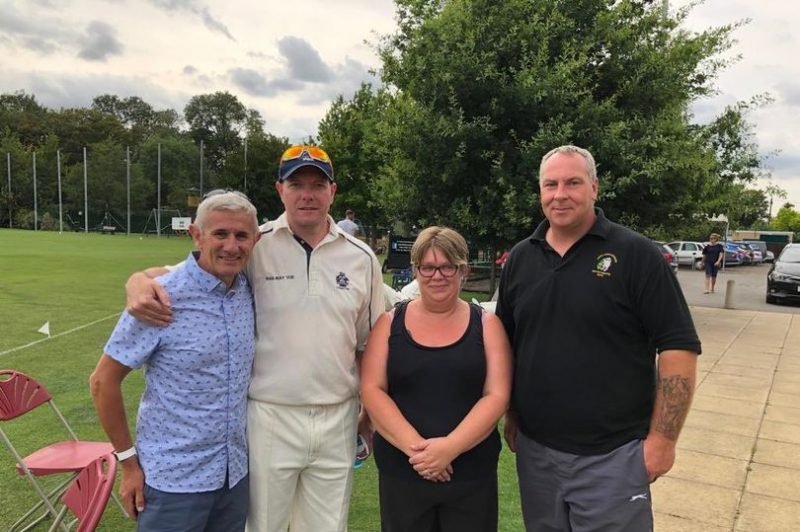 By chance, earlier that week Christie had listened to an explanation of how to use a defibrillator on TalkSport. He decided to take control of the situation. “Even before I got over to him, I started shouting for a defibrillator, although I didn’t know whether they had one or not. Our captain phoned for the ambulance. A big guy ran out with the machine, then started doing compressions. The first-aiders at their club seemed panicky. I just attached the defibrillator and hit the button. It said ‘no pulse found, shock recommended’. As soon as we gave him the shock, Phil started spluttering. There was an immediate change. His face had been pale. We carried on with the CPR, then the machine checked again and said ‘shock not recommended’. We did this until the emergency services arrived with a police car, fire engine, ambulance and air ambulance. He went to hospital, had an internal defibrillator and pacemaker fitted the next day and was out within a day or two, right as rain.”

It is a remarkable story, illustrating once again both the fragility of life and the good fortune to have been somewhere with a defibrillator. It is a deadly serious matter, affirms Book.

“I speak a lot about defibrillators, as you can imagine,” he says. “And it’s always interesting that they ask me, ‘Do you want to speak before or after the comedian?’ I never know how to answer. The comedians never thank me if they have to go on after I’ve brought the place down to zero. My classic speech at these dinners is to ask whether anyone has a stopwatch. I ask them to set it for five minutes, saying I don’t want to go on too long explaining things. The stopwatch reaches five minutes and I say, ‘That’s the amount of time you have had to identify the fact that there’s an emergency, call 999, and save someone’s life’. I tell you what, it doesn’t half work.”