A round-up of the latest club cricket news stories from across the shires.

Twenty-four cricketers from Blunham CC in Bedfordshire have broken a world record by playing non-stop for seven days – a total of 168 hours – to raise money for the club and local charities. They battled extreme conditions to beat the previous record of 150 hours and 14 minutes, having already broken it twice, in 2008 and 2010. “Heatwave temperatures of 32°C, a hurricane-like hailstorm, at one point the ground was under two inches of water and there was also a localised tree fire from embers of a pizza oven,” Connor Heaps, captain of Blunham First XI, told wisden.com. “[So many times] we felt that the game was on the edge of being abandoned but we had no choice but to continue. I saw a few of our players in tears on the boundary. We really rallied around each other.” 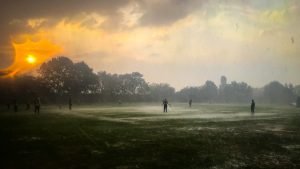 Histon CC overseas player Josh Brown had “the perfect end” to his season when the destructive batsman scored a 149-ball 290 – his personal best – as his side hit a club record 453-4 against March Town in Cambs & Hunts Division One, eventually winning by 298 runs.

Lancing CC’s Ryan Maskell and Matt Clarke put on over 400 for the second wicket in a cup final at Gerrards Cross CC on August 4, with the former bludgeoning 309 from 159 balls, including 33 fours and 21 sixes. Clarke also hit a century, while the final eight balls of the innings went: W 6 W W W . W 4, with Gabriel Warwick claiming a hat-trick in the final over. Twenty-four balls were lost in the surrounding properties during the innings. Lancing posted a mighty 470-6 before Old Monmothians CC were bowled out for 273. 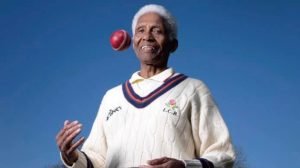 Cecil Wright, the former Jamaica paceman, is hanging up his bowling boots at the age of 85 after a career spanning 60 years, in which he’s taken over 7,000 wickets. Wright moved to England in 1959 and played in the Central Lancashire League for Crompton, where he bowled to the likes of Sir Garry Sobers. In his prime, he is said to have taken 538 wickets in five seasons – a strike rate of a wicket every 27 balls. Wright finished his club career at Uppermill CC in the Pennine Cricket League 2nd XI Championship.

Related Story: When Yuvraj’s ‘sore shoulder’ spared him from Gayle’s onslaught in the 175 game

The Lord’s Taverners hosted its first ever Girls Wicketz Festival at Repton School in Derbyshire on August 19-21. Fifty-five girls from Wicketz projects across the country attended the event, which featured competitive cricket, speeches, team-building exercises and workshops on social issues, including body confidence and online safety.