Taha Hashim recalls an innings from Tammy Beaumont which helped England smash a world record that had stood for mere hours.

Long-established as England’s premier ODI opener, Tammy Beaumont entered England’s T20I summer with something approaching question marks over her place in the side.

The emergence of Danni Wyatt as a consistent and brutal top-order batsman and Mark Robinson’s willingness to try new players – the likes of Bryony Smith and the re-introduced Amy Jones – meant it wasn’t out of the question that a poor summer in the shortest form for Beaumont, and strong returns elsewhere, could have left her fighting for her place in the side come World T20 time. 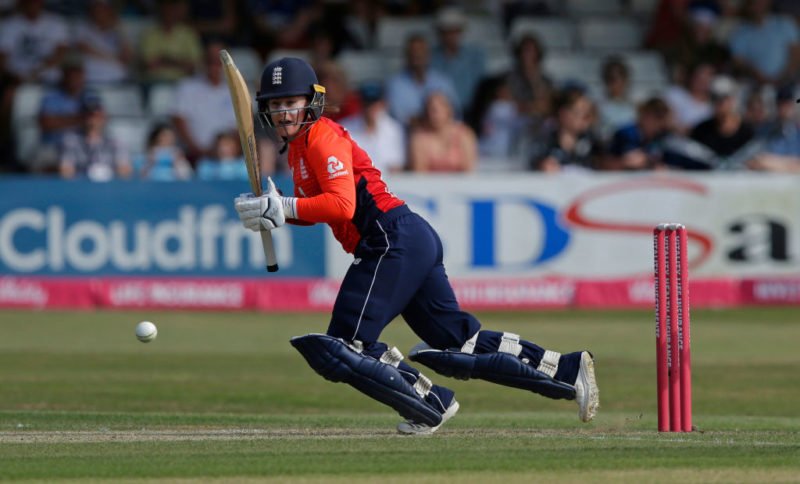 Beaumont’s hundred was the first in her T20I career

With this innings, she showed she was England’s player for all formats, displaying all the power and class that has made her one of the most formidable opening batters in world cricket. The carnage started from the get-go, and no bowler was spared punishment.

The boundaries, 22 in all, came thick and fast, but a few stuck in the memory. Beaumont advancing down the track to Masabata Klaas and turning a full-length delivery into a full-toss before smoking the ball over mid-on for four. Or her treating Sune Luus’ leg-spin with disdain, sending one straight back over the bowler’s head for six. She wasn’t to return. Beaumont’s fifty came up off 27 balls, and her hundred 20 balls later, brought up with a sweep for four off of Stacy Lackay, the second fastest ton in women’s T20Is.

Remarkably, she fell with almost a quarter of the innings left to bat, but cameos from Nat Sciver and Katherine Brunt ensured that England would power on to a world record 250-3. It was a day that summed up how far women’s cricket has come; just hours before, New Zealand had put up 216 thanks to a Suzie Bates century, also against the Proteas, a world record that stood for mere hours.

For Beaumont, the innings represented the climax of her year following on from back-to-back ODI hundreds against the same opposition just weeks earlier. She endured a poor World T20, tallying just 54 runs across five matches. If there’s any doubt she’ll come good, this golden Taunton day should serve as a reminder of her talent.