Over the last 12 months, women’s T20 cricket has undergone a revolution. Bigger scores than ever are being made and chased at a higher frequency, with the limits of what feels possible changing by the series.

In T20Is, five of the six highest team totals and the four highest successful chases have all come in the last 12 months, while in the same period the number of T20 hundreds made across all franchise and international T20s combined has almost trebled, from six to 17.

Through the hundreds the evolution’s path can be traced. Start from Suzie Bates’ 119* for Southern Vipers in last year’s Kia Super League, the first top-level T20 ton made in England. Then move through the final match of that winter’s Ashes, the first occasion on which two T20 hundreds were made in the same game. Then a fixture between India and England, which saw the latter gun down 199 with more than an over to spare.

And then finally to Taunton, when on June 20 the record for the highest total in T20Is was broken twice in a day, first by New Zealand, Bates again leading the charge with an unbeaten 124*, and then by England, Tammy Beaumont’s 116 underpinning a mammoth 250-3, which Danni Wyatt, who made a half-century in an opening stand of 147, describes as “a night I’ll never forget”. 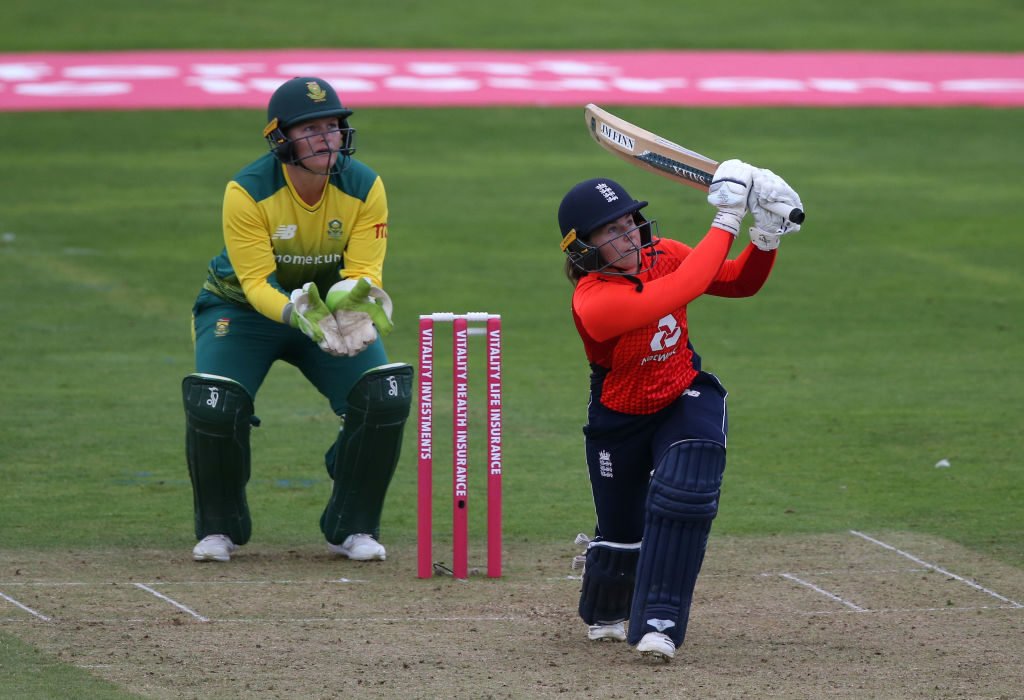 “I’m still buzzing off that actually,” she says. “We were lucky enough to watch the first game, South Africa v New Zealand, and Suzie Bates was smashing it everywhere, and I remember thinking, ‘gosh, the wicket looks good.’ And after New Zealand broke the record, I remember texting my dad saying, ‘there’s going to be another record broken tonight in our game,’ and then we went and beat it ourselves!”

Wyatt on... The Hundred

For me opening the batting it’s alright, but for someone batting No.4 or 5, they might not be interested in this 100-ball stuff. I’m easy, whatever happens I’ll go and do it.

Through all the landmarks listed above, Wyatt was ever-present, and more often than not played a significant hand herself. Apart from that game at Taunton, she was at the crease with Bates when she made that first KSL ton, and made hundreds in both the games against Australia and India as England twice broke the record for the highest T20I chase.

The only thing which has risen faster than T20 run rates over the last 12 months is Wyatt’s stock as a cricketer. All through her career she has been in and out of the England side, partly through mismanagement and partly through underperformance. There is only so much mitigating that can be done to the fact that it took her 124 international matches to make a half- century, but being shifted up and down the order with an ill-defined and ever-changing role hurt her more than it would most batsmen – as she admits, “I’m best when I’m just told what to do by [England head coach] Mark Robinson”. Having that message change by the game was a struggle. 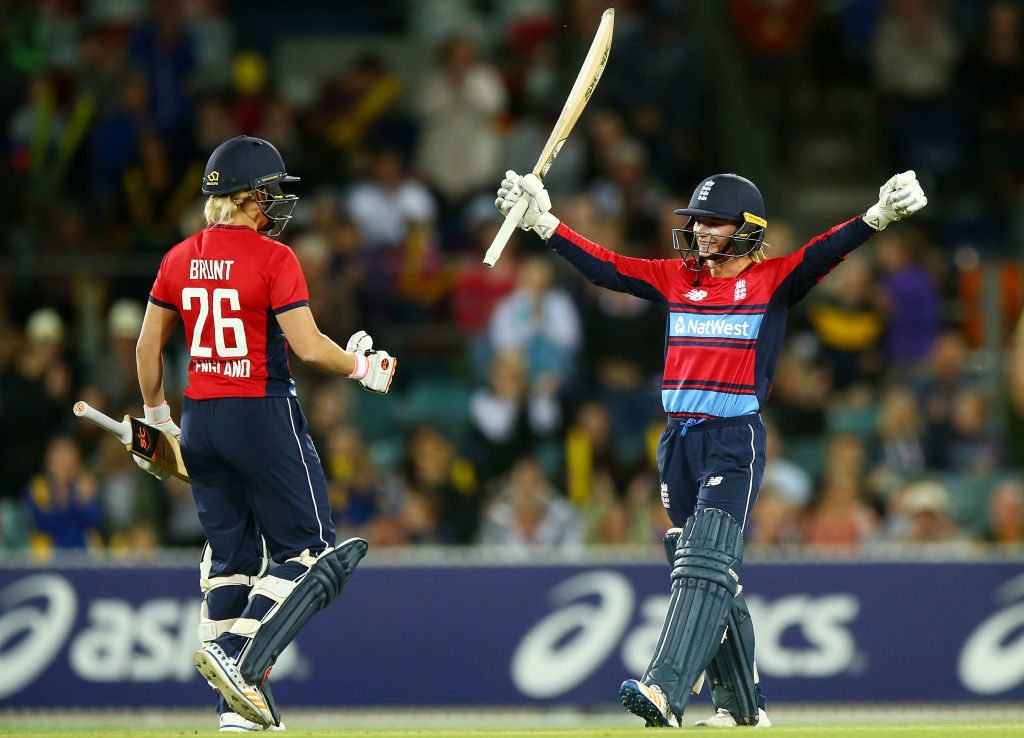 Danni Wyatt’s first ton was one of many watershed moments

Her job now is simple and suits her perfectly, something which is paying off hugely. The list of players who have grown in stature under Robinson’s stewardship is long, and Wyatt is no exception.

“I never thought negative thoughts, I was just annoyed I wasn’t playing because I always want to be playing. Knowing I’ve got them two T20 hundreds and a couple of fifties, it’s nice to know that I can do it.

“For myself, when you go out there to open the batting you’ve just got to play with no fear, just back yourself to hit every ball for a four or a six. That’s my job at the top of the order in the first six, just playing with no fear and backing myself, and if it’s in my area then go for it. That’s the way we’ve got to play, and Mark Robinson judges us on our intent. If we go out there and try and hit a six and it doesn’t come off, but we’ve played with good intent, that’s ok.”

Wyatt on... why the Vipers will be hard to beat

We’ve got me, Tammy and Suzie Bates top three, which is not bad! We’ve got Amelia Kerr, the New Zealand girl who just hit 232* against Ireland, Mignon du Preez from South Africa. We’ve got Charlotte Edwards, but she’s just going to be coaching. We’ve got [England seamer] Tash Farrant. We’ve got Katie George as well, the young left-arm quick, we’ve got a great squad!

Wyatt’s rise and T20’s batting explosion are inextricably linked. She is as likely as anyone to be able to decipher what’s changed to allow it to happen.

“The boundaries at Taunton were nearly what the men’s are, and we were smashing the balls into the stands, so it’s not the boundary size,” she says. “The bowlers get annoyed, they keep saying that the pitches are too good at the minute. But I don’t know if it’s down to the pitches or the skill of the batsmen – proper batsmen are now hitting 360, all around the ground which for a bowler is quite frightening I imagine.

“As a squad we all work really hard in the gym, so we’re all a lot stronger now than we have been in the past, so that’s got a big impact and a lot of it is down to the skill we’ve got now as well. We’re hitting way more sixes than we used to. The skill levels have definitely risen throughout the world, not just England, when we play Australia, New Zealand you can see it. Everyone’s got big ball-strikers now which is great for the women’s game.”

In England’s case, that ‘no fear’ mindset is also enabled by a long batting line-up which lessens the consequences of failure.

“At the minute we’ve got Amy Jones coming in at No.7. We’ve got Katherine Brunt coming in at No.5 or 6 who comes in and smashes it from ball one. We’ve got Sophie Ecclestone coming in at No.11 who played one of the best shots we’ve seen for a while the other night, when she pulled a bouncer for six. Everyone can bat, even Sophie Ecclestone today was batting for about half an hour in the nets, working really hard. It’s great to see, and it’s great to have that depth. It’s great for me at the top of the order knowing that I’ve got all this batting to come.

“In the past when I’ve not been playing, if I’ve been the 12th or 13th man I wouldn’t bat for about two weeks when I was on tour. I’d just end up throwing balls at the people playing which is not really ideal. But now everyone’s getting a real go, even the girls who aren’t playing, they always bat and bowl in the nets. Even Sophie Ecclestone, Dani Hazell, Anya, the girls down the order, they all get the same amount of time as the batters do which is great, because they might need to come in needing 10 to win off the last over, and then they’ll need to go from ball one, so it’s important that they keep working on their skills as well to make us a better team.”

There can be no doubt that batting has been changed, perhaps irrevocably. What remains undecided is whether that’s entirely a good thing. Bigger scores mean fewer close games, while purists also fear that the balance between bat and ball has been tilted too far in favour of the former. When the question is put to Wyatt however, she feels there’s no contest. 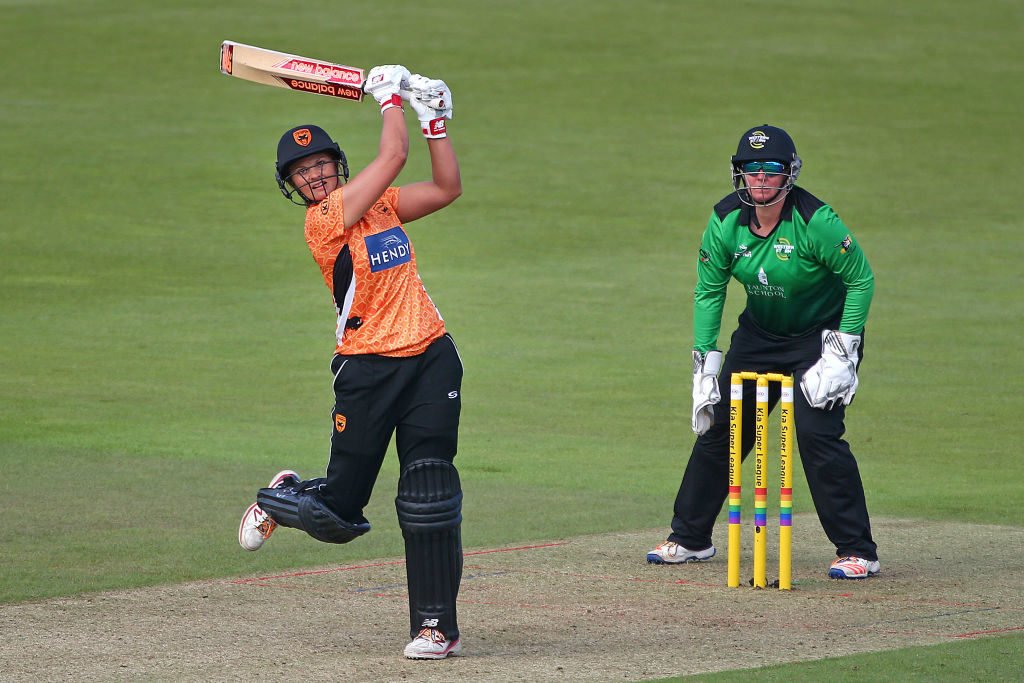 Bates on her way to the first KSL ton

“I’d definitely want to watch a team smashing it everywhere, hitting sixes galore. I think it’s great to see, especially in the women’s game, people think girls can’t hit sixes. I’m sure that’s what people pay for. It must have been a great day out for the people who came to Taunton when New Zealand scored 200-plus and we scored 200-plus to see all of those boundaries.”

I remember our tour there in 2016, the wickets were quite slow. It was like playing on a cabbage patch. We’ll talk about that closer to the time, but if the pitches are slow and low and the outfields are long then we’ll have to adapt quickly. That’s where our fitness will play a key role, we’ve got to be able to run twos and threes and I’d imagine it will be quite hot out there as well.

All of which means that this year’s KSL should be one to savour, firmly ensconced in this brave new era. Expect high scores, huge sixes, and hundreds galore. Bowlers beware. And with each team playing every other both home and away this year, there’s double the opportunity for carnage.

“I’ve always said I don’t know why we’re only playing five games, I think that’s a bit ridiculous,” says Wyatt. “It’s pleasing to play 10 games now, it’s a lot better. It was all about starting well last year because there were only five games, whereas now if we slip up once or twice we can still win it.”

There’s also the added spice of a World T20 on the horizon, with this November’s tournament meaning each clash between international players takes on added significance.

“For me, if I’m playing Loughborough and I’m facing Ellyse Perry and Rachael Haynes, and I’m smashing them everywhere, then that’s going to sit nicely in my head when I play Australia, thinking ‘I smashed her last month, I can do it again’ and she’ll be thinking, ‘I daren’t bowl it there because she’s going to smash me over my head’.”

After the 12 months she’s had, there’ll be plenty of bowlers with nightmares of Wyatt smashing them over their heads. Come the end of the KSL, there’ll surely be plenty more as well.