Lancashire wicketkeeper Ellie Threlkeld talks to Tom Evans about the uncertainty of a summer without The Hundred, learning her craft from one of the best there’s been, and why she’s “not miles away” from England contention.

This was supposed to be a massive summer for women’s cricket. Instead, months of uncertainty and doubt lie ahead, with players left in limbo between teams that don’t exist anymore, and franchises that haven’t played a game yet.

The Hundred, which was due to start in July, made a big deal of offering an equal platform (if not equal pay) to the women’s teams – they were given the same branding as the men’s sides and a few double-headers, as part of the ECB’s famous/notorious drive to attract more women and families to the game.

There was scepticism, especially when it was revealed the Kia Super League and its six T20 teams would be no more, after four increasingly successful seasons, but the higher number of franchises, with more slots for talented young home-grown players, carried the day.

So all the eggs went in one basket – and now the basket has been thrown up into the air. What will be left when it lands is anyone’s guess.

The ECB’s announcement on April 30 that the Hundred would be suspended for 2020 may not have come as a surprise. But for those affected, it was still a huge blow.

Ellie Threlkeld was an ever-present for Lancashire Thunder, initially as a batter and occasional wicketkeeper, then taking over the gloves full-time after Sarah Taylor’s departure in 2018.

That summer – after a call-up to the England Women’s Cricket Academy’s tour of South Africa – saw Threlkeld’s breakthrough performance, hitting an unbeaten 53 and effecting four stumpings in a Roses win at Headingley.

“I worked really hard this winter on my game and I was really looking forward to showing people what I could do,” Threlkeld, 21, said. “But obviously, that’s not going to happen now. I feel like I’ve got my head around that.” 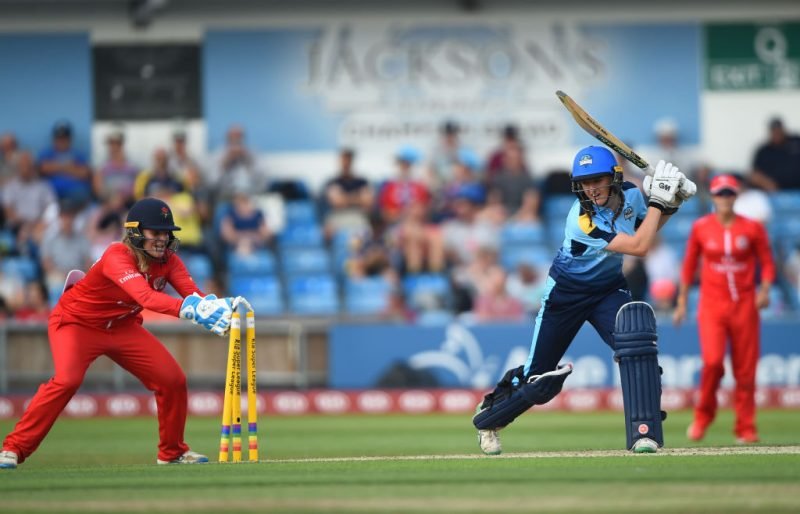 Against Yorkshire Diamonds, Ellie Threlkeld completed the rare double of a half-century and four stumpings in the same game

Threlkeld admits the cancellation was “probably for the best”. She feels the Hundred’s strength ultimately proved its undoing for this summer – even if the UK is ready to come out of lockdown in time, the same might not be true for the overseas players, and the ECB would prefer no competition at all than a watered-down launch without its star attractions.

She said: “It’s based around having the best players in the world. If it were to go ahead without overseas players, it sort of defeats the object of it being the best versus the best.

“It was built up so the best players in the world would have been involved, and if a lot of them are from overseas and can’t be involved… it is for the best, as unfortunate as it is.”

As for the future of the competition, there are more questions than answers – a situation that anyone following the inception of the Hundred will recognise.

Will there be a full redraft next year? Will all the overseas stars be available still? Will the ECB even be able to afford to put it on, given the way coronavirus has changed the landscape, and the amount of money the board was sinking into the new venture?

As far as Threlkeld is concerned, the new competition would have been good for the game – even if it maybe wasn’t necessary to ditch top-level T20 from the women’s calendar altogether.

She said: “A lot of people have said it’s not traditional, it’s not cricket – but I think the game has moved on from what it used to be. The shorter formats are what audiences seem to be enjoying. And the fact we’re sort of equal with the men is brilliant for us, and women’s cricket.

“The Super League was massive in terms of bridging the gap between county cricket and international cricket. Whether they could have done both, I don’t know – but people had just started to identify with the teams and it’s just been scrapped. But I really do see the benefit of the Hundred and I think it should be really good.

“In an ideal world, we’d probably be looking at both because there’s not a lot of T20 cricket – how are the England team going to prepare for a T20 series? So I think there could be room for both in the future.”

The current situation, of course, is literally a game-changer. Threlkeld is trying her best to remain stoical in the face of so much uncertainty.

“We don’t know what’s going to happen this year,” she said. “We’re just hoping that we’re going to get some form of cricket at this stage – what form of cricket that is doesn’t really matter. I think everyone just wants to get out on the pitch really.”

Threlkeld has good reason to want to continue the momentum of her career. Following the retirement of Taylor last year, she is keen to push her claim for a possible role with the national side.

While she was initially “gutted” to see possibly the greatest women’s wicketkeeper of all time ahead of her in the pecking order at Thunder, Threlkeld soon seized the opportunity to learn from the best.

She said: “Having Sarah around in training was always helpful, because she worked with me on my keeping. She was always a role model of mine growing up. It was a good experience – then she moved on, and I got the gloves properly, so it worked out quite well.”

Threlkeld thinks she’s “not miles away” from national contention, but knows there’s a lot of hard work ahead, particularly on her batting. It’s a challenge she relishes – though the psychology degree she’s studying for at Loughborough Uni means it’s not an all-or-nothing situation. 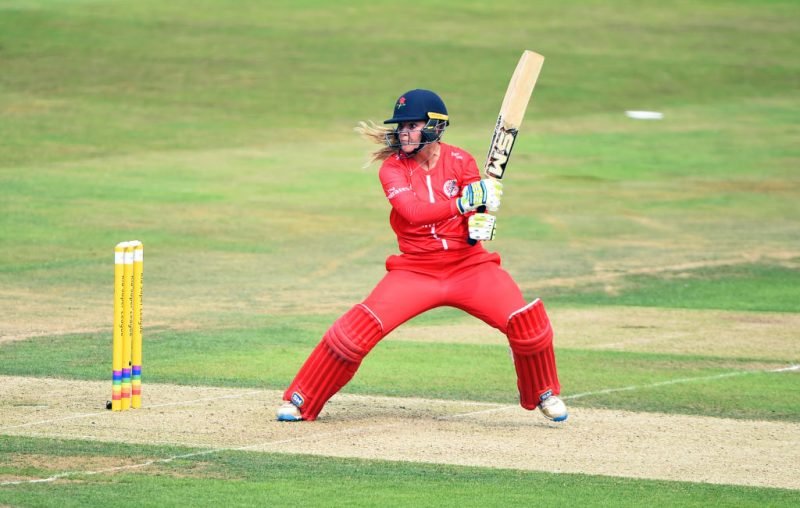 Ellie Threlkeld in action with the bat for Lanacshire Thunder

She added: “I think I’m going to need to prove myself in game situations but my ambition with cricket is just to do as well as I can. I’m playing the game for enjoyment more than having pressure on my back, so I think I’m in a better place than I’ve ever been in my cricket.

“If it happens, it happens, if it doesn’t then I’m also studying as well. I’ve got backup plans but obviously I’d love to make a career out of cricket.”

Also a footballer, Threlkeld was on Liverpool FC’s books in her younger years. But when cricket began to seem like a better prospect long-term, she moved to Wigan – a couple of tiers down the pyramid, and happy for her other commitments to take precedence.

Through a normal summer, she turns out on a weekend for Rainford CC, in a village near her native St Helens, keeping wicket for the men’s first XI.

She said: “I do love playing men’s cricket, it’s completely different – there’s plenty of banter and they’re playing more for enjoyment, so it’s a bit less pressure. So hopefully this year, some sort of club cricket will go ahead and I can get involved in that.”

The social side was key to Threlkeld’s introduction to the game, courtesy of her older brother, Will.

“He was a big influence on my career in both cricket and football,” she said. “He was a wicketkeeper as well, and I just sort of followed him.

“There were a few girls my age who had older brothers who played – unfortunately, they don’t play anymore, but at the time it was normal to get involved.”

Now, thanks to coronavirus, Threlkeld finds herself again taking comfort in family connections.

“Keeping myself physically fit isn’t hard at all,” she said. “It’s the only thing that gets you out of the house, so I’m actually quite enjoying that side.Being away from home for a few years made me realise I’m never going to get this time again with my family.

“I’ve been enjoying spending time with my mum and dad, just trying to see the positives in it all. And hopefully, it won’t be too long before we’re allowed out again.”