RP Singh‘s match-defining spell of 4-13 in India’s must-win encounter against South Africa at the T20 World Cup 2007 is No.4 in Wisden’s T20 spells of the 2000s, as picked by CricViz’s Freddie Wilde.

Left-arm quicks are popular in the powerplay because their angle across the right-hander means even when there’s no swing movement they challenge both edges of the bat. When there is swing movement then they are even more deadly.

In this 2007 World Cup match against South Africa RP Singh found the precious sweet-spot of swing movement and accuracy in a superb display of powerplay bowling. Defending a below-par total of 153 India needed early wickets and Singh provided them, setting up an emphatic Indian victory on their path to their epoch-defining World Cup win. 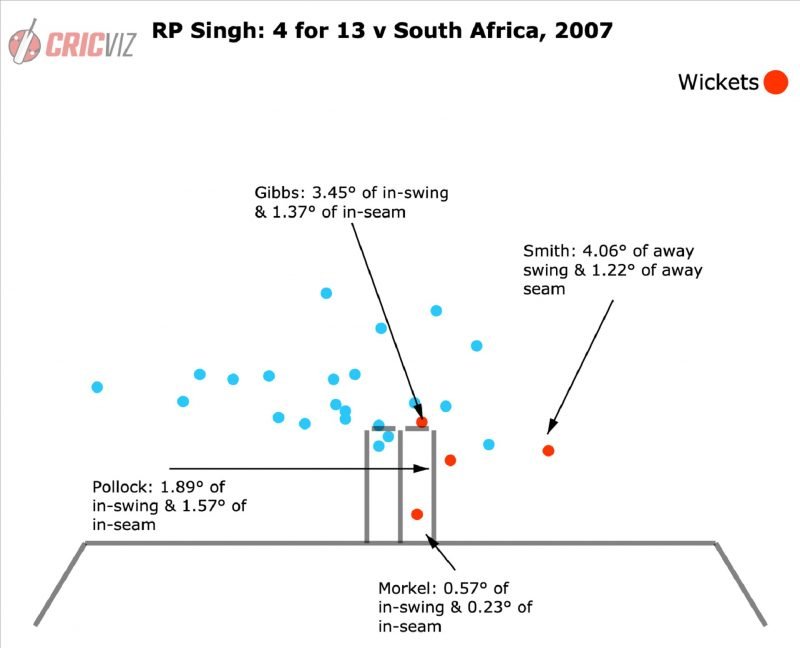 First in the firing line was Herschelle Gibbs. From over the wicket Singh bowled an attacking full length and tight channel line but found hooping inswing that beat Gibbs’ inside edge and struck him on the pad. Next up was the left-hander Graeme Smith. The over-the-wicket angle to left-handers relies more on movement than to right-handers but Singh was finding it and how. This ball was wide enough outside off stump to tempt the drive and Smith flashed at it but did not account for the significant away swing movement. A thick edge was stunningly caught by Dinesh Karthik at backward point.

With South Africa on the ropes at 23 for 3 Singh was given a third over and, emboldened by India’s position of dominance, bowled even fuller, castling Shaun Pollock off his pads from round the wicket with an inswinger. A fourth wicket in his second spell – another inswinging yorker to the left-handed Albie Morkel – wrapped up victory and set India on their date with destiny in Johannesburg four days later.