Occupying the fifth position in Wisden’s T20 innings of the 2000s is Andrew Symonds’ 117* against Rajasthan Royals in IPL 2008, as picked by CricViz analyst Freddie Wilde.

Andrew Symonds – a hugely powerful batsman, superb fielder and occasional bowler – was arguably the first great T20 cricketer. In 2004 he hit the second T20 century, for Kent against Middlesex, and one that remained the fastest until 2013. However, his IPL hundred – made four years later – was more impressive.

In the inaugural IPL auction Symonds was the most expensive overseas signing, costing Deccan Chargers $1.35 million. Heading into their third match against the eventual champions Rajasthan Deccan had lost both their opening matches. Arriving at the crease at 35 for 2 in the first innings, Symonds, under considerable pressure due not only to his price-tag and Deccan’s form, but the Monkeygate scandal that preceded the IPL, went on to crush an outrageous 117 not out off 53 balls. 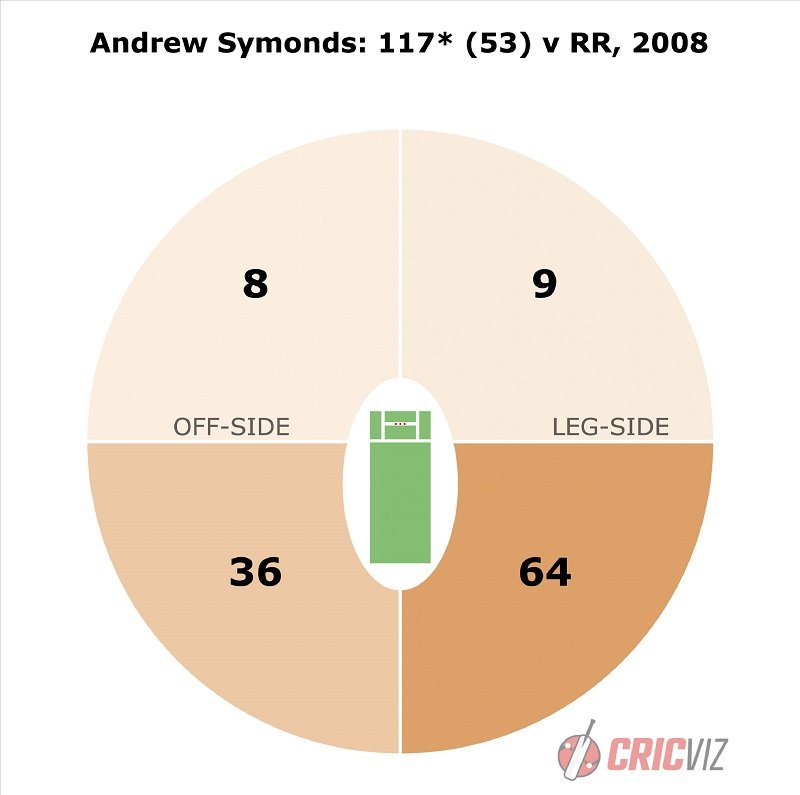 Demonstrating awesome bottom-hand power that would soon become commonplace but was still rare at the time, Symonds hit seven sixes, bludgeoning 35 runs off 13 balls from Shane Warne. Despite his aggression Symonds only missed or edged five shots, making it the century with the lowest false shot percentage of the decade – proof that power and rapid scoring rates need not come at the cost of control.