Brendon McCullum‘s brutal 158* in the first-ever Indian Premier League game is Wisden’s T20I innings of the 2000s, as picked by CricViz‘s Freddie Wilde.

A shoo-in at number one in this list. Irrespective of the decade, or indeed the format, McCullum’s blitzkrieg in the inaugural IPL match remains one of the most iconic innings in cricket history.

There were two layers to the greatness of this innings. Firstly, and most obviously, it was simply a stunning performance: his final run tally of 158 and his 13 sixes both set new world records for T20 cricket. According to CricViz’s Match Impact model which evaluates a player’s contribution to the final total relative to that of an average batsman McCullum’s 158 not out was worth +74 runs making it the most impactful innings of the decade and the eighth most impactful innings of all time. 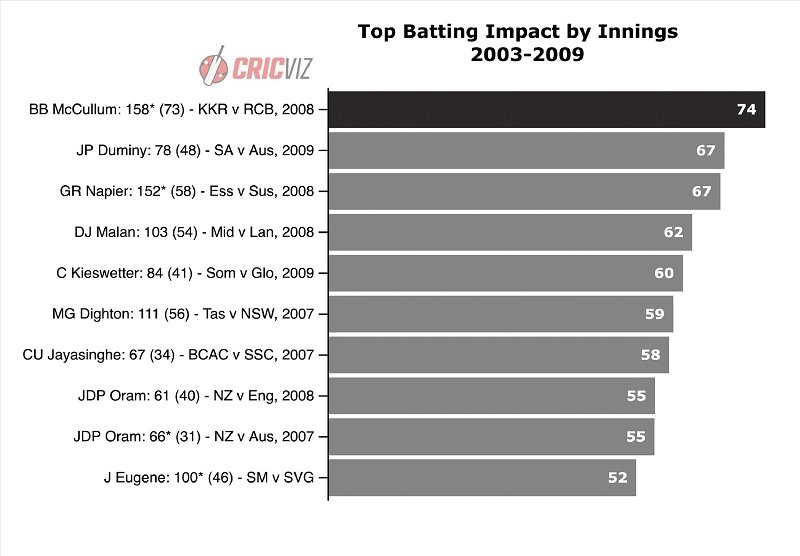 Taken in isolation McCullum’s innings was phenomenal and would have found its way into this list had it been played in any match. However, it wasn’t played in any match; it was played in the first ever match of a tournament that would transform cricket forever. For the IPL it was the perfect beginning. “It was when Brendon did what he did that I knew it would work,” recalled the league’s impresario Lalit Modi.

In truth the IPL would’ve worked anyway but McCullum’s 158 will stand forever as the totem of a new age.