Sachin Tendulkar’s 75-ball 98 against Pakistan in the 2003 World Cup is No.3 in Wisden’s list of the ODI innings of the 2000s. Manoj Narayan looks back at an innings where the master made the best look ordinary.

After the announcement of the fixture list for the 2003 World Cup, this match followed Sachin Tendulkar everywhere he went. He was pestered about this clash against arch-rivals Pakistan, at the biggest stage, at the peak of his powers (or so everyone thought at the time).

Even for someone used to carrying the team’s hopes for over a decade, that was relentless pressure. Tendulkar would reveal he hadn’t slept properly for 12 nights in the lead up to the match. “Frankly, everyone was talking about the India-Pakistan game, literally 10 to 12 months before the World Cup started,” Tendulkar later revealed to Wisden Asia Cricket.

“The build-up had reached such a level that when we got to South Africa, we kept getting phone calls telling us that, come what may, we had to win that game. For 12 to 13 nights, I just kept tossing and turning in my bed, thinking of the match. As it got closer, it became worse, and I just wanted to go to the middle and bat.”

When the moment of reckoning came, Tendulkar brought forth his best. There was no century, but this would go down as one of his best ODI knocks. In fact, it was one of those rare times when, despite India securing victory against Pakistan, there was some despondency – just a bit – because Tendulkar missed out on a century by two runs. And he deserved that ton.

Against the very best bowlers in the world – Waqar Younis, Wasim Akram and the menacing Shoaib Akhtar – Tendulkar’s fluency was firmly present. When Pakistan, led by Saeed Anwar’s 101, set India a 274-run target, the situation was tense back home. For the standards of the time, 274 was a daunting total. But within the first two overs of the chase, Tendulkar calmed those nerves considerably.

The first sign that he was in his element came in the third ball of the chase. Akram gave him just a hint of room outside off and out came that exquisite back-foot punch. But it was in the next over, against the express pace of Akhtar – he’d been hitting 150kph consistently in that tournament – that Tendulkar would really make a statement.

Three balls, three boundaries. The first was that famous six: when offered plenty of width, he made a calculated lash at it to get it over third man – the shot is still played in his highlights reel. He would follow it up with consecutive fours, the first a swish of the wrists to clip through square leg, and finally, that shot – a little step to the off, a solid, well-timed prod without a hint of back-lift… and four.

Pakistan threw everything they had at him. But every time they picked up a wicket, Tendulkar would do something to drain their momentum. Within 11 overs, the 90-run mark had been breached. Tendulkar had Mohammad Kaif for company – they put on 102, even running four at one point – and during the course of the knock, he brought up his 60th ODI half-century.

Unfortunately, as he neared his century, he cramped up. He was in visible pain, and struggled to complete runs, so much that, when he was in the nineties, Sehwag had to be called on to be his runner. However, the pain, as well as the break in the play, gave Pakistan their opening. Akhtar was back and he sent in a perfect bouncer, which reared towards Tendulkar’s head. He had no option but to fend it away awkwardly on the jump, and the catch, taken at point, prompted wild scenes among the Pakistan fielders. 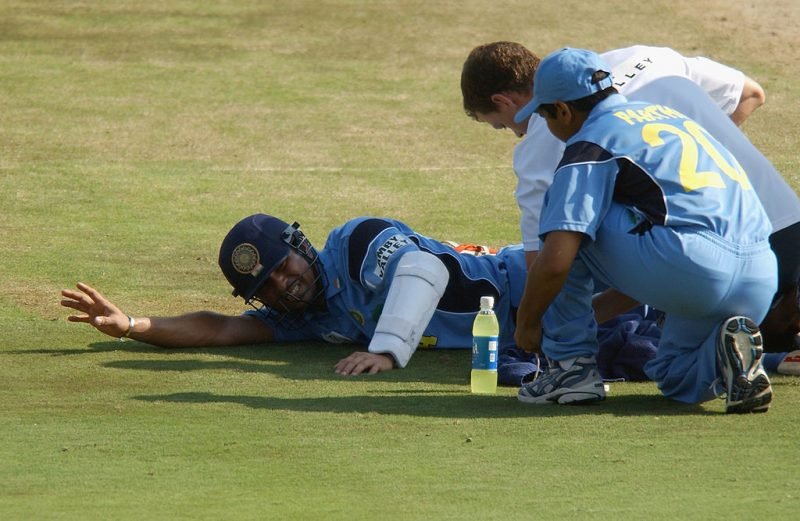 Sachin Tendulkar suffered from cramps and was soon dismissed for 98

As Tendulkar limped off, there wasn’t a sadder sight. He deserved that ton, for batsmanship ahead of his time. India still needed a little less than a 100 to win from that point, and Yuvraj Singh and Rahul Dravid would see them through to a famous win.

The nation rejoiced. Tendulkar would finally be able to sleep in peace.