The new issue of Wisden Cricket Monthly, out on August 12, is an England v India special, celebrating the marquee series of the summer.

Elsewhere, Sir Ian Botham takes us back to 1981 and the most iconic series of them all, Matthew Hoggard opens up to James Wallace about the defining moments of his career, Sir Andrew Strauss sits down with John Stern to discuss the game today and his place within it, and Sandeep Lamichhane, the Nepalese leg-spin sensation, describes the cricketing revolution taking place in his country.

There’s also stacks of domestic cricket in ‘The County Files’, featuring news and interviews from all 18 first-class counties. This month we hear from, among others, Phil Salt, Marcus Harris, Michael Hogan and, the county game’s latest breakout star, Warwickshire’s Chris Benjamin.

As ever, our columnists pull no punches, as Andrew Miller laments England’s misuse of Moeen Ali, Elizabeth Ammon investigates the effect of the ‘pingdemic’ on county cricket, Isabelle Westbury warns of the dangers of pigeonholing players and, our latest recruit, Wisden Almanack editor Lawrence Booth, gives his verdict on the first fortnight of The Hundred. Another full-to-bursting issue is rounded off by the brilliant Andy Zaltzman, who examines – in mind-boggling depth – the number 18.

“That was the decision I made after my first shoulder injury [in April 2019], which at the time was apparently the best thing I’ve done for my batting, and then you get out twice lbw and suddenly it’s the worst thing you can do, so it’s funny how it works out. We try and keep it in our four walls. We know the best way to adapt to these conditions that we’re playing in.”
Ollie Pope says he won’t be changing the off-stump guard which has attracted criticism from pundits when he is fit to return to England’s Test side 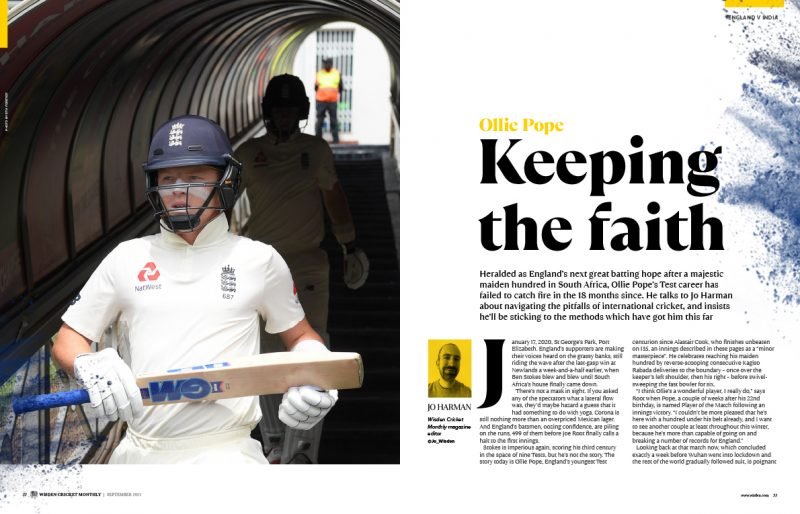 “The Indian cricket team is held up as the ideal, where religion and caste and class don’t matter, where talent rises despite circumstance. Siraj is shown as its embodiment.”
As a Muslim from an underprivileged background, Mohammed Siraj is an outlier in India’s squad. Karunya Keshav examines the charismatic fast bowler’s rise to the top

“We know all about the vagaries of form. But this was something else. Rarely if ever in British sport, let alone this corner of it, can a youthful prodigy have fallen so far, so emphatically, and in such agonising slow motion, and for so long.”
Take your seats ladies and gentleman, it’s time for the third act of Haseeb Hameed’s incredible journey, writes Phil Walker 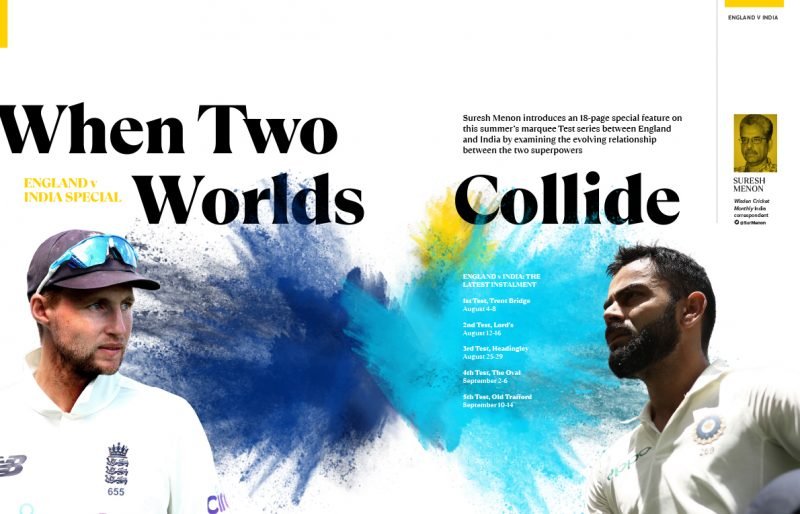 “For the last five years I’ve been saying if we play red-ball cricket here, Nepal will be a Test nation very soon. If we start now, maybe in five, six or seven years’ time. But if we are still talking about it and not playing it, then it could take a hundred years.”
Sandeep Lamichhane speaks to Jo Harman about Nepal’s burgeoning love affair with the game

“My job was to be on the shop floor sweeping up. I wasn’t going to get the headlines. If I tried to do anything out of the ordinary and bowled a bad ball, Michael Vaughan would say, ‘Get back down those steps onto the shop floor’.”
Matthew Hoggard recalls his role as the workhorse of England’s pace attack

“The problem I had [as captain], when someone drops the simplest of catches, you all go and pat him on the back; well, I’d go and kick him up the arse.”
Sir Ian Botham recalls the extraordinary events of 1981 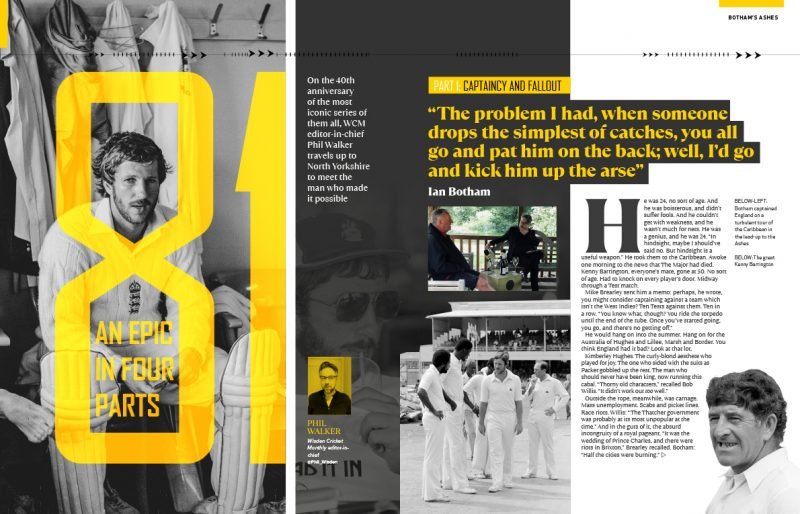 “One bad Test against Australia at Edgbaston, weeks after Moeen had lost his place at the sharp end of the World Cup campaign, was seemingly enough to justify his demotion on performance grounds, without any recognition that his performance might already have been slipping due to his mental state.”
Andrew Miller on the mishandling of Moeen Ali

“I learned so much – running a department of people is very different to captaining a team. I loved every moment of that period with the ECB, but I also felt that it was about coming in, trying to leave your mark, trying to create a better place, and then departing stage left. I never saw it as a forever job for me.”
Sir Andrew Strauss talks to John Stern about his careers on both sides of the boundary 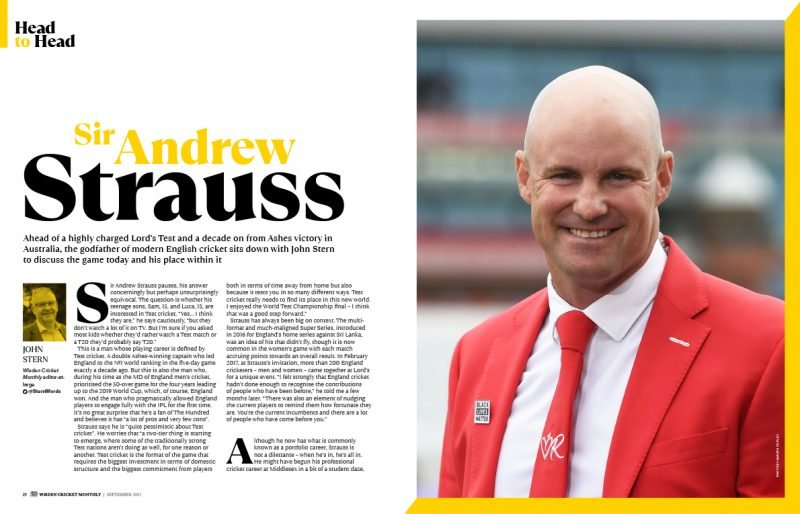 “If anything, I’m more keen to make a name for myself in red-ball. Test cricket is the pinnacle. My numbers keep improving each year and I’m getting better with more knowledge of the game.”
In ‘The County Files’, Sussex and England batsman Phil Salt on his cross-format ambitions 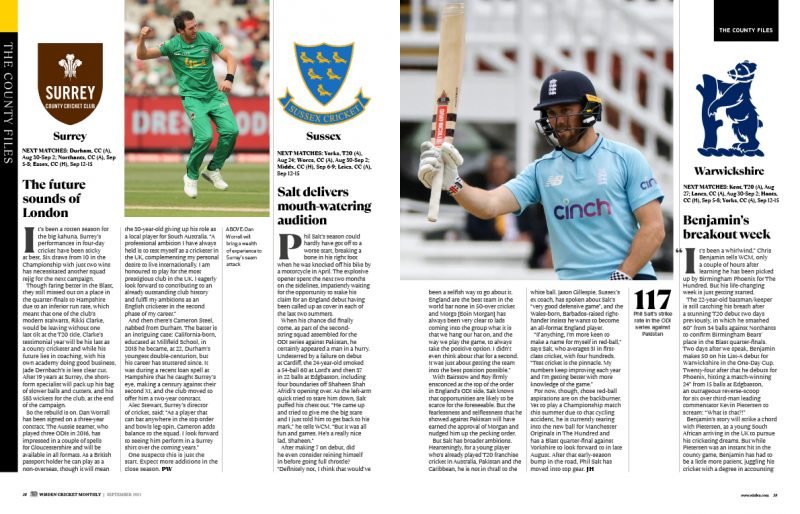 “What was hard to stomach was the disingenuousness of much of the coverage. When the IPL began in 2008, there was sneering in England about the broadcasting: the commentators, we felt, ought to have been waving pom-poms. Yet it was no worse than the early days of The Hundred.”
New columnist Lawrence Booth gives his verdict on the opinion-dividing new competition 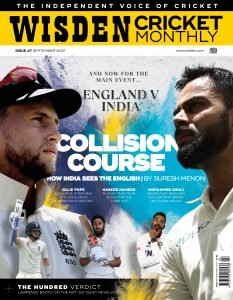