Wisden Cricket Monthly’s first issue of the new decade, out January 30, includes a special report into the English game, assessing the current state of play and investigating what the future holds for cricket in this country.

In a series of articles across 24 pages, we consider The Hundred and its wider impact, the future of the women’s game, the affordability of domestic and international ticket prices, the measures in place to tackle corruption and the issue of grassroots participation, focusing in particular on the ECB’s South Asian Action Plan.

“Much of the following, I think, can be read in a cautiously positive light,” writes Phil Walker, WCM’s editor-in-chief, in his scene-setter. “In other respects, and in the context of a neurotically fragile institution jostling for space in a crowded cultural landscape, these articles serve as urgent reminders that cricket’s work is never done. And as we move into a new decade, with no let-up to the pace of change, these pieces remind us, too, just how precious is this thing for which we fight.”

Elsewhere, we have a rare and important interview with Ravichandran Ashwin, who speaks to John Stern about using his platform to raise awareness of climate change and pollution. “This isn’t propaganda,” says the Indian spinner. “It’s just me leaving a footprint of who I am.”

We also have an exclusive interview with Sri Lanka’s great fast bowler Lasith Malinga, Phil Walker explains why Ollie Pope is the best young batsman in the world, Andrew Fidel Fernando reports from Pakistan on the long-awaited return of Test cricket to the country, and Worcestershire seamer Pat Brown reveals how to bowl his trademark knuckle ball.

And our team of columnists are in their usual excellent form: Adam Collins looks at the stratospheric rise of Marnus Labuschagne, Andrew Miller says Joe Denly may only be truly appreciated when his “stop-gap” Test career is over, and Lawrence Booth picks out the cricketer who popularised the reverse sweep in his ‘Influencers’ series.

“The Hundred protects the 18-county model. It is all about growing the game, which is fundamental in protecting cricket’s long-term future, and with it our 18-county structure, Test cricket and all the other non-negotiables. I can assure you that the ECB is committed to the 18 first-class county model.”
ECB chief executive Tom Harrison – one of seven stakeholders with different roles in the game who share their thoughts with us on the opinion-dividing new competition – insists The Hundred will benefit the overall county structure 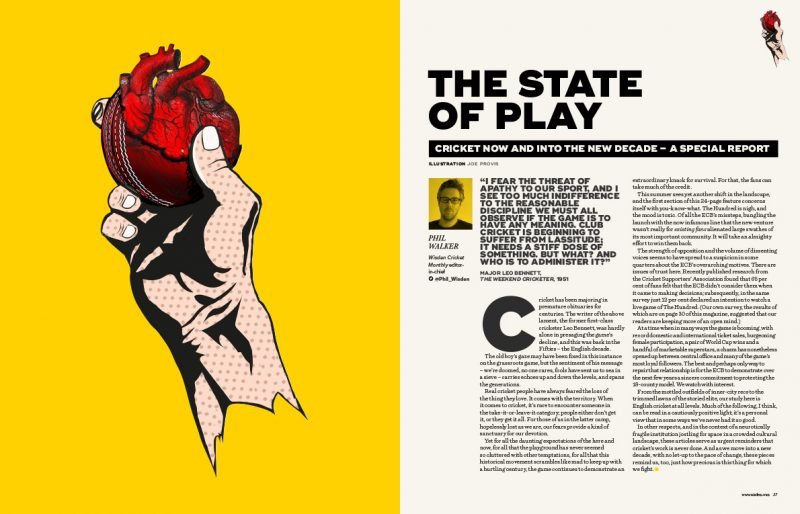 “I don’t have an issue with the tournament in many respects, having seen a lot of the figures around recreational cricket and participation. What I worry about is that we’re dropping a stone into the middle of the pond. I don’t have an issue with the stone; what I worry about are the ripples it’ll create.”
Will Brown, Gloucestershire’s chief executive, sounds a more cautionary note

“The ECB have taken a Donald Trump approach, defending the new tournament by repeatedly stating that everything is marvellous, when the view from the shires is very different.”
James Buttler, founder of ‘Oppose The Hundred’, argues the ECB have got it all wrong

“It has long been evident, both from the early numbers (staggering) and the style (lab-tested Bell-Root hybrid with Mark Waugh braced front leg), that English cricket had an unusual talent on its hands.”
Phil Walker on the emergence of England’s new batting star, Ollie Pope 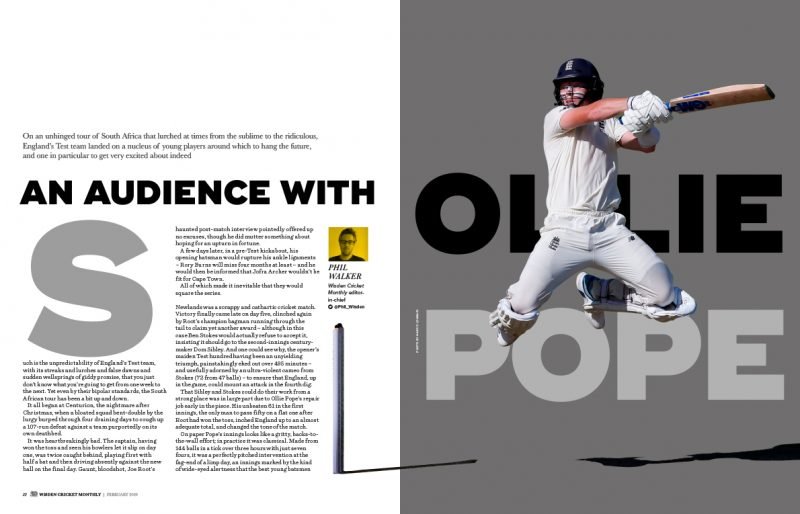 “Labuschagne has found the ideal man to mimic. It might appear weird for him to – using his own descriptor – ‘idolise’ a teammate, but Steve Smith’s one-track mind, and his equally obsessive interest in batsmanship, has proven the perfect example. They watch each other, they push each other, and they’re now the best of mates.”
Adam Collins on the making of Marnus Labuschagne

“This is starting to affect our day-to-day life. The air is full of smog and we have to be more careful in terms of what we’re doing to the planet. You have issues with chemicals in some parts of the country, air pollution in others. You have problems with water and drought. I’m sure it’s all man-made – it’s not just like nature is evolving against human beings. It’s important to understand that everybody’s in it together.”
Ravichandran Ashwin speaks to John Stern about the plight of our planet 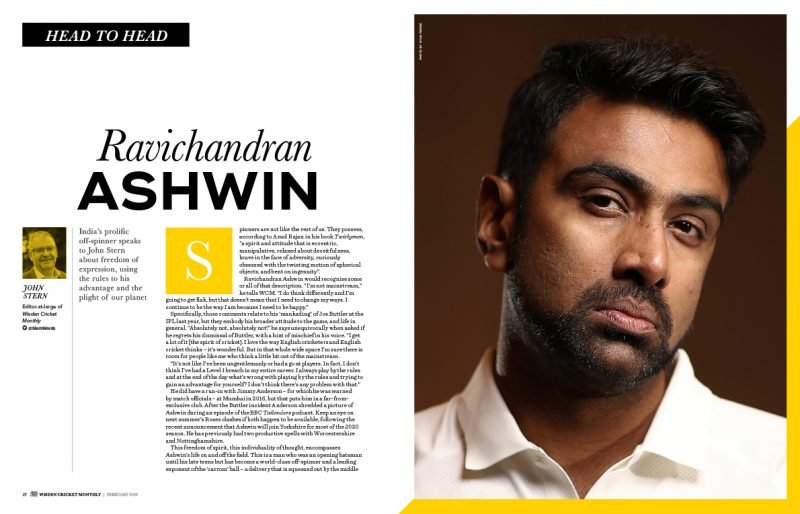 “Unfortunately I couldn’t help laughing. Batsmen tend to take it personally when you give them difficultly but it was so funny.”
Franklyn Stephenson on bamboozling batsmen with his trademark slower delivery in ‘A Cricket Life’

“A bowler who plays with a perfectly coached action and is not a matchwinner is of no use to anyone, even if they play for their country for 10 years.”
Lasith Malinga, the great Sri Lankan fast bowler, speaks to Saj Sadiq about the benefits of individuality 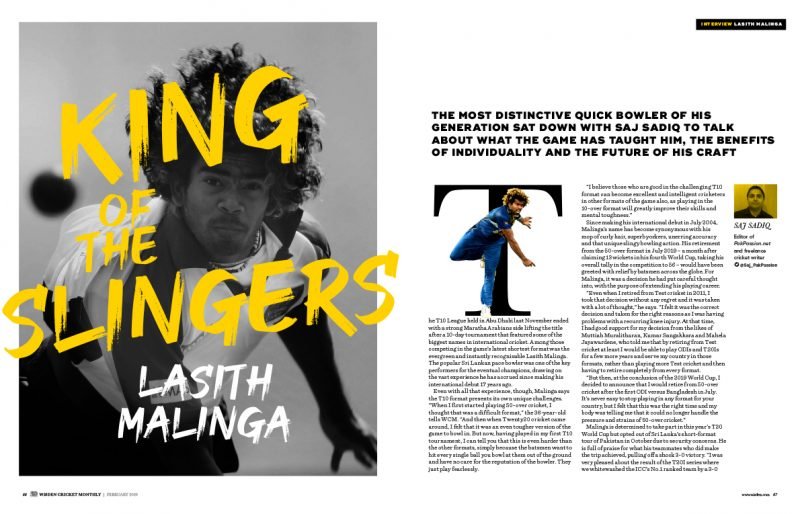 “At times in the series, it seemed as if Pakistan had not been awaiting the return of Test cricket as much as aching for the arrival of Babar Azam.”
Andrew Fidel Fernando gives a personal account of Sri Lanka’s landmark tour of Pakistan – the first Test cricket played in the country for a decade 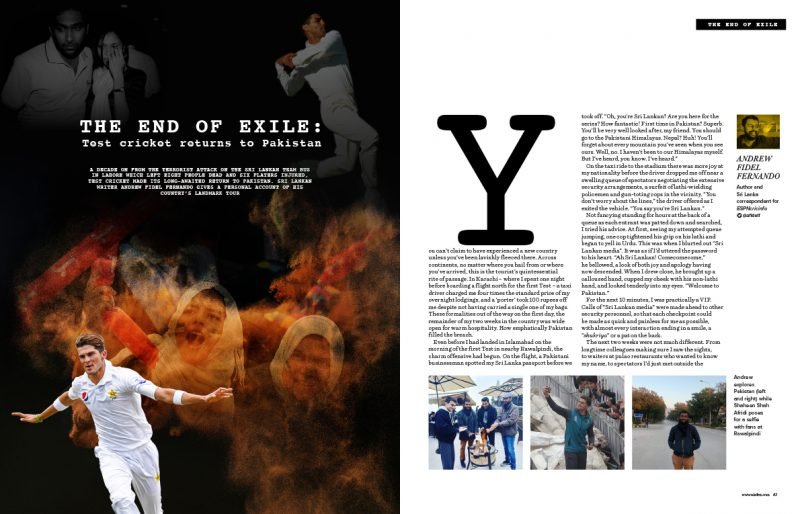 “I’d like to watch some chaps chatting around a plinth when I get in. Anyone will do really. Butcher. Banger. Bumble. Rob Key would have to be there. I’d stare into his soul, wonder if we’re related. Wishing we are. Please.”
Poet and comedian Tim Key imagines his ‘Perfect Day at the Cricket’ 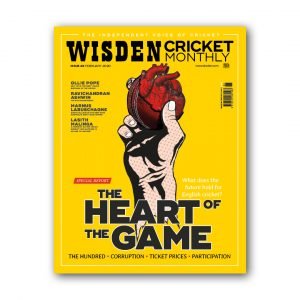