Around the turn of the century, even a second-string Australia Test side might well have been among the best in the world, and Stuart Law could well have been their captain.

The right-hander was a titan of county cricket and Australia’s equivalent, the Sheffield Shield, finishing his career with over 27,000 first-class runs, an average just above 50, and 100 professional hundreds to his name.

However, only 54 of those runs came in Australian Test whites, with Law making an unbeaten half-century in his only Test innings, meaning he finished his career without a Test average. He was a natural fit for Wisden’s ‘What could have been’ Test XI, featuring only players with 20 or fewer Test caps.

But while that Australian side was perhaps the greatest to have played the game, featuring the likes of Matthew Hayden, Justin Langer, the Waugh twins, and Ricky Ponting, all among the greatest to have worn the Baggy Green, there is still a case to be made that Law was hard done by, and on the latest episode of the Wisden Cricket Weekly Podcast, host Yas Rana and Wisden Cricket Monthly magazine editor and editor-in-chief Jo Harman and Phil Walker discussed the circumstances around Law’s continued omission.

Jo Harman: I know a lot of Queenslanders just can’t figure out why Stuart Law just didn’t play more Test cricket. I know there’s a feeling that there was a sort of anti-Queensland bias around that time, Stuart Law’s spoken about this as well. He was a slightly confrontational character, I don’t know if that counted against him at certain points in his career as well.

And also, obviously, that was an extremely good Australian side, arguably one of the best to play Test cricket. It goes to show the strength of that Australian side that a player of Stuart Law’s ability played one Test innings in his whole career.

Phil Walker: At that time from ’95 through to ’99 he was the best batsman in England, in and out of the Test side. He became this lightning rod for just how far advanced Australia were from England at the time that he couldn’t get in the side and yet he would be the best batsman in the England Test side. I don’t think there would have been any doubt about that. There’s something else to add about Stuart Law.

It’s not just the record – he averaged 50 and a half with 79 hundreds – it was the way he did it as well. Just like Ponting felt ahead of his time, so Stuart Law fits into that category as well. There were a lot of similarities in the way that they played. They were both front-foot players with the ability to rock back on the back foot and punish the short ball as well. He was a forerunner for the techniques that you now see as standard in the modern game, and he could dominate anyone at any time. 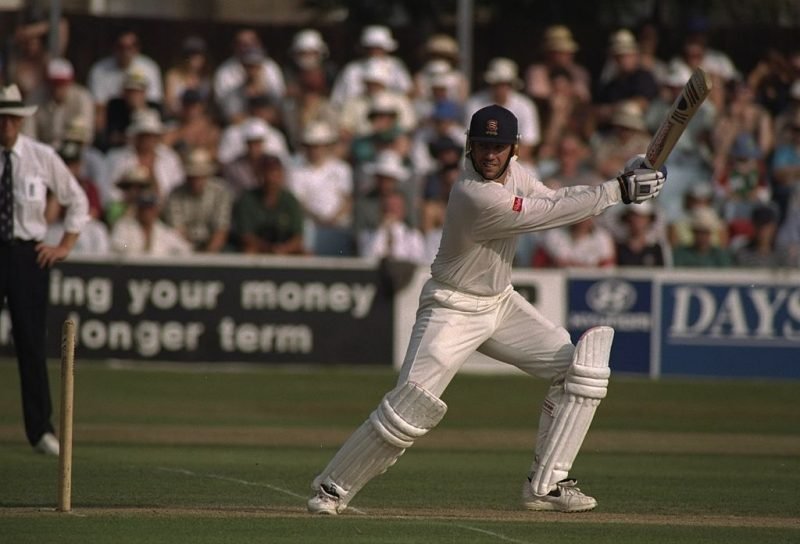 Stuart Law was a titan for Essex in county cricket, but played just one Test for Australia

Yas Rana: As good as Australia were, do you think that he should have got more opportunities then? Was that something that a lot of people thought at the time? Australia were amazing, but was he unlucky to be behind some of them? Greg Blewett played 43 Test matches, had a very similar career span to Law. Damien Martyn had a great Test career as well but struggled early on. Should Law have got more opportunities?

Related Story: Quiz! Every teammate of both Ricky Ponting and Steve Smith in Test cricket

But the thing with Law was, he played a fair few ODIs, I think he played 54 ODIs, and though he made a hundred in the World Cup in ’96, he didn’t really do much else elsewhere, and if he’d had a more fruitful one-day career I think that would have pushed his Test credentials a bit further down the line. But if you’re talking about luck, then he’s one of the most unlucky cricketers of the modern era, without a shadow of a doubt.