Tim Paine’s toilet trouble towards the end of Australia’s Ashes-retaining win in the Old Trafford Test last summer might have caused mirth and disgust in equal measure, but it’s not the first time an Australian cricketer has faced a tough decision about whether a No.2 is their No.1 priority.

In the first Test of Australia’s 2016/17 tour of India at Pune, opening batsman Matt Renshaw was unbeaten on 36 from 89 balls when he felt an unquashable urge to use the bathroom, following David Warner back to the pavilion after the former’s dismissal for 38 and passing his captain, an unamused Steve Smith on the way.

“At that point I was thinking I should start a petition where there’s a portaloo at the edge of every field so you can just go off if you need the toilet,” Renshaw said on the Wisden Cricket Weekly Podcast. “It’s quite a funny story. Part of me wishes it had never happened, part of me wishes I’d stayed out there and seen what happened. I think it would have been worse but I think the story would have been a lot better. Rather than just running off to go the toilet you stay out there and keep batting and then all of a sudden it just comes down.”

“It was weird because we’d just lost a wicket. At the end of the over I was probably going to go anyway but the fact that we lost a wicket and Steve Smith was walking out to bat, Shaun Marsh was up in the dressing room thinking he was next in, and I just start running off the field. He’s padding up quickly, running on the field as well, we sort of lose two for none there if you think about it. I just remember going, ‘I need to go to the toilet, I need to go, can I retire hurt?’

“I said, ‘Can I retire hurt?’, and [the umpire] was like ‘You can retire,’ and I was like ‘No, no, can I retire hurt?’ Because obviously if I retire I’m out, and I can’t have that. If I would have had to retire out you probably would have seen a lot more than just me running off. And then as soon as he said, ‘Yes you can retire hurt’, I was gone, and then Smithy was like, ‘No come back’. I’m like ‘Smithy this is really important that I run’, and he was like, ‘OK go then’. I think he was quite angry at me just because he was so confused about what was going on and then I just bolted. 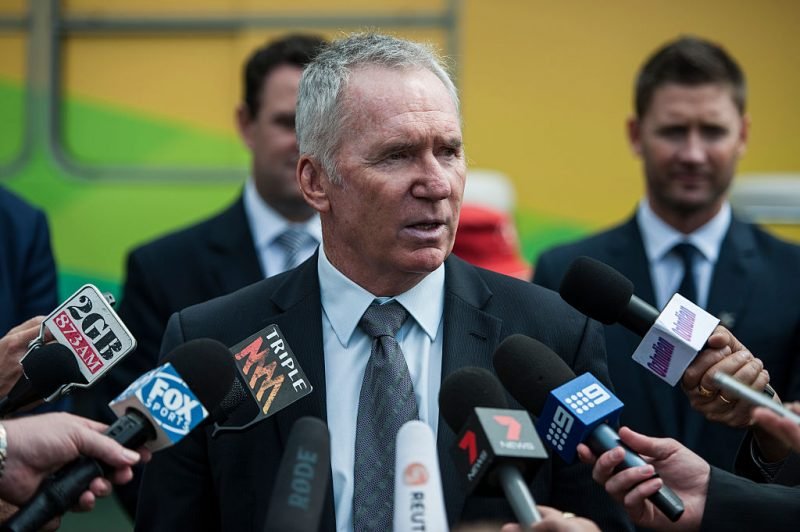 Adding insult to injury was former Australia captain Allan Border, speaking on Fox Sports. “I hope he’s lying on the table in there half dead,” said Border on the Fox Sports telecast. “Otherwise, as captain, I would not be happy. I don’t think I’ve ever seen that before. He’s obviously just got an upset stomach to some degree and he was probably trying to use the situation where David Warner had just been dismissed to race off the ground and go to the toilet.”

While Border’s criticism perhaps explains the opener’s consternation over what would seem quite a simple decision – and maybe explains why Paine was quite so gleeful in his retelling of his own bowel movement mishap – Renshaw was happy with the decision he chose. “This is one of the greats of the Australian cricket, he was captain, but I was just happy to get to the toilet,” he said. “I think if I’d stayed out there people might have had a go at me for staying out there.

“Whatever you do in life, people are going to have some opinions. At the end of the day I was pretty happy with my decision to get off that field because we might have been sitting talking about something else and maybe my sponsorship with a nappy brand.”

Related Story: The 2017 Steve Smith ‘brainfade’ – How a look to the dressing room sparked an almighty row

The story at least had a happy ending, with Renshaw returning later in the innings to complete a half-century in his first overseas Test innings. The left-hander’s 68 was Australia’s top score in their first innings, and laid the platform for one of their most famous away Test victories, with twin hauls of 6-26 by Steve O’Keefe and a third-innings century from Smith consigning India to only their third home Test defeat of the decade.