If the past is another country, then county cricket’s past, and maybe even its present, lives there. Social media – Twitter; the live streams of play etc – might have provided some sort of revitalising function but more than that, it has revealed how much the presence of county cricket means to its followers, even if the acceleration of the culture precludes most of them from actually going.

What is it about the county game that holds such romance? It’s the same kind of touchstone that you find maybe in lower league football or club rugby, something about a sense of time and place, a shared history, an ability to reach out and touch rather than be separated by a screen or cost or availability. Sport at the highest level has an isolating quality that can be as unwelcoming and unappealing to some as it is thrilling to others.

Paul Edwards would, I’d guess, know the feeling intimately. As George Dobell reveals in his introduction to this collection of Edwards’ journalism, he is a man “who once told me that, on Christmas Day, he likes to visit Lancashire League cricket grounds and savour the encounters long past”. He has only owned a mobile phone for a couple of years. He “cannot swim, drive or ride a bicycle”. He lives 600 yards from Southport and Birkdale CC’s Trafalgar Road ground, “and in winter,” Edwards writes, “I walk several circuits of the boundary almost every day and try to understand the place afresh”.

He is not a man in search of a scoop, either. He quotes from David Hare, Harry Altham, Simon & Garfunkel and Dad’s Army as his stories unwind. He is a follower of Arlott’s advice for cricket writers – “get to know the players” – but not necessarily in the obvious way.

Edwards understands them by watching them, and sees their lives and careers as Cardus advised, “against the backdrop of the years”. Collecting his journalism is like scooping up the county game in your arms – what you love about it is probably here, channelled through this most devoted of correspondents.

Aside from a selection of book reviews and a lovely run of offbeat player profiles, Summer Days Promise consists of match reports, some of entire games, others of odd days. They are selected for their writing rather than their significance as cricket matches, because, well, what makes a game significant? That is one of the questions this book poses.

Edwards’ first choice is ‘Shantry’s Match’, a game at New Road in September 2014 when Jack Shantry, a cricketer of huge heart and (comparatively) limited ability, plays the game of his life: absolute fodder for the county obsessive. As Edwards writes, “[it was] a match whose shape was as improbable as most in the history of cricket”, with the noble trier Shantry becoming the first player to take 10 wickets and contribute a century from No.9. “The disarmingly pleasant architect of one of his county’s most famous victories will be content to celebrate long and hard with his teammates.” 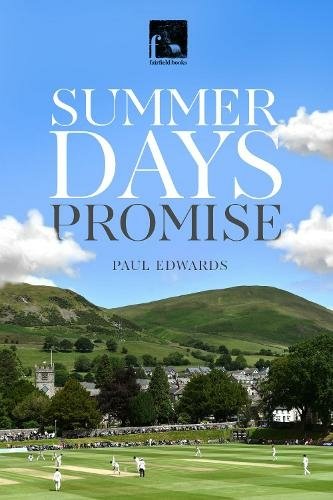 There is bounty to be had in simply hanging around. At Trafalgar Road in 2016, he sees Durham beat Lancashire: “They won the match, had a few drinks, then a few more, and regaled the Southport & Birkdale members with Blaydon Races, many, many verses of it, and then American Pie and I’m Gonna Be. On a golden evening when players made common cause with those who watched them, photographs were taken amid the rich choruses.” The Durham players then contest an impromptu game on the outfield with a couple of the junior players from Southport & Birkdale CC. Edwards concludes his report by repurposing some lines from Philip Larkin: ‘something people do/Not noticing time’s rolling smithy smoke/Shadows much greater gestures; something they share/That breaks ancestrally each year into/ Regenerate union. Let it always be there.’ This sense of the present disappearing quickly into the past, and the need to heed its fragility, is everywhere.

There are of course some very pleasing lines dotted throughout these meandering hills: Darren Stevens is “the vicar of Dibbly Dobbly”. After an unlikely century wins a game for Lancashire, “Dane Vilas plays shadow shots to the bowling of a ghost”. While watching David Warner in 2019, Edwards considers Mike Atherton’s point about opening batters having to put playing and missing to the back of their minds: “one wonders how large Warner’s mind would have to be to obey Atherton’s instruction.”

Paul Edwards is a writer who has found his place in a tradition he wants to preserve. In that respect, he may not push boundaries, but he lets a soft summer light fall on them, and there’s a deep pleasure to be had in reading him.