A batsman of the highest class and arguably Zimbabwe’s greatest ever cricketer, Andy Flower would’ve been an automatic choice as a keeper-batsman in almost every Test side of his time. In the Nagpur Test of 2000, he produced his best ever Test knock, showing supreme quality against spin to help his side avoid a 2-0 series sweep.

Sachin Tendulkar’s 201* and hundreds from Shiv Sunder Das and Rahul Dravid propelled India to a massive first-innings score of 609-6 declared. Grant, the younger Flower brother, scored an unbeaten hundred in response, but that wasn’t enough to avoid a follow-on.

Sourav Ganguly used each of his bowling options, barring the wicketkeeper, all to no avail as Zimbabwe batted out 161 overs. Flower finished the series with 540 runs while being dismissed just twice, the third highest aggregate in a two-match affair.

Better remembered for his explosive opening blitz in New Zealand’s impressive 1992 World Cup campaign, Mark Greatbatch had another dimension to his batting too. On a surface known for its pace and bounce, Greatbatch countered Australia’s strong pace battery, comprising of Terry Alderman, Geoff Lawson, Merv Hughes and Carl Rackemann to save New Zealand from a certain defeat.

After New Zealand lost both their openers for a combined 11 runs in their second innings, Greatbatch held strong at one end, consuming 485 deliveries in his 11-hour vigil. Jeff Crowe offered some support, but New Zealand were still well behind when he and Ian Smith fell to Hughes in successive balls.

Greatbatch however, remained undeterred, combining with an 18-year-old Chris Cairns and Martin Snedden to save the Test. He finished with an unbeaten 146, in an innings where no one else would cross 50.

A captain’s knock of the highest quality, brought about at a time when the team was in desperate need of inspiration. Here was a man under pressure, fresh from a defeat in the previous Test at Edgbaston where his decision at the toss raised eyebrows. With the bat, it had been a struggle. Memories of the Steve Harmison bouncer at Lord’s and Flintoff’s over for the ages in Birmingham were still afresh.

On the final day of the third Test with the series evenly poised at 1-1, the skipper walked in to bat with his side staring down the barrel, needing to bat out the day to escape with a draw. He batted for almost the entirety of the mixing assured defence with flamboyant strokeplay to lead his side’s match-saving effort.

His untimely dismissal in the game’s final hour brought in Glenn McGrath to join Brett Lee for the last four overs. The pair, inspired by the brilliance perhaps, battled it out, ensuring that the skipper’s heroic effort didn’t go in vain.

In 2014 came his peak. India had already been on the receiving end of a McCullum masterclass in the first Test at Eden Park, where he’d starred with a fluent 224 in a close win. In Wellington, the skipper produced a timeless marathon, which saved New Zealand from an almost certain defeat and helped them secure a first series win over India in 12 years.

New Zealand, after being skittled for 192 in their first innings were struggling at 95-5 in their second, still 151 behind India’s 438. At this stage, no one would’ve expected that MS Dhoni’s men would’ve to wait for another 123 overs for their next wicket. With BJ Watling, who himself scored a hundred, McCullum, contrary to his characteristically attacking approach, showed great discipline to counter India in a herculean effort.

Jesse Ryder’s 201 and hundreds from Ross Taylor and McCullum helped the hosts post a daunting 619-9 declared, and India, in their first innings couldn’t even manage half that. With more than two days left India’s challenge was clear, but monumental.

Gambhir, the man in form, anchored their innings to perfection, holding his end till the final session on day five. He was expertly supported by the big-three: Dravid (62), Tendulkar (64) and Laxman (124) to mount frustration for the hosts’ spin duo of skipper Daniel Vettori and Jeetan Patel. Gambhir’s innings lasted 643 minutes as India batted out 180 overs to save the Test. Another three-digit score in the third Test in Wellington completed India’s first series win in New Zealand since 1968.

As for the Indian opener, it was a start of a glorious run, which saw him score hundreds in five back-to-back Tests, during which, he also climbed to the top of Test Batting Rankings.

It was some occasion at Edgbaston as Test cricket returned to the Birmingham-based ground after a gap of 28 years.

England openers Peter Richardson and Brian Close took them to 63, which soon became 65-2 after Doug Insole was dismissed for a duck. At stumps on day 3, England were still 178 behind with Close and Peter May at the crease. Roy Gilchrist struck early on the fourth morning, denting England further. Enter skipper Colin Cowdrey. 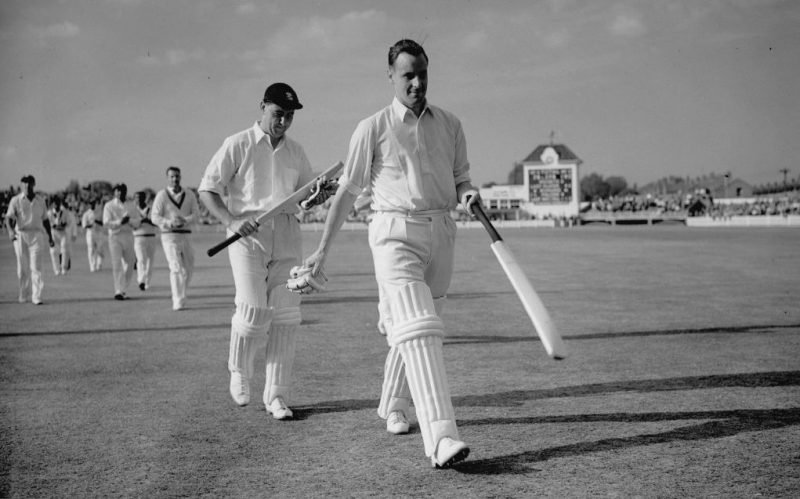 Peter May and Colin Cowdrey walk-off after a monumental effort

Windies weren’t given another chance to celebrate, as May and Cowdrey walked off unbeaten on 193 and 78 respectively at stumps with England 90 ahead.

Day five was no different, Cowdrey went into three figures while May went past 200. When Collie Smith finally sent back Cowdrey for 154 – an innings that lasted for exactly 500 minutes, the pair had already added 411, registering the then highest fourth wicket partnership in Test cricket. May eventually finished unbeaten at 285 as England declared at 583-4. Ramadhin bowled a whopping 98 overs for his two wickets, while Atkinson had no success in his 72.

The tide turned dramatically as the Windies were reduced to 27-4 and later 68-7, thanks to the Laker-Lock duo, but Windies skipper John Goddard helped his team salvage a draw. One of the great Tests.

An all-time classics. The Oval Test of 1979 saw India almost produce the unlikeliest of wins. The chief architect was of course, the man who defined their batting for a generation, Sunil Manohar Gavaskar.

Trailing 1-0 in the series, India were set a target of 438 runs in their fourth innings with five sessions to play. Gavaskar and his opening partner Chetan Chauhan added 76 by the end of the fourth day’s play. The final day turned out to be a fiercely gripping day of Test cricket. The openers saw India past 200, with Gavaskar getting t0 three figures. Chauhan departed for 80 but Dilip Vengsarkar (52) helped India maintain their ascendancy. At 366-1, India were outright favourites to better what had been achieved four years ago at the Port of Spain, with Gavaskar once again playing the lead.

However, a stunning collapse followed, with India losing their next seven wickets for 67, including that of Gavaskar – one of Ian Botham’s three scalps. The visitors eventually finished at 429-8, just nine runs shy of what would have been a record run-chase.

Grit, courage, application and concentration – Michael Atherton’s resilient effort at The Wanderers had all the ingredients of a classic Test-match saving knock. To many, it’s the best knock to ever save a Test match.

Chasing a mountainous target of 479 with more than five sessions to play, the England skipper batted the entirety of his team’s innings, facing the very first ball of the fourth innings and the last, to achieve what seemed impossible. All of that against the pace and hostility of an attack led by Allan Donald alongside Meyrick Pringle, Brian McMillan and a young Shaun Pollock.

Atherton finished on an unbeaten 185 as no one else crossed 44. That however, doesn’t tell the whole picture. With England five down with a good part of the final day’s play remaining and Jack Russell joined Atherton in a five and a half hour stand, contributing with a 235-ball 29*.

One of the best ever innings played on Test match debut. Faf du Plessis would have had to wait longer for his Test debut had JP Duminy not being ruled out with injury.

South Africa’s start in a run-chase of 430 was a disastrous one. Skipper Graeme Smith departed for a duck in the very first over. Hashim Amla, Alviro Petersen and Jacques Rudolph didn’t muster much between them, leaving the visitors reeling at 45-4. To add to their predicament, Jacques Kallis was battling with a hamstring strain. All this with 29 overs left on day four.

In walked du Plessis, joining AB de Villiers in one of the most fascinating blockathons in modern-day cricket. The latter took an uncharacteristically defensive approach, consuming 220 deliveries for his 33.

After de Villiers was dismissed on the final, Kallis, to South Africa’s relief, walked in to bat, extending Australia’s wait for another session. Du Plessis meanwhile, having spent an hour in the nineties, completed an epic hundred, an innings Michael Slater described as being, “full of courage and full of pride.” The hosts were hampered by an injury to James Pattinson, their premier quick, who couldn’t bowl for the entire fourth innings. After Nathan Lyon had Kallis undone by sharp bounce, Steyn hung in for a 28-ball duck, before Du Plessis and Morne Morkel hung in and ensured a draw.

As per CricViz, of the 172 balls Du Plessis faced from Nathan Lyon, 161 were dots.

The longest innings ever recorded in a Test match, Hanif Mohammad’s 337 is the most epic of all Test saving knocks. Pakistan conceded an extraordinary first innings deficit of 473, yet still leave the Test with a draw. The Kensington Oval however, was to witness one of game’s greatest escapes.

Pakistan began their second innings on just the third day of the game. Hanif, who’d scored two of Pakistan’s six Test hundreds at the time, stood tall against to defy the pace of Roy Gilchrist, the chief tormentor in the first innings, and the spin of Collie Smith and Alf Valentine for a staggering 16 hours and 10 minutes.

Hanif Mohammad holds the record for the longest Test innings, at 16 hours and 10 minutes, and was once run out going for the run that would have brought him first-class cricket’s first 500.

His opening partner Imtiaz Ahmed was the major contributor in an opening stand of 152 with 91, while Saeed Ahmed scored 65. Pakistan batted for a whopping 319 overs. Hanif, immovable and solid guided the ship before he was eventually caught behind off Eric Atkinson for 337 – the then second highest individual score in Test cricket.

Pakistan managed to earn the most unlikeliest of draws and Hanif, as reported in the 2017 Wisden Almanack, slept all night in his kit.