The stats that show what a stunning talent Rishabh Pant is – and why he should be in India’s T20 team.

An Indian batting order in T20 cricket of Shikhar Dhawan, Lokesh Rahul (who should be a guaranteed starter), Virat Kohli, Rohit Sharma, MS Dhoni, Krunal Pandya (who lends greater balance than Manish Pandey or Suresh Raina) and Hardik Pandya is a frightening prospect. However, it could and should, be even stronger if it included the 20 year-old pocket-rocket left-hander, Rishbah Pant.

While India were playing two T20s against Ireland in Malahide last week, Pant was playing for India A in a 50-over tri-series with England Lions and West Indies A. Admittedly, the Indian management may well have considered the tri-series – where he could work closely with coach Rahul David – more beneficial for Pant’s development than a stint in the unforgiving T20 format at international level, but with the tri-series finishing the day before India’s three-match series with England there was scope for him to play in both. By all objective measures Pant should be playing for India in T20 cricket – not only is he one of the best T20 batsmen in India; he is arguably one of the best T20 batsman in the world. Since the start of 2017 IPL the only batsmen to have played more than 25 innings with a higher average Batting Impact than Pant’s +5.4 runs per match are Luke Ronchi, Evin Lewis, AB de Villiers, Colin Munro and Alex Hales. 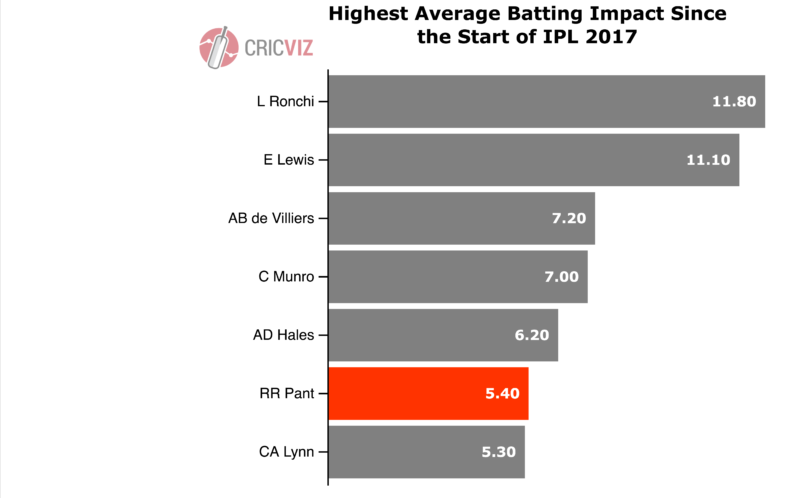 Pant, a short and stocky left-hander who can also keep wicket, was an academy member at Delhi during his teens and caught the eye at the 2016 Under-19 World Cup where he scored an 18-ball fifty and a century. His form earned him an IPL contract in 2016 with Delhi Daredevils worth Rs 1.9 crore – up from a base price of Rs 10 lakh. Pant is rare among Indian batsmen in that he combines batting brilliance with raw muscular power – enabling him to clear the ropes even when he fails to make a clean connection. Although India has produced many great batsmen it has not produced many great power-hitters – MS Dhoni, Virender Sehwag, Yuvraj Singh and perhaps Rohit Sharma are the only four who have mastered the art – but in Pant they have a hitter who could supersede them all. It was in the 2016/17 Ranji Trophy that Pant’s talent became apparent in astonishing season in which he brought power-hitting into the red-ball format in an unprecedented manner. Across 12 innings Pant scored 972 runs at run rate of 6.43 runs per over, hitting 49 sixes and scoring four hundreds – one of which was a triple century and another of which came off just 48 balls.

After that stunning Ranji Trophy season expectations of Pant have been high and he has not disappointed. 366 runs at 9.93 runs per over in the 2017 IPL season, including a breakthrough innings of 97 off 43 balls in a blistering run-chase of 209, led to him being retained by Delhi Daredevils for Rs 8 crores and won him a handful of international caps while senior players were being rested. This January Pant scored the second fastest century in T20 history off just 32 balls for Delhi in the Syed Mushtaq Ali Trophy before soaring to new heights in the 2018 IPL, plundering 684 runs at 10.41 runs per over in a struggling Delhi team. His 128 not out off 63 balls against the strong Sunrisers Hyderabad bowling attack is one of the greatest IPL innings and included a dismantling of the league’s best death bowler, Bhuvneshwar Kumar. Pant’s average Batting Impact in the 2018 IPL of +11.40 runs per match is the ninth highest ever in an IPL season and the third highest by an Indian. Incidentally, Rahul’s 2018 season was even better. 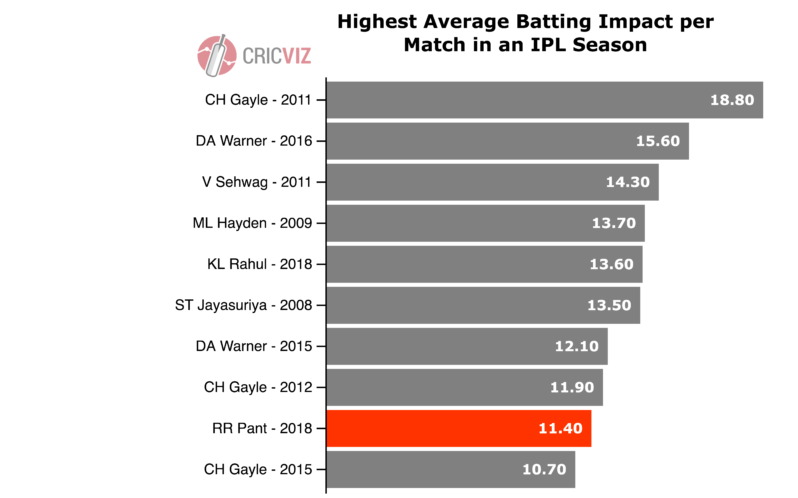 It is tempting to label Pant as one of a new breed of Indian batsmen who play without fear and attack furiously, but in reality Pant is out on his own as a player of unrivalled attacking intent. Among India’s current T20 batting options the only player close to Pant’s attacking shot percentage is Pant’s former Under-19 captain Ishan Kishan. Pant is operating on a different level not only to the orthodox players such as Kohli and Rohit but to the aggressive hitters such as Dhoni and Shaw as well. 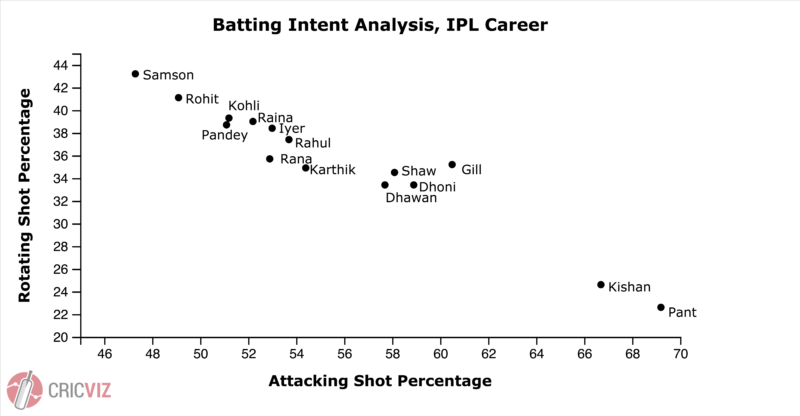 Pant’s high attacking shot percentage is largely a product of the enlightened era of attacking batting that he belongs to but it is also a consequence of his remarkable range of shots. Pant combines brutal power in conventional scoring areas down the ground with punchy square drives, fiery pulls and cheeky ramps & scoops. He is arguably only the second truly 360 degree player to emerge from India after Dinesh Karthik who has barely half the power. 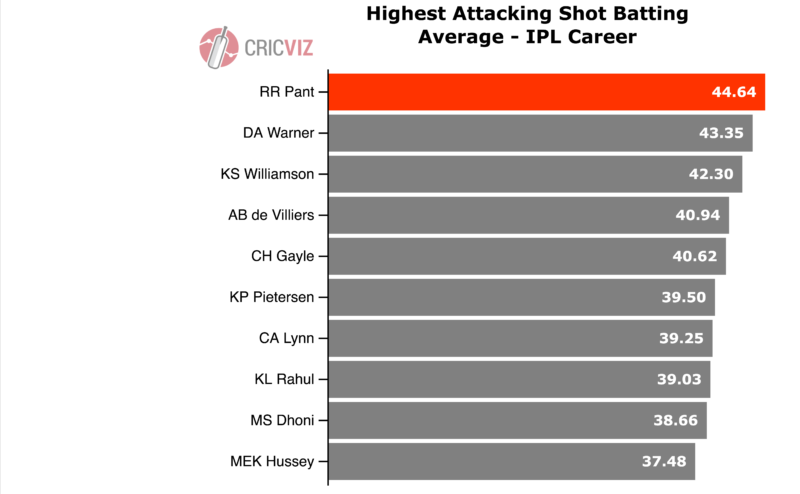 These are early days in Pant’s career – he is only 20 years-old and has played just 55 T20s – only three of them outside India, but he has it all: power, poise, range – and no apparent weakness against any bowler-type. Although he has only performed in the IPL he has dominant head-to-head records against elite international bowlers, including Rashid Khan and Sunil Narine – whom he appeared to read from the hand. Of course, he is likely encounter challenges and setbacks in the coming years – for instance there are signs he could struggle against the short ball and questions have been asked of his fitness and running between the wickets – but there can be no doubt that has the ability to counter them. Make no mistake, Rishabh Pant is a freak of a talent.

Freddie Wilde is an analyst at CricViz, the cricket intelligence specialists