The year 2019 has been a topsy-turvy one for KL Rahul but he is ending it having proved that he deserves to be among the very best, explains Akshay Gopalakrishnan.

It began with a suspension, imposed on him for ill-advised comments made on a television talk show, as a result of which he missed the limited-overs tour of New Zealand in January-February.

He subsequently returned for the home T20Is against Australia, and finished as India’s highest run-scorer in the two-match series, before going on to have a smashing run in the 2019 IPL, where he was the tournament’s second-highest scorer.

"And just like that, something ticked, and Kohli came into his own. It wasn’t a gradual process of working himself back into rhythm – there wasn’t any time for that. It was abrupt and sudden." | @RD_Wisden https://t.co/4flJD73Y9u

Thereafter, he was asked to fill the highly contentious No.4 spot in India’s ODI XI at the World Cup, but after just one outing from that position, he was bumped up to open the innings, following an untimely injury to Shikhar Dhawan. He made the most of the opportunity to hit a hundred and two fifties, as he finished as India’s third-highest run-scorer, behind their two star batsmen, Rohit Sharma and Virat Kohli.

But after a middling tour of the Caribbean, where he struggled with a modified technique against the red ball, returning with 101 runs from four innings, things went downhill. Following the tour, Rahul’s long rope as Test match opener ended, as India heeded to popular opinion and conferred that honour upon Rohit.

Rahul briefly returned for the T20Is against Bangladesh and struck a 35-ball 52 in the series-decider in Nagpur, but his tally of 75 runs from three outings was nothing to sit up and take note of. 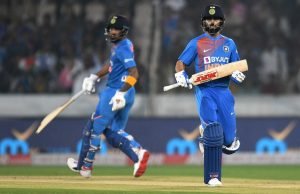 The confidence gained from those exploits was visible on Friday, December 6, as he set up India’s highest successful chase in the series opener against West Indies in Hyderabad. Benefitting from another injury to Dhawan, Rahul, once again promoted to open the batting alongside Rohit, reeled off 62 off 40 balls to help India run down 207 with eight balls to spare. “Playing Syed Mushtaq Ali Trophy helped a lot,” he said after the game. “Doesn’t matter how many hours you spend in the nets, winning games gives me the most confidence. I did that with Karnataka, and I’m happy to do it with India. It’s good that I can carry my confidence across tournaments.”

Related Story: ‘Lucky to get a recall based on IPL’ – Manjrekar questions KL Rahul’s inclusion in Test squad

Rahul was at his sublime best on Friday, unfurling a series of boundaries to set the early tone for India’s chase. With West Indies power-hitting their way to 207-5, this essentially came down to which team could hit the most boundaries, and India were already behind in that game, having lost their biggest six-hitter in Rohit Sharma for just 8.

"It’s good that I can carry my confidence across tournaments."

Moreover, their other big match-winner, Kohli, was struggling early on. That is such a rare occurrence that it almost feels like a hyperbole. And yet, it’s true that India’s captain played two vastly different innings en route to his unbeaten 94.

Kohli was, at different stages on Friday, on 3 off eight balls, 20 off 20 (at a time when the required rate was pushing towards 12), and 26 off 25. It was a passage replete with edged fours, mistimed heaves, and a control percentage of just over 75.

That India did not slip to a point of no return through this passage was down to Rahul. His steady stream of boundaries kept West Indies on their toes and India in the hunt. And they began flowing from the outset. Off the third ball he faced, Rahul pounced on the width offered by Jason Holder to lay into a ferocious cut through point, opening a sequence of three boundaries in four balls.

As was the case when India bowled, West Indies’ pacers pitched short, albeit with a lot more pace, carry and venom. Of all of India’s top-order batsmen in the Powerplay, Rahul appeared to be the least fazed by this delivery. Holder was dispatched with imperious cuts for 13 runs in the second over, Sheldon Cottrell’s short ball flew off the top edge over fine leg for six, while Kesrick Williams was ferociously cut past point again. In between all this, Khary Pierre, the left-arm spinning allrounder, and Hayden Walsh, the American-born legspinner, tried going fuller, and Rahul responded in kind, with a slog sweep over square leg, and a deft steer past third man.

Rahul’s constant willingness to attack, and the crispness of his strokes, showed a man who was in a comfortable space. His footwork was assured, his head was steady, his decision-making clear, and his balance top-notch. Rahul also seemed to suss out lines and lengths early enough to settle into his strokes. These traits are a far cry from the man who toured the West Indies, where Rahul was constantly grappling between playing at and leaving the ball. Even as West Indies’ bowlers hit tight lines and intelligently varied their speeds in the early parts of India’s innings, Rahul came away with a control percentage of over 80. 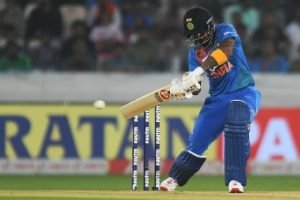 “Everyone likes me when I score runs. In T20Is, I honestly don’t plan my innings according to strike-rate, especially batting second,” he said, explaining what was going on in his mind. “It depends more on the target. The first few balls, I’d still like to make use of the wicket. It’s important to lay a solid foundation as an opener, because there are power hitters in the back end. I want to do better in the next couple of games.”

By the time Rahul got to his fifty on Friday, Kohli had begun to rediscover his touch, as the hard wafts and thick edges made way for more precise strokes, laced with exquisite timing. Once he was dismissed, Kohli transcended into a whole other level, as he smashed 74 runs off his last 30 balls.

At the post-match presentation, the captain explained why it’s important for one of him or Rohit to play a long innings. But if Friday was any evidence, there is no reason why Rahul shouldn’t be a part of that discussion. On the day he became the third-fastest batsman to a thousand T20I runs, taking two innings more than his captain did, Rahul may have just taken the first, baby steps in a long, but much-awaited road back to becoming an all-format star.