Defending world champions Australia have now lost 14 of their last 16 completed ODI matches and have slid to a 34-year low of sixth in the ICC Rankings. Admittedly, their most recent series against England – with five of their first choice starting XI absent through injury or suspension (David Warner, Steve Smith, Mitchell Starc, Pat Cummins and Josh Hazlewood) – is not an accurate representation of their true strength. However, a win percentage of 47% since the 2015 World Cup, worse than every team in the 2019 World Cup except Sri Lanka and the Windies, suggests a team with more deep-rooted problems. 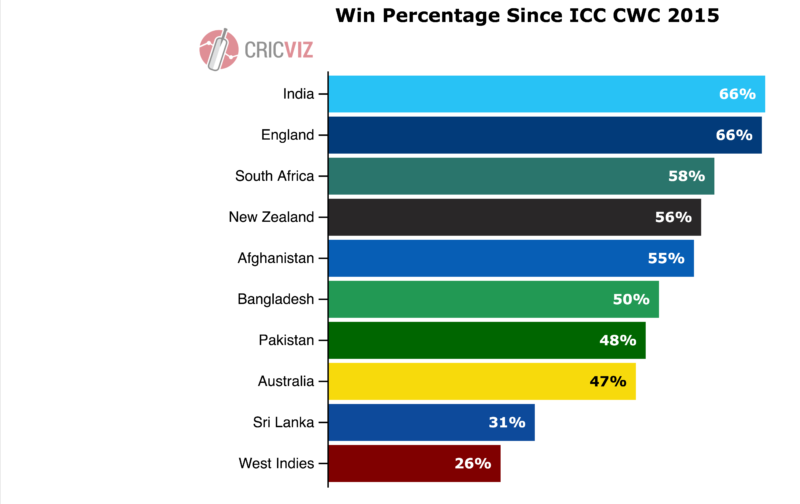 Analysis of CricViz Match Impact – a performance evaluation tool for limited-overs cricket which measures players against an average level of performance – underlines the severity of Australia’s problems. Among the teams competing in next year’s World Cup Australia are ranked in the bottom half in nine out of 12 metrics. Match Impact shows that Australia’s batting in all areas, but particularly against spin, is their biggest concern while their strong pace bowling has been significantly undermined by their very weak spin bowling.

After Australia’s 2015 World Cup triumph four central members of their squad retired: captain Michael Clarke, all-rounder Shane Watson, wicketkeeper Brad Haddin and attack leader Mitchell Johnson. James Faulkner – who leant precious balance to the team – also struggled for form and was dropped in October last year. Losing five key players would be problematic for any team and these issues have been complicated by injuries and more recently suspensions, however Australia’s disjointed thinking on selection and strategy has only compounded the problems. 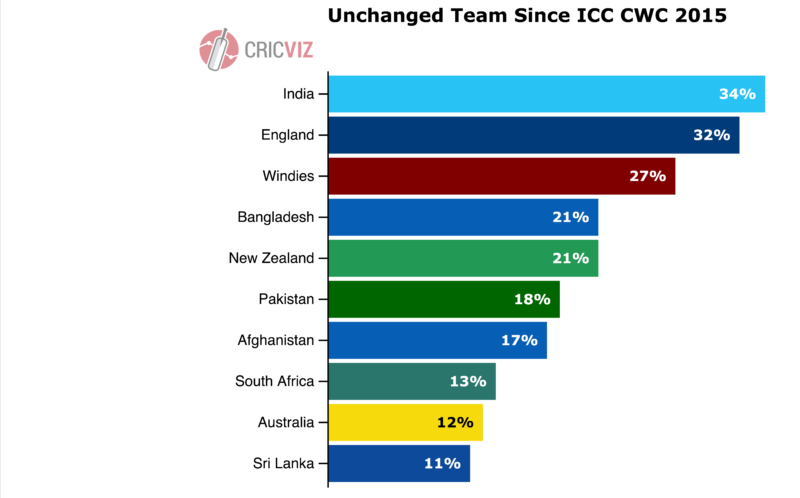 The recent change of head coach offers Australia a chance to start afresh but with less than a year until they mount their World Cup defence they need to quickly settle on a structure and a strategy and stick with it as best they can. In the meantime – although planning is complicated by so many absent players – ideally those that are available will be fulfilling the roles that they might assume in the World Cup.

The appointment of Tim Paine as ODI captain in the immediate aftermath of the ball-tampering saga was understandable with Australia leaderless, but now with Australia winless and the batting representing their biggest weakness it increasingly looks as if they cannot afford to carry a wicket-keeper whose batting credentials in limited-overs cricket are highly questionable. Handing the captaincy responsibilities to Finch, who is already the T20 captain, is a natural step and would allow Australia to replace Paine with Alex Carey – who although inexperienced is the most prolific keeper-batsman in domestic one-day cricket in Australia.

Related Story: When Finch asked the umpire for advice on how to bowl to Kohli and Rohit

Where Finch bats in the order is an important decision which the management need to make sooner rather than later to afford other batsmen a fair opportunity to make a claim for alternative positions. Batting Finch in the middle order was motivated by a desire to improve Australia’s batting against spin, which has been very poor since the last World Cup – however, although Finch has a strong record against spin in T20s his record against spin in ODIs is not so good. In his List A career Finch averages 40 opening the batting and 30 when not opening the batting. 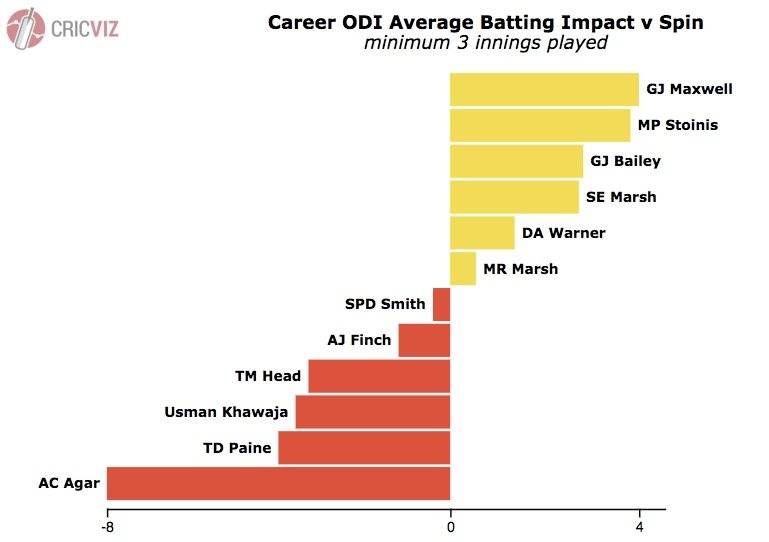 When Smith is available he will slot back into the middle order and although Maxwell’s inconsistency is frustrating he is without doubt one of Australia’s most valuable players and must be persisted with. That leaves two vacant spots in the batting order being competed for by a group of batsmen and all-rounders: Shaun Marsh, Travis Head, Usman Khawaja, Marcus Stoinis, D’Arcy Short, Mitchell Marsh, Ashton Agar and forgotten men Chris Lynn and George Bailey. Of the all-rounders Stoinis appears to be the strongest batsman and Marsh the strongest bowler. Of the batsmen Shaun Marsh is the outstanding candidate but Bailey’s excellent game against spin and Lynn’s destructive power are left-field alternatives. Lynn – having played just one ODI and 40 List A matches in his career and battling major injury problems would represent a significant risk, but the upsides could be huge. 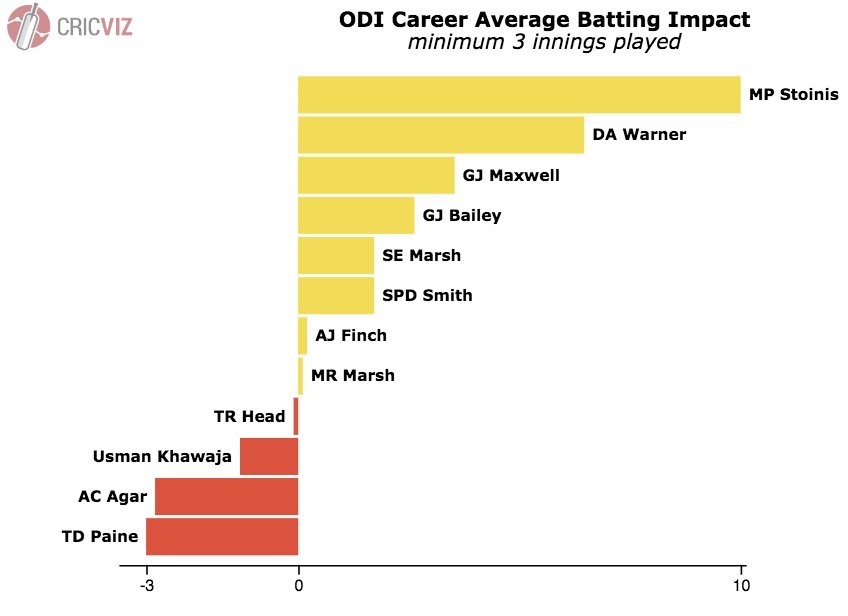 The key question surrounding the bowling regards the spinner and what kind of role they want their spinner to fulfil. Leg-spinner Adam Zampa would be an attacking option, but Zampa was dropped in January after series against India and England in which he failed to make up for his high economy-rate with a low strike-rate. In Australia’s recent ODI series against England when they have been using their second-string pace attack and Agar as the spinner – their lack of an attacking spinner has left their bowling attack looking one-dimensional. However alongside Australia’s first-choice pace attack, Agar – who offers control but not such a wicket-taking threat – could perform an effective holding role. Nathan Lyon could provide the best of both worlds and should be afforded an opportunity to prove his worth. Given the strength of their pace attack Australia could also consider playing four frontline quicks and utilising the part-time spin of Maxwell and Head. 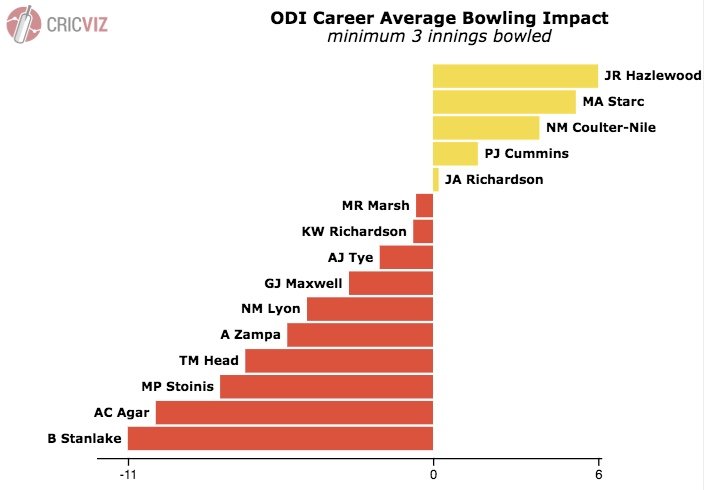 There should be no doubt that Starc and Hazlewood are Australia’s first-choice pace bowlers while Cummins and Coulter-Nile – if fit, should fight for the third spot. Billy Stanlake’s height, Jhye Richardson’s pace, Kane Richardson’s yorkers and AJ Tye’s slower balls offer Australia varied back-up options. The next year will provide plenty of opportunities to test them and the spinners.

With less than a year until the start of the 2019 World Cup Australia’s ODI team is in a bad place but it is telling that they remain third favourites to win the tournament according to the bookmakers. Australia are facing some difficult questions but if they answer them in the right way they could conceivably be title contenders again in a year’s time.

Freddie Wilde is an analyst at CricViz, cricket intelligence specialists