Pant v Iyer v Samson: who’s the best – and why?

In recent years, the Indian white-ball side has been blessed with some of the most outrageously skilled batsmen in world cricket. Virat Kohli, Rohit Sharma and Shikhar Dhawan form a phenomenal top three, and a rotating cast of top-class players make up the middle-order, the likes of Manish Pandey, Ajinkya Rahane and Hardik Pandya scrapping to be the best of an excellent bunch. This alone is enough to make India among the favourites for any limited-overs, including next year’s World Cup in England.

Yet terrifyingly for fans of other countries, there is another pool of talent just below that age-group. The cream of that generation born between 1995 and 1998 are a trio of very different, but equally thrilling batsmen – Rishabh Pant, Shreyas Iyer and Sanju Samson.

Pant is a firework of a cricketer. Whilst most Indian batsmen play as if they’ve been cradling a batting manual through adolescence, Pant bats with unorthodox charisma, as if he has a personal grudge against not just the bowler, but the very concept of bowling itself. Of this leading trio, he is the most straightforwardly attacking player, averaging 70 per cent attacking shots (well above the IPL standard of 50 per cent). There is already a compelling argument that he is the most powerful Indian batsman of all time, and it shows in his numbers, scoring at over 13rpo when hitting seamers through leg. He’s a phenomenon-in-waiting. 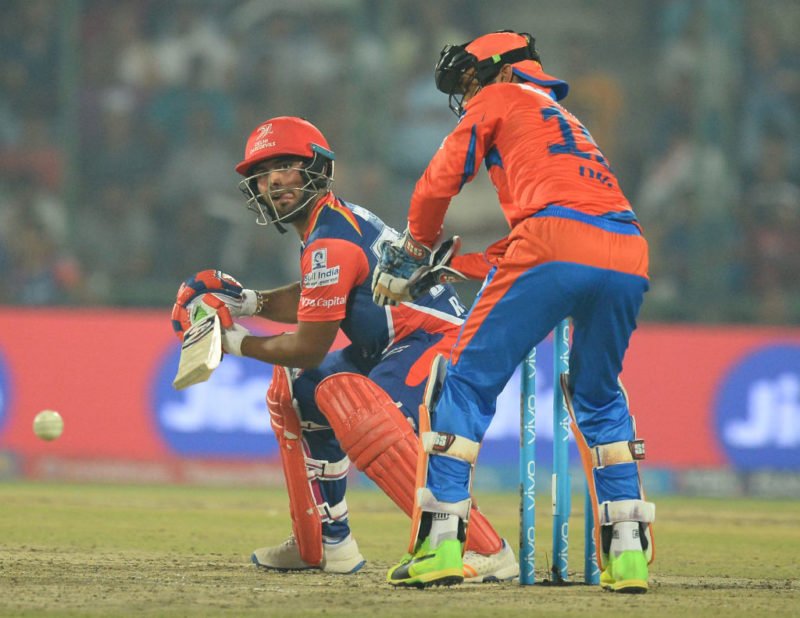 Pant (above) is 20, which Sanju Samson and Shreyas Iyer are 23

By comparison, Samson is a classical and orthodox player, averaging just 46.6 per cent attacking strokes and rotating considerably more – but the Rajasthan Royals man is no less exciting to watch. A classy touch player, he most closely resembles Rohit Sharma, but with quicker hands and more relaxed set-up, enabling him to whip through the line against short deliveries and score at 14.13rpo when playing the pull. His unbeaten 92 against Royal Challengers Bangalore was the template for what he’ll want going forward – and was the first truly outstanding innings of the tournament.

Whilst Pant and Samson have made considerable impressions already this season, it’s Shreyas Iyer who has had the most eventful year. After Gautam Gambhir’s resignation as Delhi Daredevils captain made Iyer captain, he found himself the youngest IPL captain in history. As a batsman, he stands tall in his crease, giving him access to both sides of the ground, though he is only slightly more aggressive than the average, playing 53.6 per cent attacking shots across his short career.

Each is a marvellous prospect, but who’s best? In an effort to determine the answer, we’ve used CricViz data to assess their merits in three categories: power, flexibility, and impact.

Regardless of the ECB’s current plans, T20 is still cricket’s shortest format – and power is essential. The ability to score rapidly when attacking is a fundamental of T20 batting, and all of our trio of young Indians exceed the average scoring rate for attacking shots (10.02rpo over the last 12 months). Among them, it’s Pant who scores the quickest when hitting out. 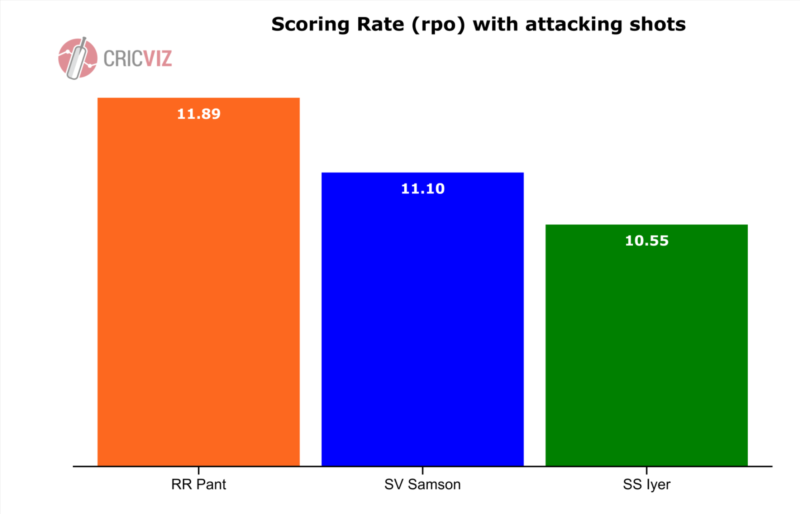 We can also see that this isn’t through good fortune – the Daredevils left-hander averages the most when attacking, proving that whilst he is rarely hitting from a stable base, Pant’s aggression carries no greater risk than that of his contemporaries. 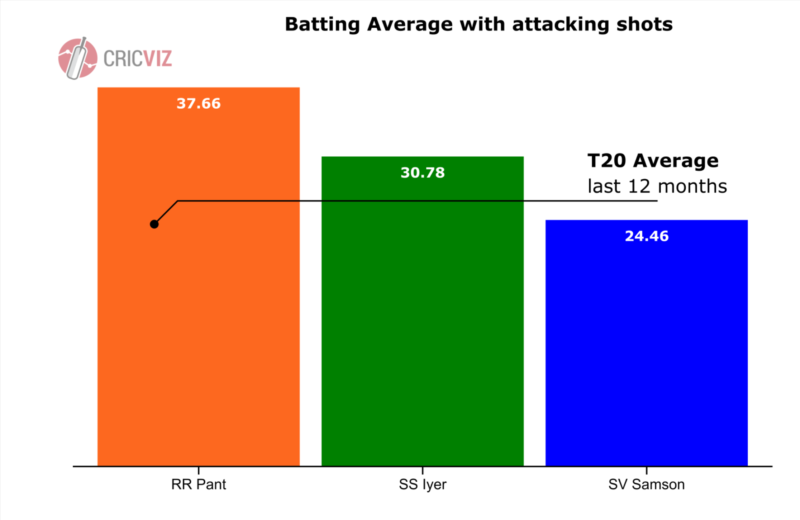 Pant may be the boss when it comes to general attacking, but when it comes to that most derided of shots – the slog – it’s the more classical Samson who surprisingly scores the quickest. He manages to rattle along at 16.34rpo when playing the stroke, faster than both Iyer and Pant, though he averages just 11.28, the lowest of the three. In this sense, it’s difficult to

assess Samson’s power-game. As shown by his low average with the most attacking shots, he’s not at his most effective when playing on the limits of his game, but he is capable of scoring quickly with a high level, should the situation dictate that it’s necessary.

Now, raw power ​is​ key for T20 batting, but in a world of data-analysis and strategic match-ups, being flexible and difficult to tie down is just as important. As an opposition captain, the man who would cause you the most bother in terms of manipulating the field would undoubtedly be Iyer. Of all our players, the Delhi skipper scores the largest proportion of his runs behind square, 39 per cent through that region compared to 34 per cent for Pant and 32 per cent for Samson. Typically, only 33 per cent of T20 runs are scored behind square, but Iyer’s inventive, wristier batting allows him to outstrip the average. Pleasingly, Iyer also scores exactly 50 per cent of his runs on the off-side and the leg-side. Through the sustained sample size of his career, Iyer has shown that he can score all around the ground, which forms a favourable contrast to Samson and Pant.

Iyer’s flexibility isn’t just limited to the areas in which he scores, but also the rate at which he scores through them. Whilst Pant’s scoring rate does exceed the others in all zones bar point/third man, Iyer maintains a solid scoring rate all around the field. He may not have the leg-side power of Pant, but Iyer’s ability to score at over 9rpo through both mid-wicket and third-man, areas where he scores 63 per cent of his runs, makes him a nightmare for opposition captains. Samson really does struggle by comparison with this metric, scoring rapidly through those same zones which Iyer dominates, but the Rajasthan man falls down through the covers, his scoring rate of 6.26rpo through such a traditionally prolific zone a glaring weakness.

Equally, Iyer is the only one of this crop to average more and score more quickly against spin. This is double-edged given his nationality – the IPL actually has less spin than the other major T20 competitions, other than BBL and the Blast – but equally, the ability to go against the grain and plunder the generally more economical bowling type of spin is surely a good thing.

CricViz’s Batting Impact system is a tool for evaluating performance with the bat in T20 cricket. Batting Impact measures the impact each player’s performance has had on the match score, and Average Batting Impact is the career average for any given player. Performances are measured ball-by-ball using a model of T20 cricket which prescribes a positive or negative run value based on whether the actions of the batsman, bowler and fielder have increased or decreased the expected total.

Using this measure, we can get an assessment of the effect our trio have had in their careers so far, and the influence they exert when they play. This season, the most impactful of the lot has been Pant. 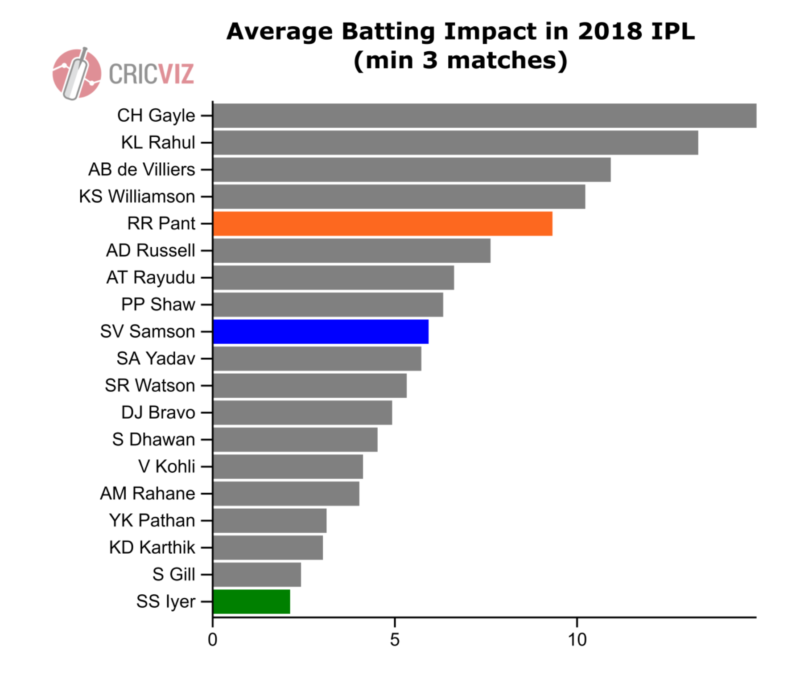 In a difficult season for Delhi, Pant has stood up and been their most influential batsman, albeit whilst being able to translate this into victories. This considerable influence isn’t simply a recent element of Pant’s game; he also has the highest career impact of our trio. 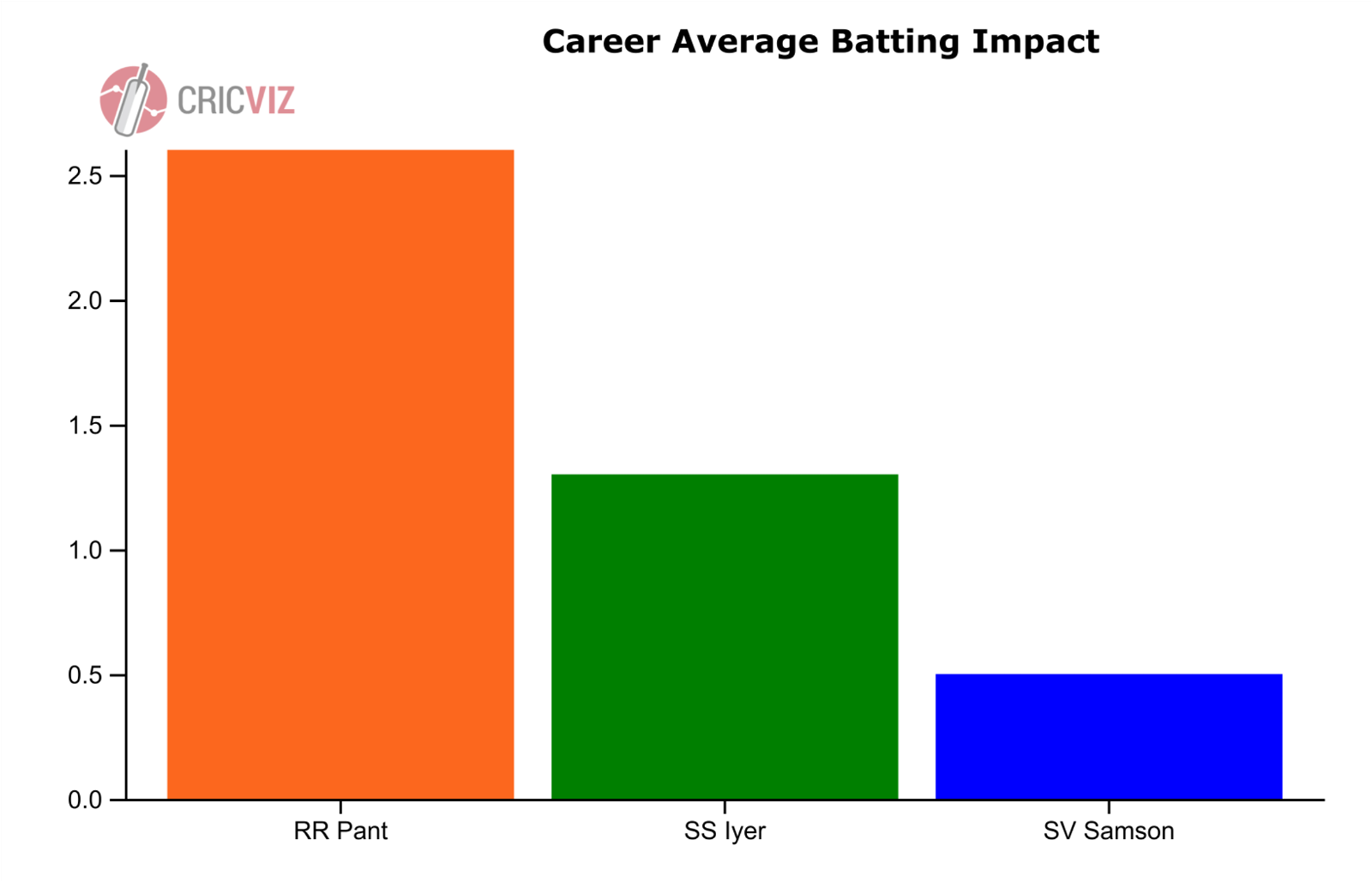 However, deeper context is also key when using this metric. Pant may have consistently been increasing Delhi’s totals, but it hasn’t led to them winning many games. By contrast, the highest impact for any innings played by our trio this season is Iyer’s 93* against KKR, the first game after he was installed as captain, and lifted Delhi’s total by 20.9 runs according to the Impact Index. They won that match, a high-stakes occasion for a number of reasons. Sometimes, analytics can be used to quantify intangibles, and given the context for Iyer and his team, the effect of that knock was both statistically and emotionally staggering.

Whilst each of them is a special player, it’s inescapable that Rishabh Pant is a level above both Samson and Iyer. However, it’s also fair to reflect on the idea they each represent respective eras in T20 batting.

Samson, classily manipulating the field, represents the best of T20 over the past decade, showcasing considerable red-ball-style intelligence, and will most likely have the most substantial all-format international career of this generation of Indians.

Iyer, inventive but with a solid technical base, represents the best of T20 today. His game is undoubtedly better suited to the shorter format, but he retains enough flexibility and variety to excel in a variety of conditions.

Then there’s Pant, all ball-striking and unorthodoxy, and a glimpse into T20’s future. As the game evolves more and more towards the thrilling brutality of power-hitting, a greater number of players will come to resemble Pant, maybe not hitting 360 but scoring at a strike-rate somewhere near that. He’s the best of the lot, and arguably the best in the world in his age-group, but it’s the sense that he’s a man ahead of his time which makes him stand out most of all.