As his country’s new head coach and chief selector, Misbah-ul-Haq has a chance to remake Pakistani cricket in his own image, writes Wisden Cricket Monthly columnist Jonathan Liew

After this appointment, there is no hope,” declared one Pakistani Twitter user on learning of the appointment. “RIP Pakistan cricket,” wrote another. “No hundred in his whole ODI career,” observed a third. Yes, Misbah-ul-Haq is back, and, as if for old times’ sake, the news of his appointment as Pakistan’s new head coach and chief selector has been afforded the sort of lukewarm reception that appears to follow him around like the weather.

It was the writer Omar Kureishi who described the default state of Pakistanis as “content in their discontent”. Yet even by the standards of a country where cricket is only marginally the most popular sport – just ahead of moaning about cricket – Misbah’s ability to divide opinion still catches the eye. 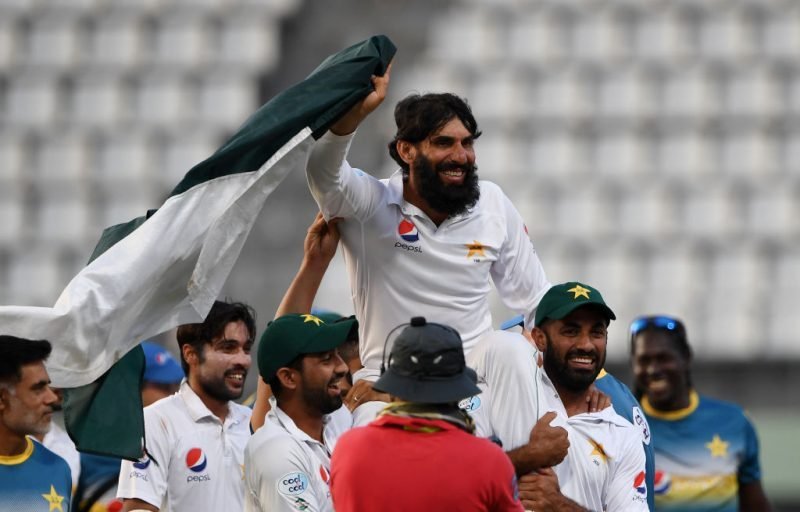 “Misbah is the guy you tell your secrets”

Here is, after all, one of the country’s most successful captains in history, a man who achieved the impossible. Salvaging the reputation of Pakistan cricket after the 2010 spot-fixing scandal. Uniting the various factions within the side. Leading the team to No.1 in the Test world rankings. Elevating his own batting to deific heights, despite never really appearing to play a shot at all. All without the benefits of home advantage, and at an age when most batsmen make a quiet pact with themselves to stop running threes.

Still, it wouldn’t be Pakistani cricket without at least a little palace intrigue. And certainly nobody could accuse the PCB of a lack of boldness in awarding unprecedented powers to a man with virtually no coaching experience, who didn’t even initially apply for the job, and who sat on the panel that decided to sack his predecessor Mickey Arthur. It’s even rumoured that Misbah will be allowed to coach a team in the Pakistan Super League on the side, a potential conflict of interest that has proved controversial in the past.

And so, before Misbah has so much as got his feet under the desk, the knives are already out. “Misbah has no high-level coaching skills,” complained Javed Miandad. “If they wanted to benefit from his expertise, first he should have been appointed as assistant coach, to learn.”

"Now here comes Misbah, promising hard work, accountability and – if local media reports are to be believed – a ban on biryanis"

But then, this is the magnetic gift of Misbah, a man who in his every word and deed exudes that rarest of commodities: natural competence. In a world where it occasionally seems like nobody really knows what they’re doing, Misbah stands out by looking like he knows exactly what he’s doing, even if – by his own admission – he doesn’t. It is the story of how a man with seemingly zero personal ambition ascended from tape-ball cricket to regional cricket to international cricket to international captaincy to one of the most powerful jobs in the sport. Misbah is the guy you trust to look after your phone when you go out to bat. Misbah is the guy you ask for relationship advice. Misbah is the guy you tell your secrets.

That inscrutable mask, now forested in a greying beard, conceals a strict, almost ruthless pragmatism. And perhaps the most intriguing part of Misbah’s rise is the way he stands in almost direct opposition to many of the traits Pakistanis like to see in themselves. A pillar of ice in a land of fire. A voice of calm in a 24-hour tumult. Wisdom offered, but never flaunted. Or as the writer Hassan Cheema puts it, “a rational man in an irrational place”. Pressure? Misbah eats pressure for breakfast, albeit only in strictly circumscribed portions, and as part of a balanced, high protein, low pressure diet.

Related Story: Grant Flower: Younis Khan held a knife to my throat when I tried to give him batting advice

Perhaps this is why he still struggles to earn his due among many Pakistanis. In a country that likes to see its cricketers as avatars for themselves, there has always been a certain cool detachment to Misbah, the educated aloofness that has so often been mistaken for condescension. Imran offered daredevil suaveness and feats of wonder. Afridi offered hedonism, pyrotechnics and brazen honesty. Now here comes Misbah, promising hard work, accountability and – if local media reports are to be believed – a ban on biryanis. It’s hard not to notice the contrast.

And yet, with a little luck and a little support, this could be a journey worth following. This winter’s tour of Australia may be a little soon for a side in transition, but next summer’s trip to England – who haven’t beaten Pakistan in four series – could be a good deal closer than people think. Misbah has made a career out of outperforming expectations. And over the next few years he has an unmistakable opportunity to remake Pakistani cricket in his own grizzled, chiselled image.