Ben Gardner on a regrettable but revealing Twitter interaction that has ballooned into much more.

So here we are then. In another world, we could be deconstructing an enthralling, just-concluded Test match and gearing up for a decider. Instead, a baffling two-dayer is receding into the distance, and, rather than the focus switching to a hotly contested ODI series being played in New Zealand, stealing the spotlight is a series of tweets, 280-character missives spun into days worth of news fodder. Such is the modern way.

Let’s address the tweets in question first. Alex Hartley, a World Cup winner who last played for England almost two years ago, joked, during the third innings of the third Test in India, with England behind in the game but not yet out of it, that it was “Nice of the England boys to get this test match finished just before England Women play tonight” followed by a series of clap emojis, and a suggestion to watch the match on BT Sport, her current employers.

A series of England cricketers, past and present, took umbrage at a perceived slight. “Very disappointing attitude considering all the ‘boys’ do to support the women’s game,” said Rory Burns, in a swiftly pulled-down tweet, though not so swiftly that Ben Stokes and James Anderson didn’t have time to like it first. 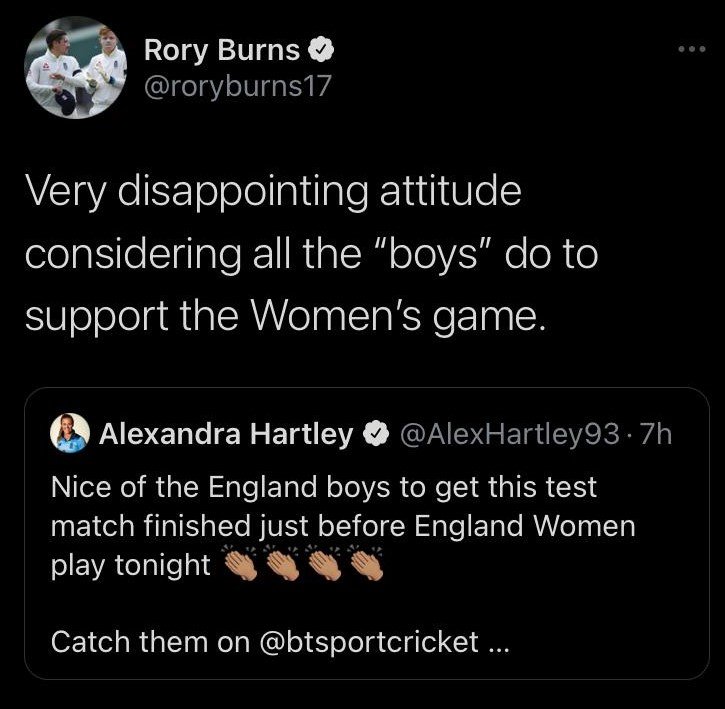 Ben Duckett, who hasn’t played for England since 2019, also chimed in. “Average tweet,” he replied. “Don’t think any of the men’s team would have been ‘clap emoji clap emoji clap emoji’ if the women lost.” That tweet is still live, as are a string of replies from Samit Patel – last England cap, 2015 – including one stating: “I also think it’s not banter either. In my opinion very disrespectful towards the boys.”

A later reply from Patel, asking “Why are we going to tweet on the women’s game for?” made you wonder what the “support for the women’s game” Burns mentioned actually consists of.

It’s not her best tweet is it Ben. I also think it’s not banter either. In my opinion very disrespectful towards the boys.

While England head coach Chris Silverwood wouldn’t be drawn into commenting on the matter in a virtual press conference, Burns, who last put pen to paper on a tweet of his own in May 2020, has reportedly been reprimanded by England. Notts have not spoken to Patel or Duckett about the matter and offered Wisden.com no further comment.

Still, maybe this is already making too much of a minor kerfuffle, and perhaps that’s where it should be left. Maybe we should just shrug our shoulders, say, ‘it’s just tweets’, and move on with our lives. Maybe. But it’s hard not to feel there’s more at play here, attitudes revealed and trends uncovered, not least because, when you’re a female sportsperson in the spotlight, moving on is easier said than done. Hartley has since tweeted about the “not so nice messages” she has received since the call-outs. “Remember there’s always a human at the other side, reading what you are saying,” she added.

Just woken up for the ‘night shift’.

Side note, a huge thank you to all the lovely messages I’ve received.

For the not so nice ones… remember there’s always a human at the other side, reading what you are saying. pic.twitter.com/S0kaIWnFo4

It’s worth dwelling, if only for a moment, on the rights and wrongs of Hartley’s original joke. Important, for context, is that, while it’s technically correct to call Hartley an England cricketer – she’s only 27 and has ambitions of a recall – her burgeoning career as a broadcaster is more relevant. She is no longer nationally contracted by the ECB, but has worked for both the BBC and the ICC covering last year’s T20 World Cup, and is currently providing punditry on BT Sport’s coverage of England’s series in New Zealand. She also hosts, alongside England seamer Kate Cross, No Balls: The Cricket Podcast. “Come for the stories, stay for the banter,” reads the tagline.

That makes it clear what the tweet really is, a joke tossed off by a media figure in the style for which they are becoming known, and an attempt as a fan to make light of and laugh about a tough-to-take result, as will be familiar to supporters of any team playing any sport, rather than a player in one national side taking a dig at another. A cursory scroll through Hartley’s timeline shows her supporting England, suggesting Joe Root might be better than R Ashwin, and generally willing them to win. Hers also isn’t a joke that targets or diminishes any one player, or even England’s performance. It’s a humorous attempt to find a positive from a chastening passage of play. That’s it.

It makes you wonder why Burns and the rest singled out Hartley in particular. There were punchier jokes, not to mention actual criticisms, made by a number of fans, journalists and ex-players in the aftermath. The charitable explanation is that they didn’t know about Hartley’s recent exclusions from England’s squads, which would say plenty in itself. But even if there had been something to take issue with, they put her in the firing line for a barrage of bile far outweighing anything sent the other way.

While Burns and Duckett said nothing abusive in their own tweets, the manner of their rebuttals, a public quote-tweet rather than a reply or a direct message, serves a particular function of pointing their followers in a particular direction. The vast majority of negative replies to Hartley have come since her tweet was flagged by the pair.

That result might not have been exactly intended, but it’s also naive in the extreme to not consider the consequences of your actions on social media, and the following that comes with being an international sportsperson brings with it responsibilities. When much discussion is being had about the dangers of anonymous accounts spewing hate with impunity, it mustn’t be disregarded that plenty of established users feel just as comfortable to direct that fury without consequence.

Women’s just sour. Women’s cricket is shit in general. Fast bowlers bowling 65 mph may aswell go down the local ground and watch a half decent 15 yr old open the bowling for the 2nd XI

I dont know one person who watches womens cricket.

The incident bears hallmarks of that involving Leeds United and former England footballer Karen Carney, who made a debatable footballing point, one agreed with by former Leeds player Jimmy Floyd Hasselbaink, and was subsequently called out by the club’s official Twitter account in a manner which it’s hard to envisage being done to a male pundit. The resulting pile-on was as you would expect, and she deleted her Twitter account soon after. The rules are different if you’re a woman in what’s still a man’s world. Make a joke or a state an opinion and you’re at risk of feeling the anger of a thousand pricked male egos. Research by Amnesty International suggests just under half of women online in the UK have experienced sexist and misogynistic abuse.

Duckett himself has spoken about the dangers of social media before, coming in for flak after tweeting “RCB’s team is a joke” back in 2018. He meant it as a compliment, but their fans didn’t take it that way. Even in that incident, it was a woman, his sister, who somehow ended up on the receiving end.

“People were going on Instagram finding photos of me and my sister, spraying my family,” he told the Wisden Cricket Weekly podcast in 2019. “I did have to delete some of them because they were being brutal.”

It’s just one of innumerable ways in which the world as it is is different for men and women, and it’s why any response to Hartley’s tweet suggesting that a joke with the genders reversed wouldn’t be OK misses the mark. Calling a women’s team ‘girls’ is rooted in decades of minimising them as sportspeople, and delegitimising women’s sport, in a way in which calling a men’s team ‘boys’ isn’t. Only a brief scan through Hartley’s replies is needed to see how many people still don’t take women’s cricket seriously.

A similar joke about women’s cricket would be jumped on to argue that funding should be limited, that the game isn’t economically viable. Any dolly dropped by a male cricketer is a chance to laugh at his misfortune. A similar chance shelled by a female cricketer is used to belittle the game as a whole. A sub-par Test match in the men’s game is blamed on the pitches, while any less-than-thrilling women’s Test leads to suggestions that the format persistently put forward as the pinnacle of the sport should be deprived from half of the world’s population.

The Covid-19 pandemic has thrown into sharp relief the precarious place of women’s cricket in the hierarchy, with everything possible done globally to ensure the men’s game continued and the rest little more than an afterthought. Promised contracts were put on hold, leaving women’s players in the lurch, until limited retainer deals were eventually offered. In this light, the end of Burns’ tweet in particular reads even worse. “Considering all the ‘boys’ do for the women’s game” feels almost like a threat, a step from telling the women to stay in their lane, know their place, lest the men revoke that support that we’ve just been reminded hangs so delicately.

There are, of course, ways to joke about and criticise sportswomen, and there are those, not least Hartley herself, who manage to do so successfully. Indeed, she was able to poke fun at her own batting ability after a report in The Times labelled her as an England batter – that the country’s newspaper of record couldn’t take even the most cursory look at her Cricinfo player profile and see a top score of three not out in 26 international games is another revealing sub-plot. But it must come from a place of affection for the game, as Hartley’s tweet about England’s men did, and as so many ‘jokes’ about women’s cricket do not.

Anyway, that really is enough on the matter. While England’s men are down 2-1 in India, England’s women have just completed a series victory over the White Ferns, and will look to do the same in the T20Is to follow. Catch them, and Hartley, on BT Sport.