There was a time when Virat Kohli seemed set to overhaul Sachin Tendulkar’s record of ODI hundreds. However, after three dry years, Kohli needs to make the most of 2023 to go past Tendulkar.

Two hundreds, two Player of the Match awards as well as the Player of the Series. It was the Kohli performance that cricket had got used to in the 2010s, a decade where Kohli scored an astonishing 42 hundreds in 220 innings – a rate of nearly one every five appearances at the crease. For perspective, no one else has had even 30 hundreds in a calendar decade.

For perspective, only four Indians – Tendulkar, Sourav Ganguly, Rohit Sharma, and Shikhar Dhawan – have managed more ODI hundreds in their entire careers than Kohli did in three years.

Speculations of Kohli becoming the first to reach 50 ODI hundreds took off during this phase. After all, he already had 43 after those Port of Spain hundreds, how long could it take?

Really long, as it turned out. It took him three and a half years to get that 44th hundred. Of course, one may argue that he played only 25 ODIs over this period on either side of a global lockdown, in an era when the focus kept oscillating between T20Is (there were two World Cups) and Test cricket.

Kohli scored 10 fifties in these 25 ODIs, including four scores in excess of 75, but that hundred never came. 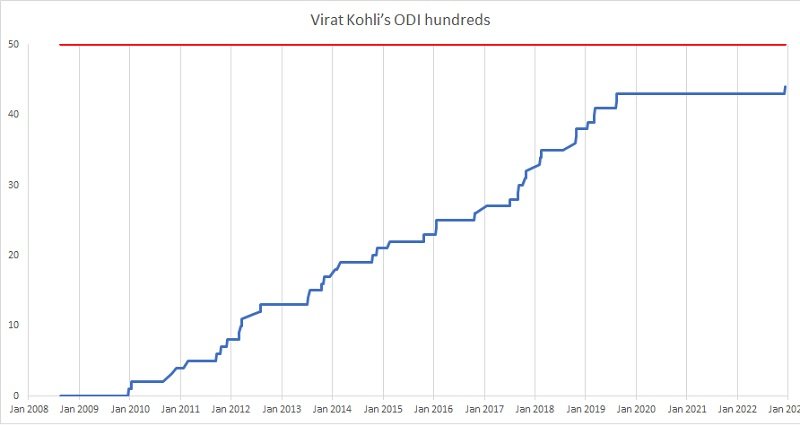 The 91-ball 113 in Chattogram put an end to that wait. It took its time, but the hundred-generating machine was finally back in motion, set for a relaunch in the new year.

Indian fans had spent part of the last days of Tendulkar’s career agonising in anticipation of a curious ‘across formats’ milestone of a hundred international hundreds. Tendulkar became the first to 50 Test hundreds, then got a 51st, but that somehow seemed insignificant when pitted against the wait for a contrived landmark.

During his golden run from 2016 to 2018, Kohli was touted to go past that milestone. The expectations had some roots in emotion, for the fans had seen Kohli carry Tendulkar on his shoulders after India’s 2011 World Cup triumph. Kohli’s famous 183 against Pakistan, his highest ODI score till date, came in Tendulkar’s last match in the format, signifying the unsaid passing of a baton.

But the expectations were not illogical either. Apart from the 15 ODI hundreds, Kohli got 14 in Test cricket between 2016 and 2018. By the time 2019 got over, he was already there, on 70 hundreds. One cannot blame the fans.

Unfortunately, it did not turn out that way. Given the visible drop in batting averages around the world in Test cricket, it was only a matter of time before Kohli – anyone, for that matter – went through a slump. And Kohli’s slump in the longest format felt more pronounced when pitted against his 2016-2018 phase.

He kept getting the T20I fifties, but however prolific one might be, T20I hundreds are rare. Chris Gayle is the most absurd hundred-scorer in the shortest format – all Twenty20, not only internationals – and even his tally stands at 22 in 17 years of batting in the format while playing cricket everywhere in every possible league that has existed. While it was in a T20I where Kohli broke his drought of hundreds, he was the first to admit that it was not the format he had expected it to be.

ODIs are, thus, Kohli’s best bet to continue on that Tendulkar trail. It was the format where he had led India to an Under-19 World Cup title, a Champions Trophy final, and a World Cup semi-final. It was also the format that defined him, where he could pace his innings his way.

Even before he had entered 2016, Kohli averaged 50.60 in ODIs at a strike rate of 90 – and that was despite the 2015 slump. He was an all-time great batter in the format even before his peak. The next three years merely catapulted him into unchartered territory.

In 2023, India play three ODIs against each of Sri Lanka, New Zealand, and Australia, all at home. In August, they tour the West Indies for three ODIs before hosting Australia again for three more just ahead of the World Cup, where they play a minimum of nine matches. Then they head to South Africa for three ODIs. The itinerary is not out yet, but if one assumes the ODIs in South Africa take place in 2023 (and not early 2024), India get to play 27 ODIs.

Four hundreds in 27 ODIs are not unrealistic expectations from a man who has amassed one every six matches despite having a tail at either end of his career (he had a lone hundred in his first two calendar years, across 15 ODIs).

After 2023, the focus will switch back to T20Is , for there is a World Cup in 2024. There will be a Champions Trophy in 2025, but that is not going to alter the ODI calendar significantly: barring that marquee tournament, India are slated to play only 18 ODIs between 2023 and the 2026 IPL.

By the time all that gets over, Kohli will be 37. This year, thus, is the one he has to make the most of, if he is to reach 50 hundreds. Once that is out of the way, who knows? Perhaps the buzz around a hundred hundreds will resume.