In a wisden.com exclusive, Lawrence Booth, editor of the Wisden Cricketers’ Almanack, calls for England all-rounder Ben Stokes to rediscover his mojo in ODI cricket.

Until recently, the idea that England could win the World Cup without a rip-roaring contribution from Ben Stokes would have been laughed out of town. He’s the team’s heartbeat, right? Their life and soul. Their very basis for negotiation.

But strange things are happening to Stokes’s 50-over game, and – with the World Cup less than a fortnight away – they are happening at precisely the wrong moment. Simultaneously, Stokes is in danger of becoming a less brutal batsman and a less influential bowler. There’s peaking for the big stage – and there’s whatever Stokes is doing. 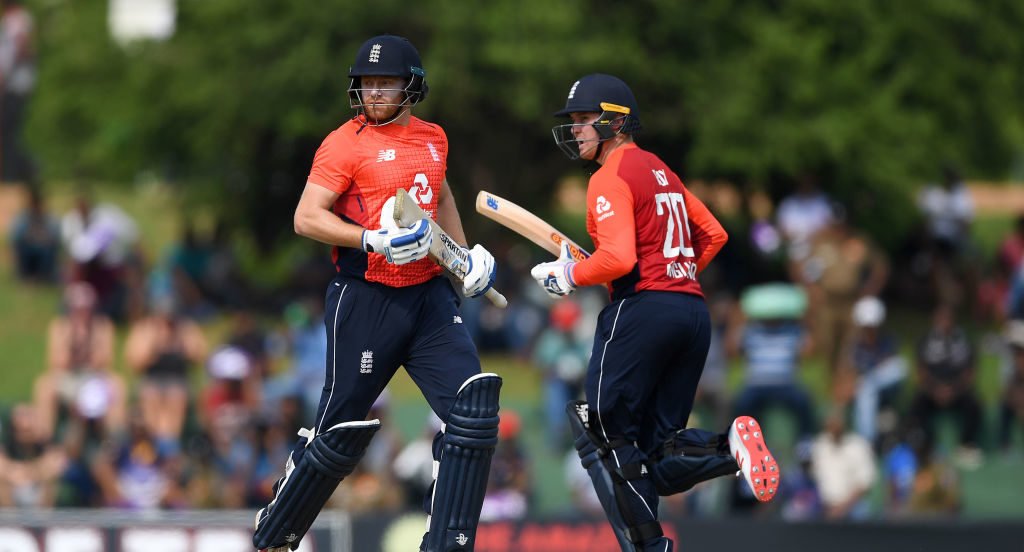 On present form, you would expect the 60-ball hundreds to be scored by Jason Roy, Jonny Bairstow, Jos Buttler, even by Eoin Morgan. And you would expect the decisive spells to be bowled by Jofra Archer, Mark Wood, Chris Woakes or Adil Rashid. Right now, Stokes – to nick the old gag about New Zealand’s Bob Cunis – is neither one thing nor the other.

This is not for a moment to suggest he should be dropped. He remains a force of nature, capable of erupting at a moment’s notice; he is one of the side’s best fielders, and among its hardest workers. England feel more competitive when he’s around, less intimidating when he is not. Whatever ‘it’ is, most agree Stokes is in possession.

Has Stokes reacted to the night in Bristol by trying to prove he really can be responsible?

But that should not allow us to gloss over what has happened to his one-day form since he returned from life on the naughty-boy step and the evening out in Bristol.

Before his arrest that September night in 2017, Stokes averaged 35 with the bat, with a strike-rate of 98 – figures consistent with England’s belief that 300 represents the bare minimum. Since his return, his average has improved, to 43, which is not to be sniffed at. But his strike-rate has dropped to 80: decent the last time England hosted a World Cup, in 1999, but faintly indulgent now. 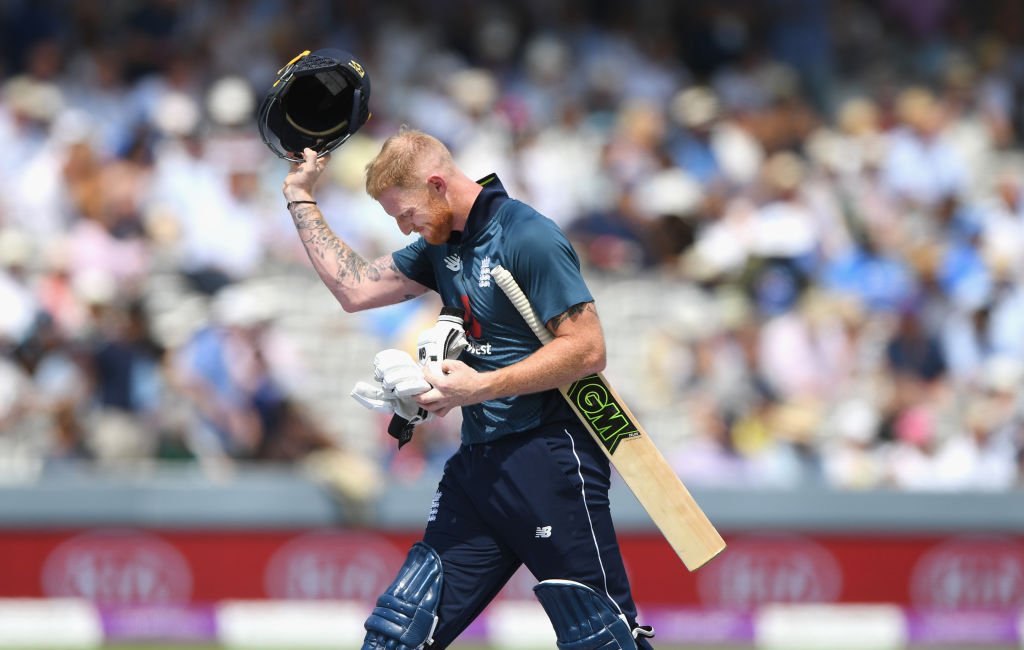 Ben Stokes reacts after being dismissed during the second ODI between England and India at Lord’s, July 14, 2018

Those figures include a cautious 50 from 103 balls against India at Trent Bridge last summer – England’s slowest one-day fifty for a decade. Yet England already have a player they can bat around: Joe Root. The job of the rest of the top seven, down to Moeen Ali, is to go hell for leather, consequences be damned.

Amateur psychologists can have a field day with this stuff. Is it, for instance, the case that Stokes has reacted to the night in Bristol by trying to prove he really can be responsible? Ali, a shrewd judge of character, hinted as much not long ago.

Related Story: When Roy and Archer served up a stinging riposte – Almanack

Then there’s his bowling. Pre-Bristol, Stokes’s one-day stats were 53 wickets at 38, which even then felt modest for a player of his ability. Post-Bristol – and before today’s game in Nottingham – the stats have gone in the wrong direction: 10 wickets at nearly 60. Only once in that time has Eoin Morgan entrusted him with a full quota of 10 overs. 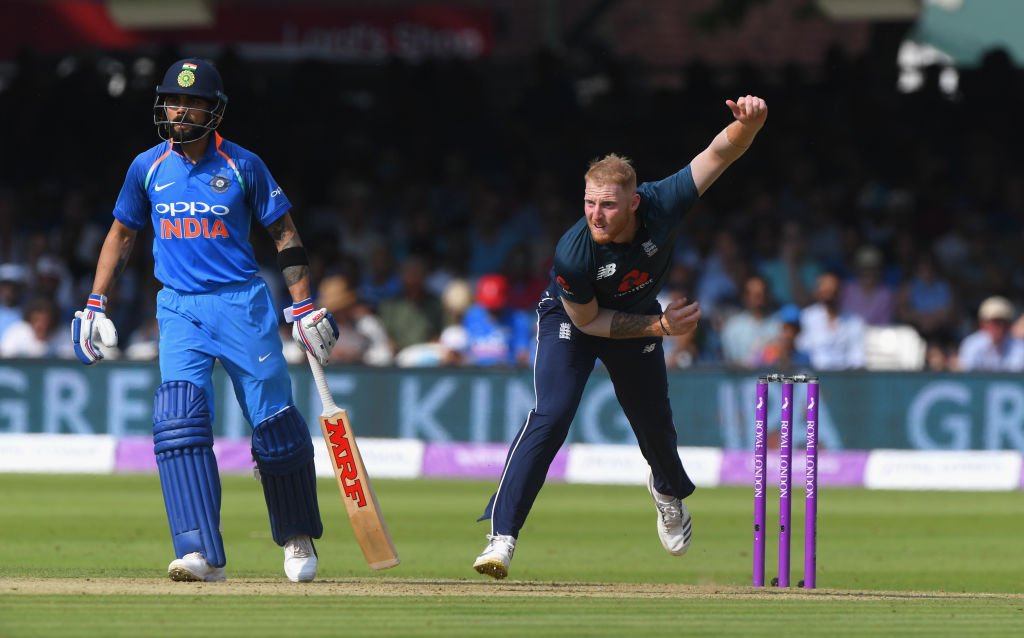 These are the numbers of a bits-and-pieces cricketer, not a fully fledged all-rounder who balances the side. More pertinently, they are not the numbers of a firing-on-all-cylinders Ben Stokes.

The point of all this is not to belittle a player who went through hell before and during his trial for affray, and then had to await the verdict of the Cricket Discipline Commission before he could properly get on with his career. The 2017/18 Ashes might have been a high point. Instead, it will go down as his greatest what-if. Less robust cricketers would have crumbled altogether.

But we should be able to make a gentle plea: can England please have back the Stokes who is capable of hitting his first ball for six, and of steaming in at 90mph, his face puce with rage at the idea that the bloke at the other end wishes him ill?

It was instructive to hear Mark Wood, ahead of the fourth ODI against Pakistan at Trent Bridge, nominate Stokes and Steven Finn as the fastest England bowlers he had played with – at least until Jofra Archer came along.

Maybe the World Cup will bring the best out of Stokes, restoring his reputation as a man for the big occasion. It just feels slightly counter-intuitive, unsettling even, that we need to raise the issue at all.

Lawrence Booth is editor of Wisden Cricketers’ Almanack, and a cricket writer for the Daily Mail