The 2018 Wisden Almanack has named three women amongst its historic Five Cricketers of the Year.

England World Cup-winning trio Anya Shrubsole, who also became the first female to appear on the book’s cover, captain Heather Knight and allrounder Nat Sciver were named in this year’s list, which is based on performances throughout the English summer.

Writing in the Almanack, which is published on Thursday April 12 ahead of the new English season, editor Lawrence Booth said: “This year, Wisden includes three women among its Five Cricketers – all members of England’s World Cup-winning squad. Previously, only two women have been chosen: Claire Taylor in 2009 and Charlotte Edwards in 2014.

“When Heather Knight lifted the World Cup at Lord’s in late July, it was the culmination of a personal tour de force that helped change women’s cricket for ever. Not only had she captained England with aplomb throughout the tournament, but her 364 runs at an average of 45 – including a century against Pakistan – were central to their success.

“No stroke in 2017 was more memorable than Nat Sciver’s deliberate deflection between her legs, instantly christened the Natmeg. But she was more than a one-trick pony. She hit 369 runs in the tournament at an average of 46 and a strike-rate of 107, including hundreds against Pakistan and New Zealand, took three for three against West Indies, and scored a half-century in the final against India.

“The World Cup was slipping away from England when Anya Shrubsole embarked on a trophy-winning spell of five for 11. She finished with figures of six for 46, the best in a World Cup final, and the status of a national hero. That followed her winning hit in the semi-final against South Africa, which England won by two wickets in the last over.”

The other two Cricketers of the Year were West Indian batting starlet Shai Hope, who made a strong impression in the Tests against England last summer, and Essex seamer Jamie Porter, whose terrific form helped guide the county to the Championship title in 2017.

“Shai Hope produced one of the individual performances of the year,” said Booth. “After West Indies had been thrashed in the first Test at Edgbaston, Hope made 147 and 118 not out to inspire them to a famous win in the second at Headingley. He was the first player in 534 first-class matches to score two hundreds in a game there, instantly making him the West Indian wicket all opposition attacks craved most.”

He also paid tribute to Porter’s superb contribution in domestic cricket. “Handed the task of leading the Essex attack, the 24-year-old Jamie Porter responded superbly. With his fast-medium swing and seam, he took 75 Division One wickets at an average of just 16 to inspire his team to their first County Championship title since 1992.” 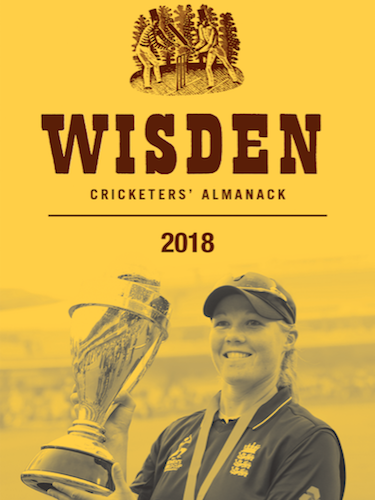 The Five Cricketers of the Year are chosen by the editor of Wisden, and represent a tradition that dates back to 1889, making it the oldest individual award in cricket. Excellence in, or influence on, the previous English summer are the major criteria for inclusion as a Cricketer of the Year, but no one can be chosen more than once.

MORE FOR YOUR MONEY!