Not the kind of wickets we really want to be playing cricket on, said Dale Steyn of the pitch at the Mangaung Oval in Bloemfontein on Wednesday, October 3.

The pitch looked a bit odd, Steyn later describing it as having a lot of plates. Very early on, Kyle Jarvis bowled Reeza Hendricks with one that shot through off a length, and soon after, Jarvis got one to jump and bite at Heinrich Klaasen from a similar area.

It didn’t get any better. If anything, after Steyn had struck his maiden international half-century to help South Africa get to 198, he and Lungi Ngidi, with their greater pace, made the Zimbabweans hop around.

The groundsman should be asked to come and bat on this pitch against @DaleSteyn62
What a shocker. One of the outstanding batting strips in SA gone to the dogs for an international game that they so badly need.#notgoodenough @mmbangwa @OfficialCSA

Craig Ervine copped one on the glove and then on the helmet off Steyn, and Brendan Taylor, Hamilton Masakadza and others also suffered. Enough for Makhaya Ntini in live commentary to say, “Wow, that’s danger!” at one point.

"We’ve got to go out there, we’ve got to do the business – both sides"

“The wicket obviously wasn’t the best, if I must be honest with you. It’s …” Steyn pulled his face to express vexation.

“I’ve been around and I’ve seen quite a lot of different pitches to play on, and it started off with Reeza’s … one where it didn’t bounce, and then you see some of the ones that were going through the top, hitting the splice of the bat, really just bouncing off lengths,” said Steyn, whose 60 was his first ODI half-century. 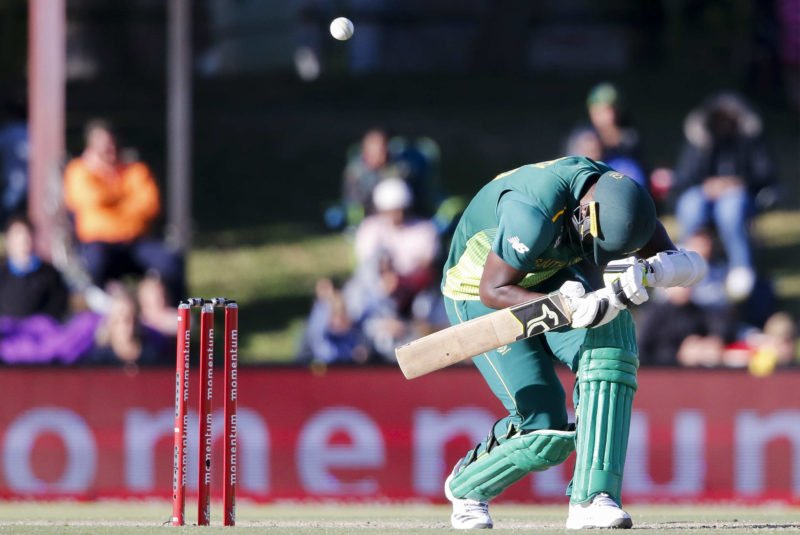 Batsmen from both sides were made to hop and fend

“Not the kind of wickets we really want to be playing cricket on. I thought Kimberley (first ODI) was pretty poor, and we thought it would just get better, coming to Bloem. And I’m hoping that Paarl’s going to be the best one. But we’ve got to go out there, we’ve got to do the business. Both sides. Pretty tough conditions.”

Depending on what the match officials say in their report, Bloemfontein could be in trouble, especially after a One-Day Cup game in March last year – between Knights and Warriors – had to be called off because of poor pitch conditions.

“I’m not really a groundsman, you know. What I can say is that I’ve played a lot of cricket here in Bloem before, I haven’t seen so many plates before, which kind of gives you the impression that if there’s one loose plate then it won’t bounce, and if there’s one solid plate, you’ll get one that just sort of takes off from the length. So, uhh,” Steyn trailed off.