Players and staff in the Kolkata Knight Riders (KKR) camp are ill and isolating, following which their IPL 2021 match against Royal Challengers Bangalore (RCB), due to be played on Monday, May 3, in Ahmedabad, is rescheduled.

Tonight’s game off in IPL. Player in Pat Cummins KKR tests positive. Nightmare. Story being posted on @australian website as I tweet with more details

According to the statement from IPL, “Varun Chakaravarthy and Sandeep Warrier were found to be positive in the third round of testing in the last four days. All other team members have tested negative for COVID -19. Both the players have isolated themselves from the rest
of the squad. The Medical Team is in continuous touch with the duo and are monitoring their health. Meanwhile, the Kolkata Knight Riders have now moved towards a daily testing routine to identify any other possible cases and treat them at the earliest.”

“The Medical Team is also determining the close and casual contacts of the two positive cases during the 48 hours prior to collection of the sample that returned the positive test results. The BCCI and the Kolkata Knight Riders prioritise the health and safety of everyone involved and all measures are being taken in that endeavour.” 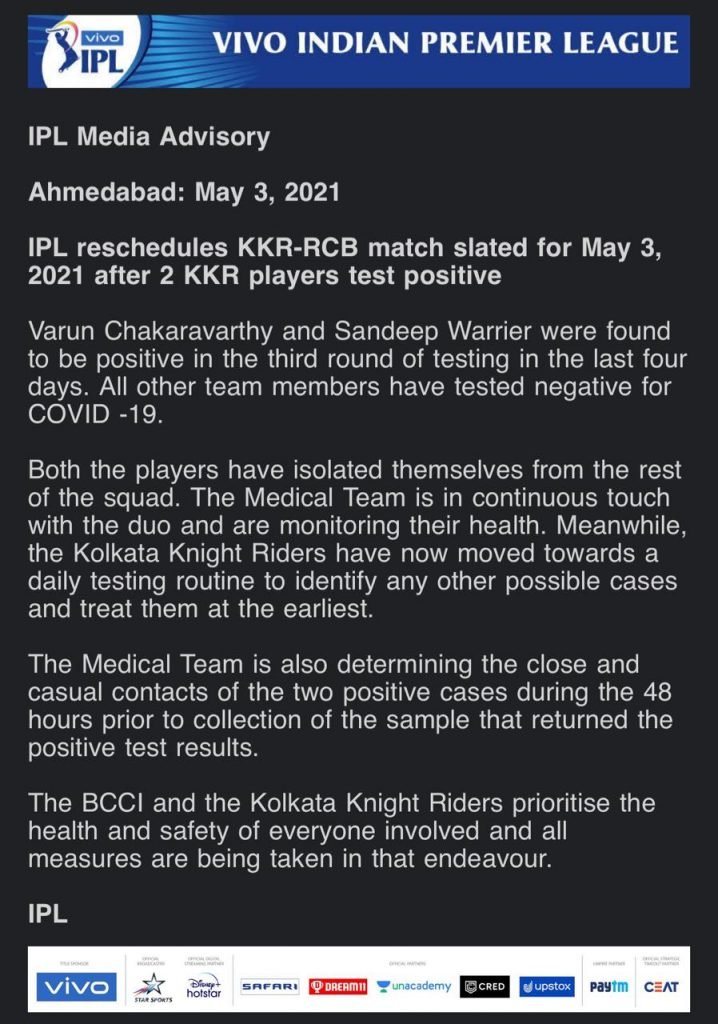 KKR are currently seventh in the points table, while RCB are third. The match was supposed to be the second fixture between these sides in this season. KKR do not play another game for five days, but given the isolation period, there are chances we could see a few tweaks in their schedule.

As per the medical protocol in the IPL guidelines, anyone testing positive within the bubble would need to be isolated for a minimum of 10 days at a pre-designated facility inside the bubble: “During the 10-days isolation, the individual will be tested on day nine and day 10. Two consecutive negative RT-PCR test results taken 24 hours apart, full resolution of symptoms, no fresh symptoms for more than 24 hours and no use of medications for more than 24 hours are mandatory for re-entry into the bio-secure environment. To account for any false positive tests due to historical infections, serology tests and repeat RT-PCR tests may be conducted.”

Various unconfirmed reports on CSK, some say it is not players but staff, either way people are freaking out