Sri Lanka opening batsman Dimuth Karunaratne was stretchered off the field of play during day two of the second Test against Australia, and has been admitted to hospital after receiving a blow from a Pat Cummins bouncer in the 31st over.

The ball, clocked at 142 kph, did not lift as Karunaratne might have anticipated, and it struck the 30-year old on the back of the head as he ducked, making contact where the bottom of the skull meets the neck.

Australia’s team doctor and Sri Lanka’s physio rushed onto the field after the player had immediately fallen backwards following the blow, losing grip of his bat and laying on his back. Thankfully, he was conscious throughout, and he was able to move his fingers and hands. 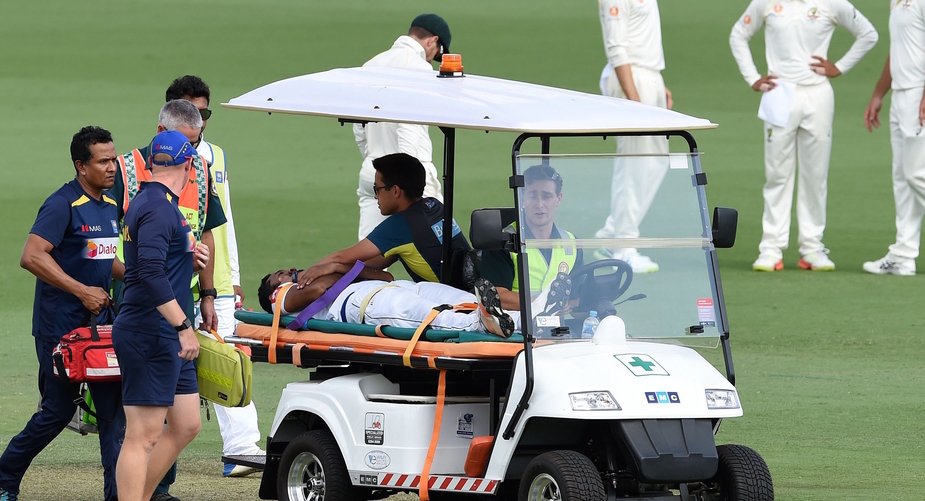 After a lengthy on-field assessment, Karunaratne was stretchered off the field

Having been fitted with a neck brace, Karunaratne was escorted off the field on a stretcher and taken to hospital for further assessment. Tim Paine, Pat Cummins and the Australia players kept a close eye on proceedings, many wishing the Sri Lanka man well as he was accompanied off the field of play.

Related Story: ‘They showed us what you have to be’ – Cummins says Australia ready for India challenge

Karunaratne was discharged from hospital a few hours later. A statement from Sri Lanka Cricket read: “Dimuth has been discharged from Canberra hospital following assessment and all cleared. A further update will be provided on his playing status tomorrow prior to play.”