Geoffrey Boycott has hit out at the BBC after being omitted from Test Match Special’s list of commentators for 2020.

The former England opener has been a regular fixture on TMS since 2005 but now appears to be on the way out. At the age of 79, Boycott’s presence in the commentary box for the West Indies series – to be played behind closed doors in bio-secure environments – was already deemed to be unlikely due to the coronavirus pandemic, although a BBC statement to the Guardian on Thursday did indicate the possibility of him making a TMS appearance later in the summer.

“Due to the current situation, Geoffrey is not part of the commentary team for the [West Indies] series,” a BBC spokesperson said. “However, we are monitoring the situation closely and we hope to look forward to him making an appearance on TMS this summer.”

In reply to the Guardian report on Twitter, a user tweeted: “White, male, straight, tory and knows about cricket. Surprised he lasted this long at the BBC.” Boycott retweeted the reply, writing: “Absolutely right.” He has since deleted the tweet. 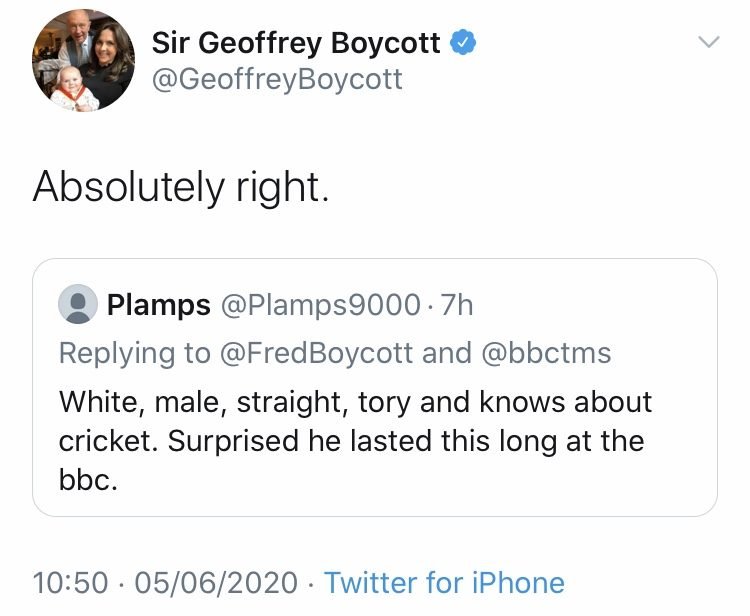 The former Yorkshire batsman received a knighthood last year in Theresa May’s resignation honours, prompting a backlash from domestic violence campaigners due to his conviction in a French court in 1998 for assaulting his then girlfriend Margaret Moore.

Boycott has since tweeted his thanks to TMS for his time as a commentator.

1/2 I would like to thank @bbctms @BBCSport for a wonderful 14 years. I have thoroughly enjoyed it and just love cricket with a passion. I also wish to thank all those that have said how much they have enjoyed my commentary and for those that haven’t- too bad.