Ben Stokes has admitted being relieved to have started the 2019 World Cup on a winning note, especially with the long-drawn build-up to the tournament, and the immense pressure that came along with it.

Stokes’ all-round display played a key part in England’s 104-run victory over South Africa at The Oval, their fifth win in an opening match of a World Cup held at home.

“The most pleasing thing is we have got the first game out of the way and winning like that,” Stokes said after the match.

“There has been such a long build-up to the World Cup and answering questions on it for about a year now, and now we are finally here and it’s nice to walk away with a win. There were a few nerves knocking about, there definitely was for me and I have not felt like that in a long time.”

On the field, Stokes showed little nerves, even as he came in to bat with the game in the balance. At 111-3, England had lost their top three (Jonny Bairstow to a first-ball duck) and still had to work their way towards a competitive total. Starting steadily, Stokes became freer as the innings progressed, as he forged a crucial 106-run stand with captain Eoin Morgan in the middle overs, and finished with 89 in his side’s total of 311. 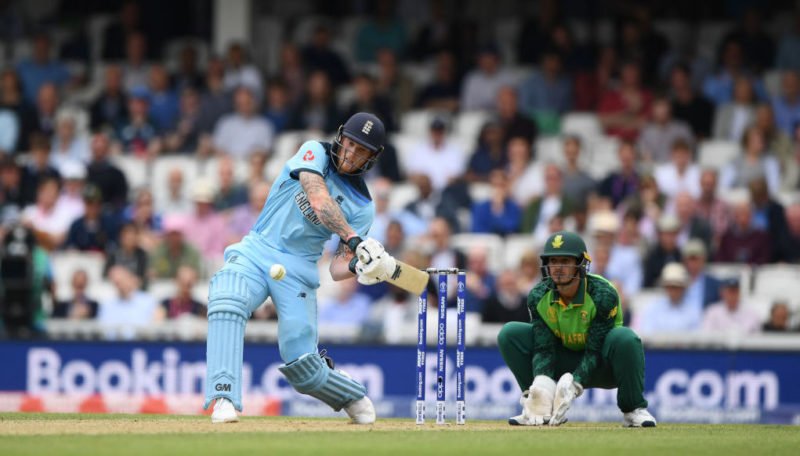 It was Stokes’ highest score in ODIs since his century against Australia at Birmingham in June 2017.

“The best thing about being an all-rounder is you can influence the game pretty much the whole 100 overs – it is always nice when you can contribute to the team winning,” Stokes said.

It wasn’t just about his batting – on the field, the livewire that he is, Stokes pulled off a sensational grab in the deep, a catch that would be talked about for ages.

Stationed at deep mid-wicket, he seemed to have misread Andile Phehlukwayo’s wild hog, but adjusted spectacularly to take a one-handed blinder, leaping into the air and pouching the ball almost behind his head.

“It was a fluke. To be honest, I was in the wrong position: if I was in the right position it would have been regulation. That feeling for about five seconds when I was facing the crowd and everyone was cheering, it was phenomenal,” he admitted.

He capped off the day with one more catch, a run-out and two wickets, finishing as the Player of the Match.

“When you do take catches like that, especially when you know you’ve started in the wrong position: made a relatively straightforward catch into a hard one – but I didn’t really know, quite hard to react, to be honest, I just tried to take it in.”