Australia had reasons to be positive on the whole, but their captain Tim Paine left the second day’s play of the Boxing Day Test against New Zealand feeling sour after a controversial DRS incident meant he was dismissed 21 runs short of a maiden Test century.

Paine and Travis Head, who scored 114, put on a 150-run partnership for the sixth wicket in Australia’s first innings but the stand was broken when Paine was adjudged to be trapped in front by Wagner.

Wagner was coming in from around the wicket, and although the New Zealand appeals were turned down by umpire Marais Erasmus, captain Kane Williamson decided to review the decision. DRS showed three reds, but Paine had his doubts. 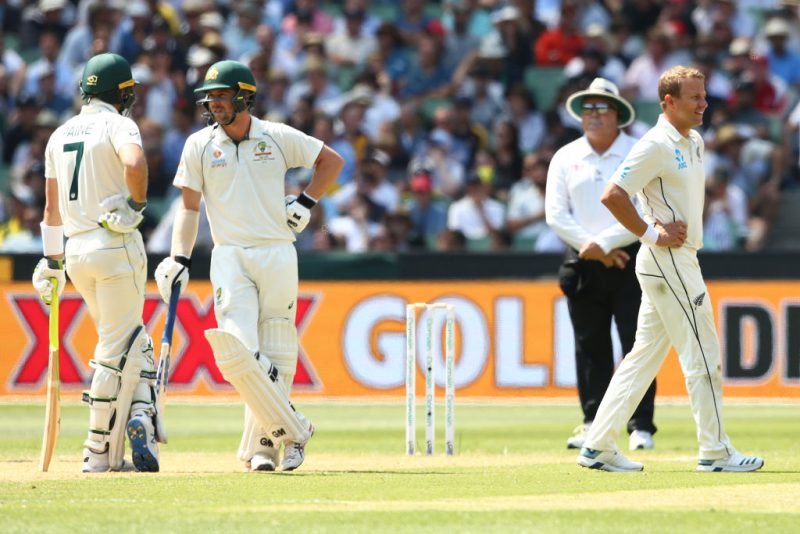 “I thought from the length it pitched, and the bloke bowling around the wicket, it’s pretty difficult to hit you in line, and hit the stumps,” Paine told ABC, the host broadcaster, with others echoing his scepticism.

However, that wasn’t the end of Paine’s struggles with DRS on the day. Late in the day, with New Zealand already two down, Ross Taylor was adjudged by the on-field umpire to be trapped in front, only to be saved by the review.

The ball was seemingly headed for the stumps, but DRS tracking suggested it would go over it, leaving the Australian players frustrated. Paine was then caught on the stump mics bantering with Taylor, saying: “That’s twice I’ve seen him dead out plumb, and not being given. I’ve seen Broady [Stuart Broad] hitting him in the pad in New Zealand, absolutely hitting middle stump that – [but given] missing leg. He [Taylor] knows the bloke in the truck.”

Later in the day, he elaborated on his doubts over the system. “You get one late tonight which, the guy’s stuck on the crease, he’s hit really full and it’s going over, so it’s disappointing and it makes me angry,” Paine said. “I’ve got a few doubts, no doubt about that.

“I won’t go into it too far because I’ll get in trouble, but I’m just seeing time and time again, what I see to the naked eye, or watching it on television in real time, and then what it comes up is sometimes a little bit off the mark.”

New Zealand will resume on the third morning at 44-2, with Taylor partnered by Tom Latham.