Nathan Hauritz, who played a handful of Test matches for Australia between 2004 and 2010, was at the receiving end of Jeff Thomson’s strong words in 2009 and has now responded to the Australian great on LinkedIn, stating “you can never take back” what you say.

Thomson had lashed out at the Aussie bowling ahead of the tour of South Africa in 2009, rating the Australian bowling attack to be no better than a “third-grade club side”.

“From what I saw of the Australian attack the other day, what they bowled was absolute crap. Every one of them was terrible,” he said.

“It looked like South Africa was playing a third-grade club attack. I’m not the only one who thinks that. What I saw the other night was just gun-barrel bowling. There was no creativity,” Thomson was quoted as saying by Sunday Telegraph.

Thomson had a real go at Hauritz and Mitchell Johnson too.

“Nathan Hauritz should be called Nathan Horror. Does he spin the ball? They have to take Jason Krejza, at least he turns the ball. Mitchell Johnson looks tired. He’s bowling so round-arm at the moment you may as well call him Mitchell Malinga,” Thomson said.

A few months later, before the Ashes, Thomson would take another dig at the off-spinner, calling Ricky Ponting a “shit captain” for persisting with Hauritz.

“He [Ponting] has got a bloke in there who can’t even spin a ball (Nathan Hauritz). Simon Katich and Michael Clarke have more chance of taking a wicket than Hauritz. Why go for a guy like that? I don’t rate Hauritz,” Thomson wrote in The Age.

Responding to Thomson more than a decade later, Hauritz wrote in a LinkedIn post that he wasn’t “prepared for how hard that life can be”. In a lengthy post that had a picture of the Thomson article from the Sunday Telegraph, Hauritz wrote that “the world is hard enough without all that external noise”.

“Thommo [Thomson] and I have seen each other numerous times since this article, had a beer and acted like nothing had even been said,” Hauritz wrote. “The game isn’t easy and every player and every person has their own struggles in sport and in life. I know (now) when he said this, he wasn’t having a personal attack against me, it’s his job to be controversial, it was his job to make headlines. Did it hurt? Did it make me never want to talk to him again?? 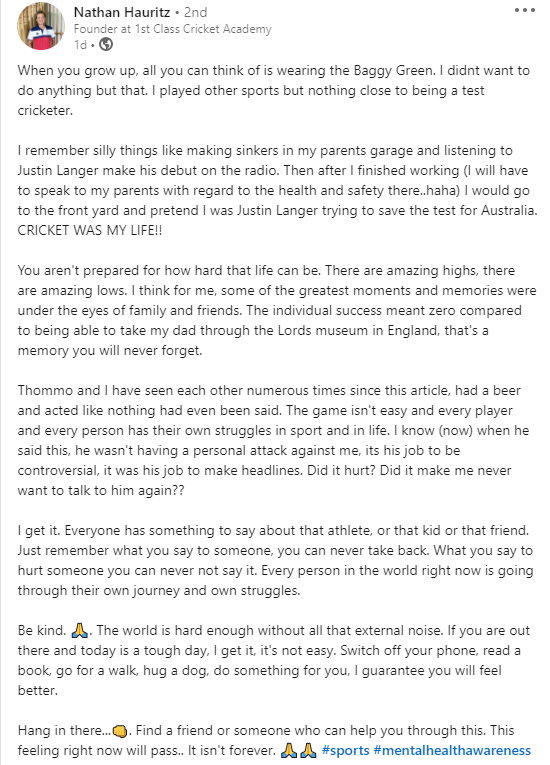 “I get it. Everyone has something to say about that athlete, or that kid or that friend. Just remember what you say to someone, you can never take back. What you say to hurt someone you can never not say it. Every person in the world right now is going through their own journey and own struggles.”