Mitchell Starc is likely to miss out on selection for Australia’s limited-overs tour of India later this month due to injury, according to reports in the Australian media.

The tour is set to serve as preparation for this summer’s World Cup, with the two sides set to play two T20Is and five ODIs. Australia are also set to embark on a limited-overs trip to the UAE in March, taking on Pakistan.

According to The Australian, Starc has a soft tissue injury in his upper body and could be in a race against time to feature in the World Cup, with all teams having to announce their squads by April 23. 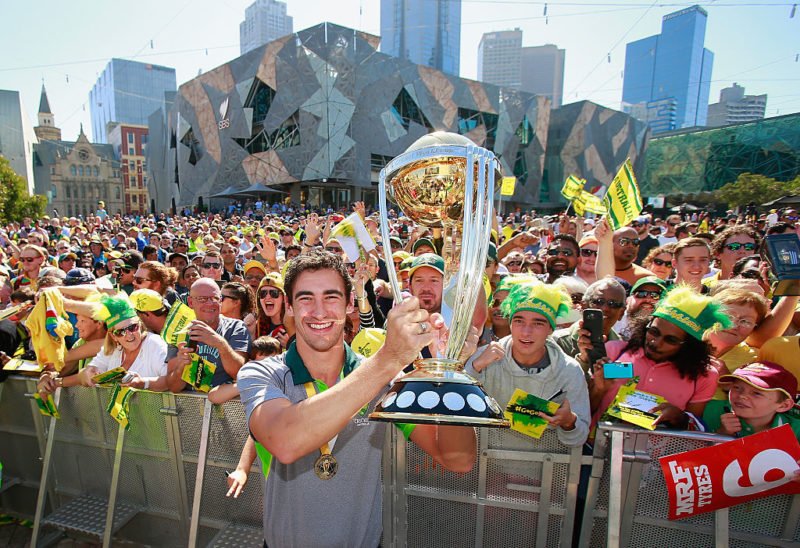 Starc was named Player of the Tournament in 2015, finishing the World Cup with 22 wickets

Starc, who was the joint-leading wicket taker at the 2015 World Cup, starred in Australia’s recent Test win over Sri Lanka in Canberra, collecting match figures of 10-100 in the 366-run victory.

The left-arm paceman’s injury is a major blow to Australia’s preparations for the defence of their title, with fellow seamer Josh Hazlewood also currently injured, after a stress fracture in the back ruled him out of the Sri Lanka Test series.

Related Story: Rob Key: Langer’s a numpty, Steve Smith is the reason for Australia’s Ashes dominance
Furthermore, while Justin Langer has signalled his intention for the currently suspended duo of Steve Smith and David Warner to be included in the 15-man squad for the tournament, both batsmen are currently nursing elbow injuries, and speaking on Tuesday, Langer admitted that their reintegration into the side will have to be carefully managed.

“We’ve got to keep working on how they are with their elbows, first,” said Langer. “They’re going to need to get some cricket before coming back into the squad. It’s all part of the management. We’ll have to wait and see and what happens there.”