A three-wicket haul from skipper Moeen Ali and Ben Cox’s 27-ball 46* took Worcestershire to a five-wicket victory over Sussex in the final of the T20 Blast at Edgbaston on Saturday, September 15.

Sussex skipper Luke Wright won the toss and decided to bat first. An eight-ball 17 from Philip Salt helped them fly to 19 runs in just two overs when Salt was dismissed by a direct hit at the bowler’s end from Brett D’Oliveira. However, a 58-run stand between Laurie Evans and the captain helped neutralise the effect of the early wicket.

Wright was bowled by Ali for a 25-ball 33 halfway through the innings and was replaced by Bermudian Delray Rawlins. Evans played extremely well to notch up his half-century in the 16th over and added 44 runs with Rawlins for the fourth wicket.

But Ali’s 3-30 broke the spine of the Sussex batting. Each time they looked to switch to top gear, the Worcestershire captain came up with the goods to stop them in their tracks.

The off-spinner scalped Rawlins for a 16-ball 21 with a tossed-up delivery and followed it up by dismissing David Wiese in his very next over. The two wickets ended up putting pressure on Evans, who tried to find new ways of accelerating the scoring rate and was dismissed attempting a reverse scoop in the 18th over.

The innings fell apart after that, as the lower-order batsmen could barely the clear the boundary. Worcestershire conceded just 10 runs in the last two overs, pulling things back nicely to restrict Sussex to 157-6 and set themselves up for a comparatively simple chase.

Worcestershire got off to a solid start with Joe Clarke and Ali, their captain, stitching a 61-run partnership together for the first wicket before the former was dismissed by Danny Briggs in the seventh over for a 27-ball 33.

Ali continued to fire from the other end and did not succumb to the pressure despite the quick wickets of Tom Fell and D’Oliveira. The Worcestershire skipper’s 27-ball 41 with six fours and one six was crucial to the victory.

But the real architect of the Worcestershire’s chase was Cox, who came in at No.5 and dictated the flow of the game. He blazed away, hitting five four and two sixes in his match-winning innings.

? “I couldn’t be more proud of the way we’ve gone about it.” @lukewright204 reflects on tonight’s defeat and our @VitalityBlast campaign. #SharkAttack

Cox, who was adjudged Player of the Match for his unbeaten effort in the 158-run chase, later said, “It’s hard to put into words. Today’s been my day. Credit to the boys for this fantastic effort.

“We grew up together, most of us, now we can enjoy our success and soak it all in. It’s one of those days and we are never going to forget it.”

As for Ali, it was a fresh high after playing a big role in England’s Test series win over India. 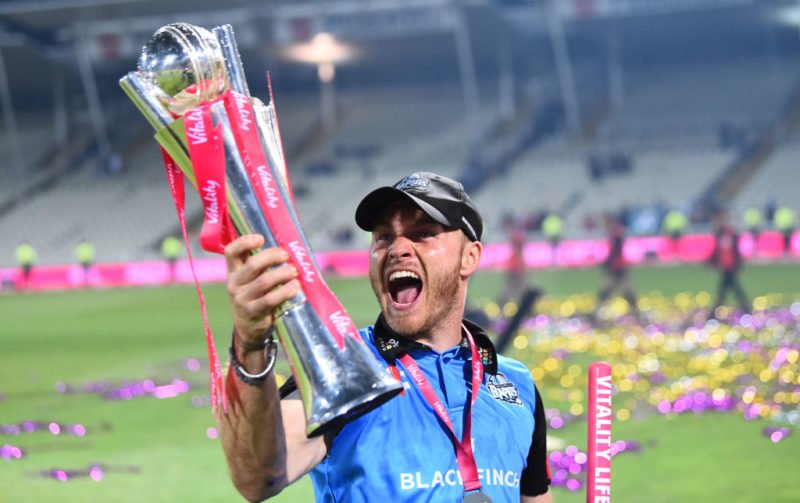 “Today’s been my day”

“The guys deserved it. As a club, we deserved it, the way we’ve been playing throughout the year. Today was special for us as a group. Everyone chipped in at some stage and we’ve been doing that all year,” he said.

Wright, on the other hand, has taken the loss on the chin and is proud of the way his team performed in the lead up to the last game.

“People like Salty (Salt), Rawlins to get this experience (is amazing), and they have stood up and had some amazing performances for us and it’s great. We have no overseas players, we chose to back our own as well. I couldn’t be more proud of the way we’ve gone about it. It’s tough to lose, but as a whole, we’ve done ourselves a lot of justice,” he said.