It took mere minutes for Virat Kohli’s look of shock at his dismissal by Adil Rashid to become a Twitter meme. But though the moment that caused it deserved the reaction it induced, there were many moments during India’s performance which might have left their captain lost for words.

First though, let’s focus on Kohli’s dismissal itself, a ripping legbreak which pitched leg and hit off. Kohli had batted like the world-class player he is on his way to a run-a-ball 71 and yet was beaten all ends up, not the first time Rashid has done so to him in this series.

Adil Rashid proving it’s not just India who have a world-class wrist-spinner in their ranks.#ENGvINDpic.twitter.com/Iecb6E0C07

Shane Warne would have been proud, and there were no shortage of pundits clamouring to label it ‘the ball of the 21st  century’. Kohli’s expression, an :O that befitted World Emoji Day, wasn’t misplaced, but no one should be surprised at Rashid, fully established as one of the world’s premier exponents of his art, flummoxing the world’s best with flight, guile, and most of all turn.

Soon, wags on social media were wondering what else Kohli could have been reacting to. The revelation in ‘Sixth Sense’ that Bruce Willis was a ghost the whole time and the fact that the final over of the ECB’s mooted 100-ball competition would comprise 10 balls were two popular suggestions, but they could have equally looked at any number of aspects of India’s largely self-defeating performance which would have left any captain slack-jawed.

There was MS Dhoni, whose 42 from 66 balls today only a slight improvement on his  37 from 59 at Lord’s, his ‘too old for this sh*t’ demeanor seemingly having tipped from grudgingly saving his country to giving up without trying.

There was the slew of boundary balls offered up early on by India’s pacers, which began from the very first ball of the reply, short wide and caressed to the fence by James Vince, deputising for the injured Jason Roy, and then allowed Jonny Bairstow to race to 30 from 13 balls.

And finally and fittingly there was the no ball bowled by India’s leg-spinner Yuzvendra Chahal which would have had Joe Root stumped late in the piece, and instead cost an extra five runs, with the free hit dispatched over midwicket for four.

Related Story: Kohli names Jamieson as “very shy” days after latter refused to bowl to him with Dukes balls

Some aspects can be dismissed as aberrations, or at least mitigated. Bhuvneshwar Kumar in particular is better than he showed, returning without match practice and suffering for it, and lesser teams will still surely succumb to Chahal and Kuldeep Yadav. But India’s over-reliance on their top three, the undeniable truth that Dhoni’s career is in its twilight, and the nagging feeling that Kuldeep might just be losing some mystery, and with it some potency, should worry Kohli and co. 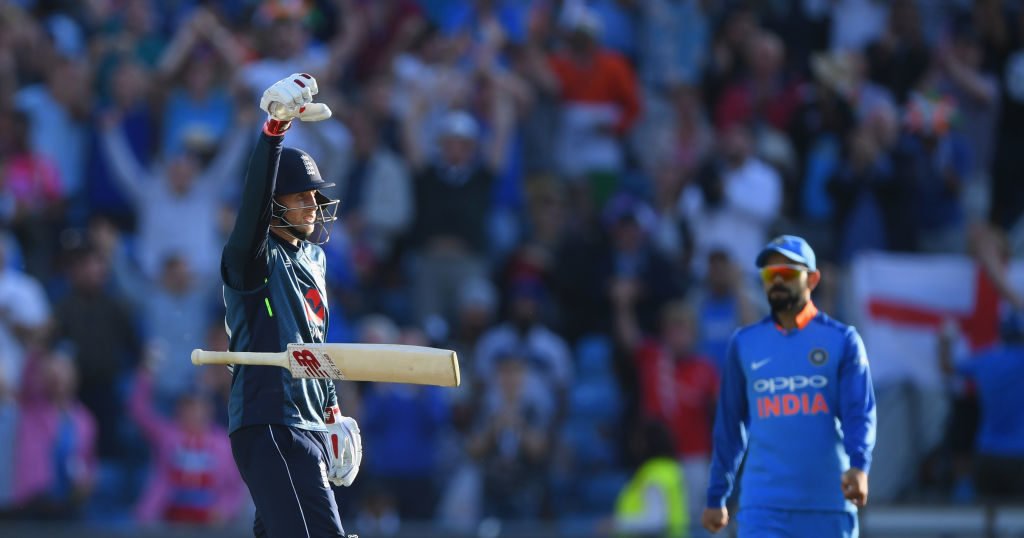 The bat drop, coming soon to a cricket ground near you

Between those helping hands, England barely had to get out of second gear, but they still played well, and there was much to please the team management about this performance in a game billed as a potential World Cup final preview, a series decider between the two favourites for that tournament.

All the talk this series has been about India’s wrist-spinners Chahal and especially Kuldeep, and yet on a helpful surface, both were comfortably outbowled by Rashid (3/49) and Moeen Ali (0/47). The former was as incisive as he was economical, ripping the heart out of India’s middle order and ensuring they were always chasing the game. 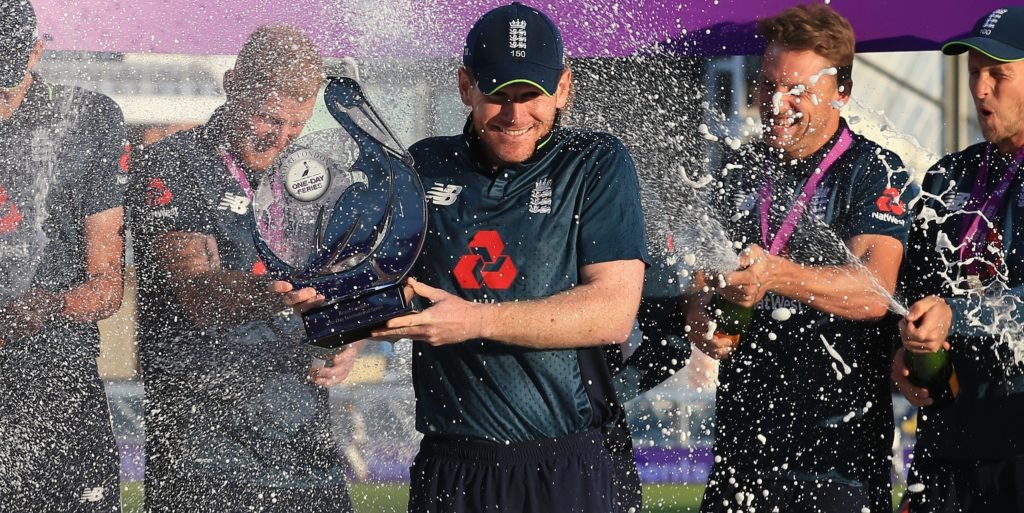 Mark Wood was the most parsimonious of the lot, conceding exactly three an over from his 10, despite bowling at the top and in the death, while David Willey completed a series which may well be seen as his coming of age as an international all-rounder with splendid figures of 3/30.

With the bat, there were fewer pressing questions for England to answer, apart from the one of how to fit them all in once Alex Hales returns from injury – James Vince running himself out for 27 at least ensured another batsman didn’t throw his hat into the ring. Root’s place should never have been in question – he averages over 50 with the bat in ODIs and strikes at over 85 – and he again showed his value in a chase that could have been tailor-made for a player of his skillset – below-par and with no need for rushing – while captain Eoin Morgan was just as good, if not better, in making 88. 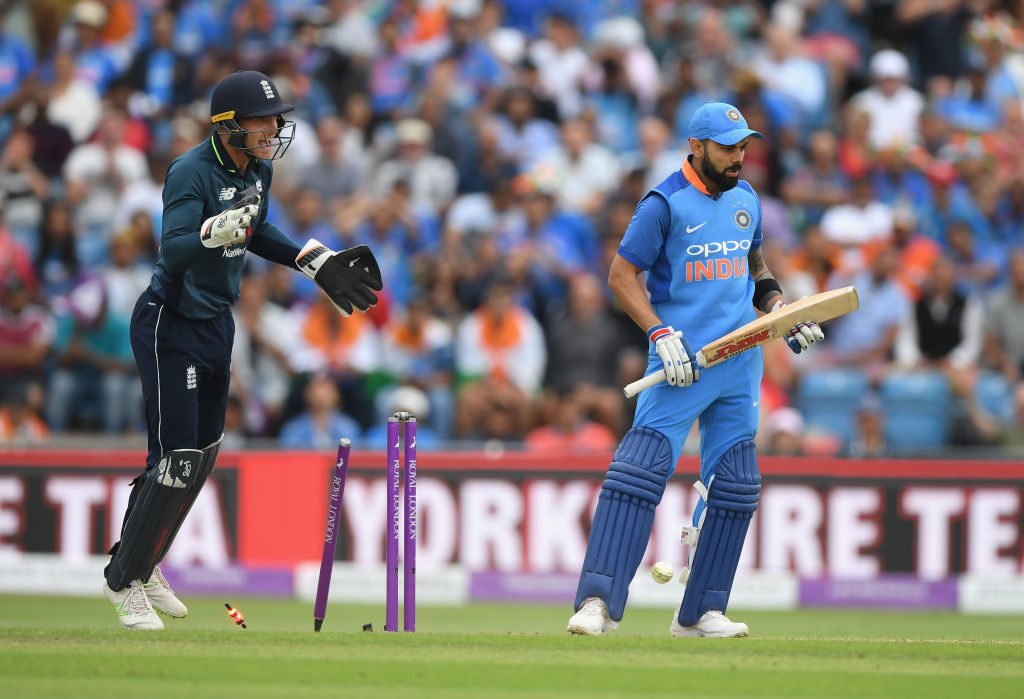 Both played the wrist-spinners without fuss, taking them for a combined 10 boundaries, something which should give England great heart heading into the Test series and next year’s World Cup, safe in the knowledge that it can be done, but perhaps most encouraging of all was the general tone of England’s performance. There was no panic when India were 125/2 and Kohli was looking ominous, and no madcap dash towards the finish, the kind which has stained some seemingly sealed chases against Australia and Scotland in recent months.

When, with one needed, Root clubbed a high full toss to the midwicket fence to bring up a glorious hundred, before bat-dropping to spark more social media frenzy, there was the sense that England could hardly have planned it any better. They have come through their biggest test ahead of next year’s World Cup, and no one can doubt they are favourites now.

But however well England played, the defining image from this clash will always be Kohli’s face, that look of shock and speechlessness. After a performance that was close to being abject, he will need to speak up soon. Less than a year out from the World Cup, India need answers, and fast.